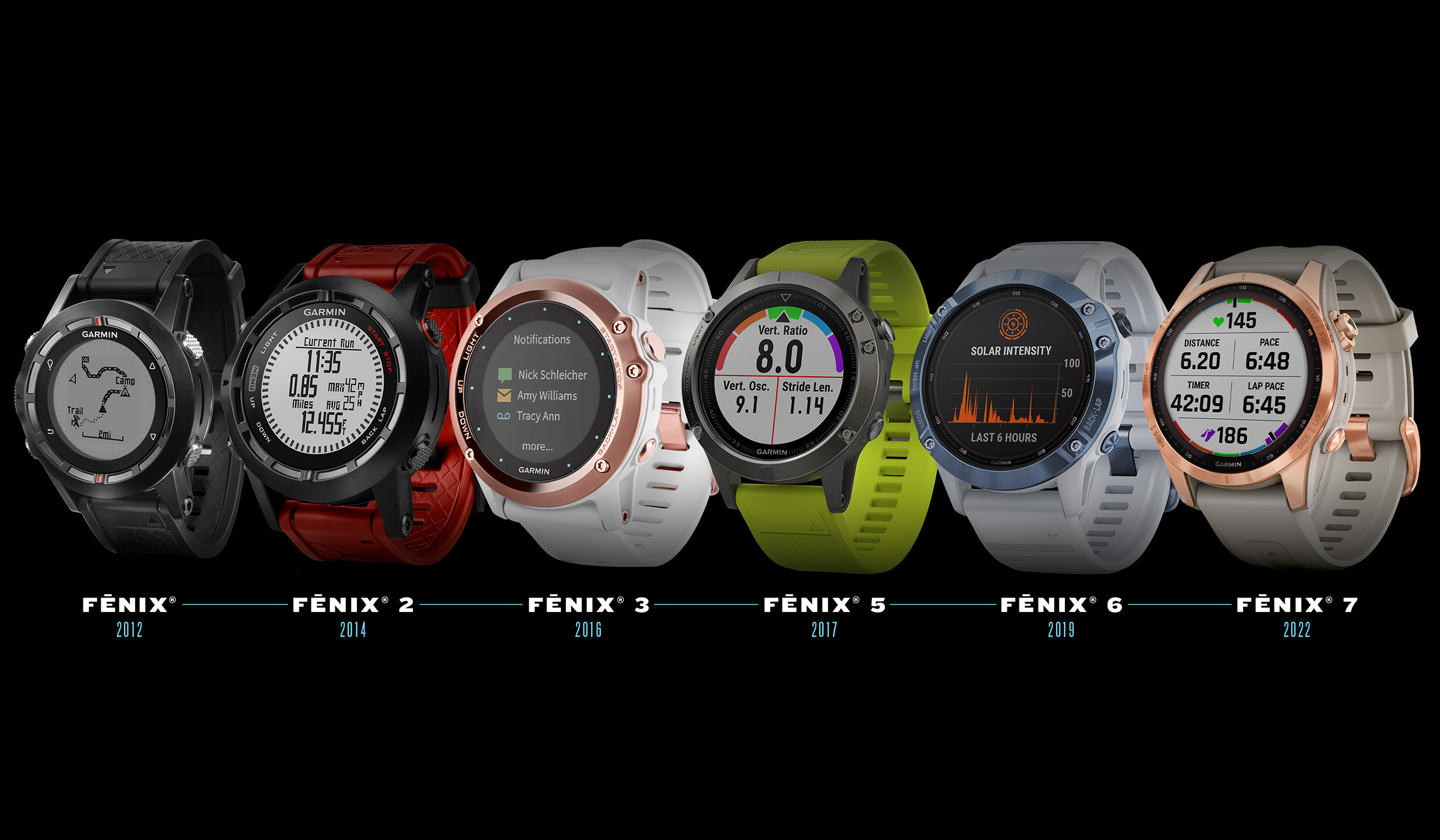 The Garmin fēnix® purpose-built smartwatch celebrates its 10th anniversary this year. In the consumer tech world, where entire companies can rise and fall in what seems like the blink of an eye, saying one product line has been around 10 years is something to celebrate.

Launched in 2012, fēnix has grown over the last 10 years from a simple of idea of “How can we better serve our outdoor customers?” to become one of Garmin’s flagship products, chosen by outdoor enthusiasts, elite athletes around the world and everyday customers who simply want to be more health/fitness conscious.

To celebrate fēnix’s 10th anniversary, Jon Hosler, fēnix product manager who has worked on fēnix since the beginning, weighs in on the major technologies within the fēnix product line and what they mean to customers.

The Garmin fēnix line: Something to be proud of

When I think of what fēnix is, I think about its core tenets of performance design, trusted tool, advanced training and everyday utility encompassed by the larger idea of this product always embodying rugged performance. Over the years, the team has worked to make fēnix more than just a watch — it’s a tool to help people in every aspect of their lives, and I am proud that through each iteration of fēnix, we have stayed true to these core tenets.

I think I’m most proud when I get to hear stories about all the amazing and inspiring things that our customers are doing with fēnix smartwatches. Hearing a customer let us know that their watch helped them run a marathon, climb a peak, hike a trail or complete a triathlon is what motivates me and makes me most proud of what we have created. When someone trusts fēnix as a companion on their wrist and relies on the enabling technologies that our team creates, it’s a testament that what we’re building matters and is truly helping people achieve their goals.

The more technology you can incorporate on a finite amount of space (your wrist), the more value you can provide to a consumer. In 2012, Garmin had already made watches for different segments like running and golf, but handhelds were still a significant, established market for Garmin. So, we thought to ourselves, “Well, obviously hikers have wrist,” so how can we incorporate our well-loved outdoor technology into an outdoor watch?

Thus, the fēnix line was born.

The original fēnix was very focused on the outdoor consumer, and there really wasn’t anything like it in the outdoor space, so we saw dedicated outdoor enthusiasts gravitate to it. They loved the robust battery life (for the time), metal rear case and functional utility, which created the most rugged and functional outdoor watch at the time.

The lessons learned from launching fēnix 1 really set the stage for what fēnix would become, and through all its iterations, this idea has been kept as the ethos of what fēnix is as a product.

We took what we learned from fēnix 1 and expanded features to offer a full suite for people who weren’t just dedicated outdoorspeople, including running dynamics, heart rate compatibility, cycling features, etc. It kept its outdoor spirit, but the fēnix 2 offered a competitive response to other multisport watches on the market. I would consider fēnix 2 the first comprehensive outdoor active lifestyle device, and it was the first time that we were able to bring everything we wanted together in one package.

The physical form factor was still rugged, which people enjoyed about fēnix 1, but its feature set was broad, so it really started what would become one of the main value propositions of the fēnix brand — a tough device that can do it all. While the original fēnix focused more on navigation, the fēnix 2 added in multisport training so users could learn more about their running, climbing, riding, hiking, skiing, swimming and other activities.

In hindsight, it was fēnix 2 that really foreshadowed what fēnix would eventually become known for — a trusted tool for all aspects of customers’ lives.

The fēnix 3 series saw noteworthy feature upgrades. Two that really stand out are the EXO™antenna and color display. Up until this point, most GPS watches on the market were using a plastic front casing, because if you put metal on the front housing, it would block the watch’s antenna from getting reception. We were able to develop the EXO antenna technology, allowed for a hardware design that combined form and function, essentially making fēnix a tougher smartwatch that could do more. Additionally, this new EXO antenna made GPS fix time significantly faster. What’s not to like?

The color display was a continual goal we had been working toward with fēnix and one of the reasons fēnix is a household name today. What made the fēnix display so unique was that it was a still a memory-in-pixel (MIP) display, which allowed for an ultralow power display that was designed for outdoor use. This was a significant technological jump in the wearables market. Having a sunlight-visible, low-power display is still a unique part of the fēnix story to this day.

fēnix 3 also boasted the introduction of wrist-based heart rate as well as a white/rose gold bezel and wristband combination. The importance of the wrist-based heart rate cannot be overstated, because it allowed for the expansion of health and fitness features that the fēnix line is known for today. With the introduction of new color combinations, the fēnix moved into a more everyday utility space for individuals who didn’t want a black watch. It was also important to note that while this watch may have had a different aesthetic, it did not sacrifice any functionality or features, making it truly a watch that could be worn to a meeting or on the side of a mountain.

fēnix® 5: A fēnix for every (sized) wrist

As the popularity of fēnix really caught on, we knew that one size didn’t fit all, because not everyone has the same size wrist. So, it was leading up to the fēnix 5 series that we started working on two smaller sizes — a 47 millimeter and a 42 millimeter. Until this point, all fēnix were a larger 51 millimeter size.

On surface level, it would seem creating a smaller version of the watch would be as simple as taking the parts and making them smaller, but that isn’t the case. To create a different size, you essentially have to entirely redesign a product and get very creative to make all the puzzle pieces fit together and be as effective as the larger size.

As we honed those technologies, we were able to make them work and bring that (and other) technology into a smaller size, which resulted in the fēnix 5S. The benefit of this design meant fēnix was able to be more comfortable on individuals with smaller wrists, which provided an overall better experience for customers.

At the same time, we were able to incorporate more features to make fēnix more of a daily companion. These included music, maps and mobile payments.

fēnix® 6 family: Under the sun

Perhaps one of the most revolutionary new features to come to fēnix was the incorporation of solar charging and the largest round MIP displays on the market in the fēnix 6X series. Since its 2019 incorporation, solar charging is now integrated into many Garmin products and has changed what people have come to expect from their wearables in terms of battery life and user experience.

fēnix customers love to be outside and be active, and solar incorporation provided two very important things. First, it’s working all the time, and customers don’t have to think about it. It just benefits them throughout their lives, constantly harvesting energy. Second, throughout the entire development process, every decision was vetted to bring customers the solar charging in the most efficient and effective way possible. The fēnix 6X, and other solar units, are highly capable and purpose-built for high performance, and they are rugged enough to keep up with our customers wherever they go.

I really feel as though this leap in technology was important for Garmin and its customers, because it met the combined expectation of great engineering and great design. We brought in this new, revolutionary technology, yet we did it in such a way that our customers don’t have to worry about it. Because solar technology is always there for them and always working, it’s a benefit with no trade-off.

There are two features I am most proud of with the fēnix 7 — the incorporation of a flashlight and the touchscreen. When we consider new features for fēnix, one of the first words that comes to mind is “utility,” and both features knock it out of the park.

We all know how much people use the flashlight on their phone, so we knew the validity of having an easily accessible light. However, I was taking an especially critical eye when I received the first prototype for testing, because Garmin will never put a gimmick into one of our smartwatches, and we want to honor the fēnix reputation as a trusted tool for everyday life.

To me, utility means more than just outdoor utility — it means everyday utility. That first weekend testing the prototype, I couldn’t stop using it. I was completely blown away by how much I was using it. And I wasn’t even using it for outdoor stuff; I was using it for basic activities like walking around at night.

At that point I was really excited for the potential of that feature. However, it was when I used it in an outdoor capacity that I knew the integrated flashlight would be something customers would really gravitate toward.

As an example, around this time I was caving with my son and his headlamp broke. I gave him my headlamp, and I used the fēnix to get us back out. It was later during that camping trip that we had a bad thunderstorm, and my son got scared and asked if we could head home. I popped on my flashlight, and both of my hands were free to pack up camp and ensure our safety.

The second item that really stands out to me on fēnix 7 is the touchscreen. To fully understand the touchscreen, it’s important to understand why Garmin uses buttons, which goes back to the core tenet of fēnix — buttons are a trusted tool. You can use them in any environment or circumstance, whether you’re swimming or wearing gloves. They’re always there and always going to work.

It’s for this reason we kept the buttons on fēnix 7. However, there are many aspects in which touchscreens are intuitive and enhance the fēnix experience. For example, when panning across a map, quickly swiping for information or entering data, a touchscreen streamlines usability. This added value to the customer has been very well received.

fēnix 7 is the best fēnix iteration we’ve developed yet, and I’m excited for what the team comes up with the future.