We hope you enjoy this guest blog from Maury Harris, wife, mother, marathon runner and author of the blog myheartracesblog.com

As a twenty-two time marathon runner, wife and mother to four (amazing) kids, I get asked a lot of questions. People are curious about my routine, my preferences when it comes to training, gear, food, and everything in between.

“How many days a week do you run?”

“How many miles did you run this morning?”

“Do you run with a water bottle belt?”

But, every once in a while I am asked one question that always catches me a little off guard, “Why? Why do you do it?”

Why do I do it? That’s a good question. It certainly would be easier not to, right?

My delayed response is usually edited to make the most sense to whoever it is that asked the question. The goal is to respond in such a way that doesn’t make me sound crazy or obsessive:

The truth is that asking me why I run brings to light all that it has given me, and all that I have become since the very first day I decided that I was going to run. The truthful answer isn’t easy to condense.

I began running at the age of 25. I was an old 25 year-old. I was married at 20, earned my degree at 21, and had two boys by the time I was 24. Right after the birth of my second boy, my husband graduated from dental school and we moved to a new city with new people and new surroundings. Shortly after, I lost my mother to cancer and two months later, lost my father in a car accident. It was a dark time. I was sad. Beyond my two boys, I didn’t have much reason or desire to get out of bed in the morning. And many days I didn’t.

After living in darkness for months, I can only assume that I had had enough, because one day after my husband got home from work, I asked him if we could buy a double jogging stroller– it would help me to lose the last bit of baby weight I was hanging onto and it was much cheaper than a gym membership. He was happy to say yes. My husband and I often laugh at the conversation that took place that day… Little did we know where his “yes” would lead.

So I bought a stroller and I began. I got up every morning, put on my running shoes, loaded up the boys and their snacks and toys and I ran. It was ugly in the beginning. I walked often and it was hard. But the sunshine! The sweat! The accomplishment!

Thirty minutes of run/walking turned into thirty minutes of running, which turned into forty minutes of daily running. I kept this up until the intense heat of the Arizona summer set in, and that was when I began to wake up before my family and run early in the morning while the sun rose in the sky. To some it may sound like torture. To me, it was peace. Ten years later, it still is.

After about nine months of running (and an eventual gym membership), I was walking into the gym one Saturday and I saw a sign that read, “Good luck tomorrow to the runners of the Rock ‘n Roll Arizona Marathon!” I remember that moment like it was yesterday. I stopped dead in my tracks. I read it and said to myself, “Next year, I’m going to be one of those runners. I’m going to run a marathon.” I hadn’t run a race of any distance before, but I felt sure.

I trained for a year and I ran the Rock ‘n Roll Arizona marathon. I had never in my life felt more alive than I did that day on the race course. I was such a nerd… I kept thinking to myself, “I’m doing it! I’m really doing it!” And I would look at the runners around me and think, “You’re doing it, too! We’re doing this, guys!” Then I crossed the finish line and got a medal. A medal! I had no clue that I was going to get a medal.

After the race, my Granddad walked with me back to my car and asked me, “So, will you do it again?” I’ll never forget my response, “I HAVE to do that again.”

So, why? It was hard work. It hurt. It was time consuming.

But you see, the girl who got a marathon medal placed around her neck, she was no longer a victim of circumstance like the girl she once was. Things didn’t happen to the girl with the medal, she made things happen. The girl wearing the medal was disciplined, accomplished, fit, determined. She could make the impossible possible. She had found her passion the moment she crossed the finish line, and her mom had once taught her that a woman who has found her passion is an unstoppable force.

It’s been ten years since I started running; eight years since I crossed my first finish line. I’ve completed twenty-two full marathons. I am on my way to completing a marathon on each continent and earning a medal from each of the six World Marathon Majors (NYC, Boston, Chicago, London, Tokyo, and Berlin.)

In the past ten years I have gotten asked countless times why I do it. To be honest, there are a thousand reasons why, but they can all be boiled down to this one response: “I run because the girl with the medal is who I want to be.” 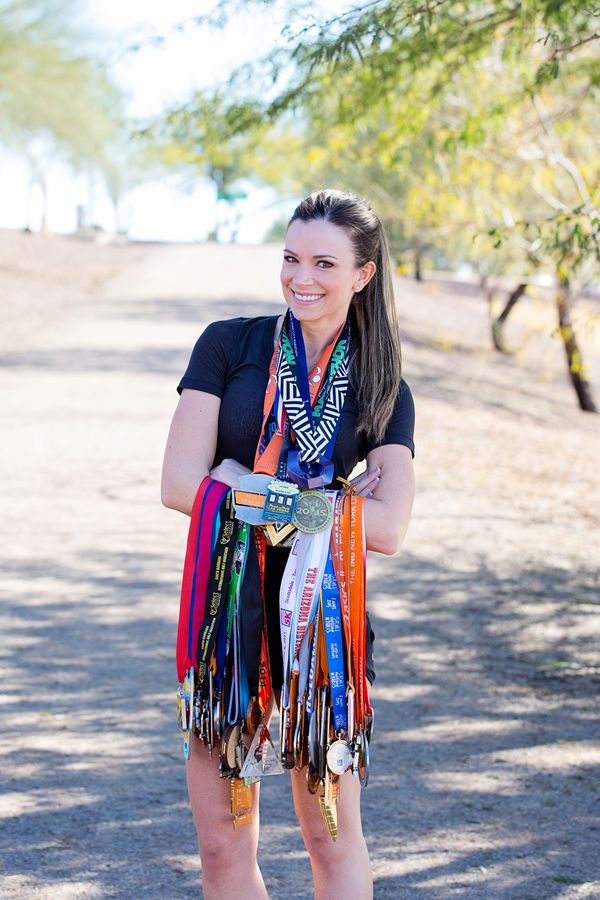