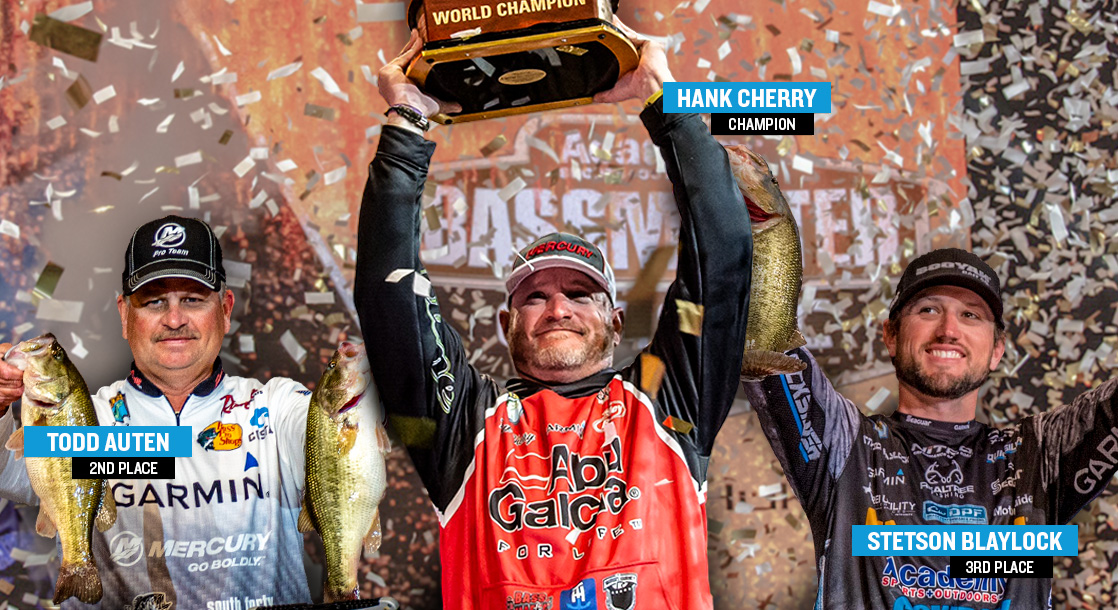 Garmin is the electronics choice of champions.

And they all credited Panoptix LiveScope for their success at the world’s most renowned fishing tournament.

“Thanks to the Garmin ECHOMAP Ultras with the Panoptix up front, I could see really good mapping, so it was easy to see the indentions and the out spots on the causeway,” Cherry said. “With LiveScope, I could actually follow the herds of gizzard shad, and I could tell when I would see a fish if it was going to bite or not. There were several key fish that I caught that I saw coming to get the bait because it’s happening right there in live action.

“If you do not have Garmin LiveScope, you are definitely missing out. It was a huge part of my championship run.”

Cherry maintained a wire-to-wire lead and topped the field with a three-day total of 65 pounds, 5 ounces. Auten finished second with 58-10, followed by Blaylock with 58-1.

Additionally, Lake Guntersville is one of the more than 145 LakeVü g3 Ultra lakes surveyed in the U.S. by Garmin, offering anglers an unprecedented level of detail with up to 1-foot contours, along with high-resolution relief shading for a clearer lake bottom profile.

“We are incredibly proud of all the Garmin anglers who competed at this year’s Bassmaster Classic and would like to extend a huge congratulations to Hank, Todd and Stetson on their top-three finishes at the biggest event in bass fishing,” said Dan Bartel, Garmin vice president of global consumer sales.

“It’s an honor to be a part of their success, and it’s humbling to see what a difference using Garmin products, particularly LiveScope, is making for our anglers on high-profile stages like the Classic. We’re confident there will be many more top finishes for the Garmin team this season and beyond.”

For Auten, it was a combination of LiveScope, the Force trolling motor and the new g3 mapping that helped him secure his second-place finish.

“The Garmin Panoptix LiveScope helped me see the fish moving around in the grass in real time — it’s wild, like a video game,” he said. “Once I found them, I relied on the Force trolling motor with its anchor lock feature to help me stay on point to catch more fish.

“And the new LakeVü g3 Ultra mapping card with Navionics data helped me find some of the detailed key areas that were the key to my success.”

On stage at the final weigh-in, Blaylock added: “One of the keys to my success this week was running the Garmin LiveScope. The cool thing about running LiveScope for me was being able to find those grass edges, and not only that, but to see the bait and actually see the fish hanging out in that grass. I’ll tell you right now, if you don’t have it, you are behind.”

The ECHOMAP Ultra series is preloaded with Garmin’s latest and most detail-rich LakeVü g3 maps that blend together the best of both Garmin and Navionics content to deliver unparalleled coverage, detail and convenience to users.