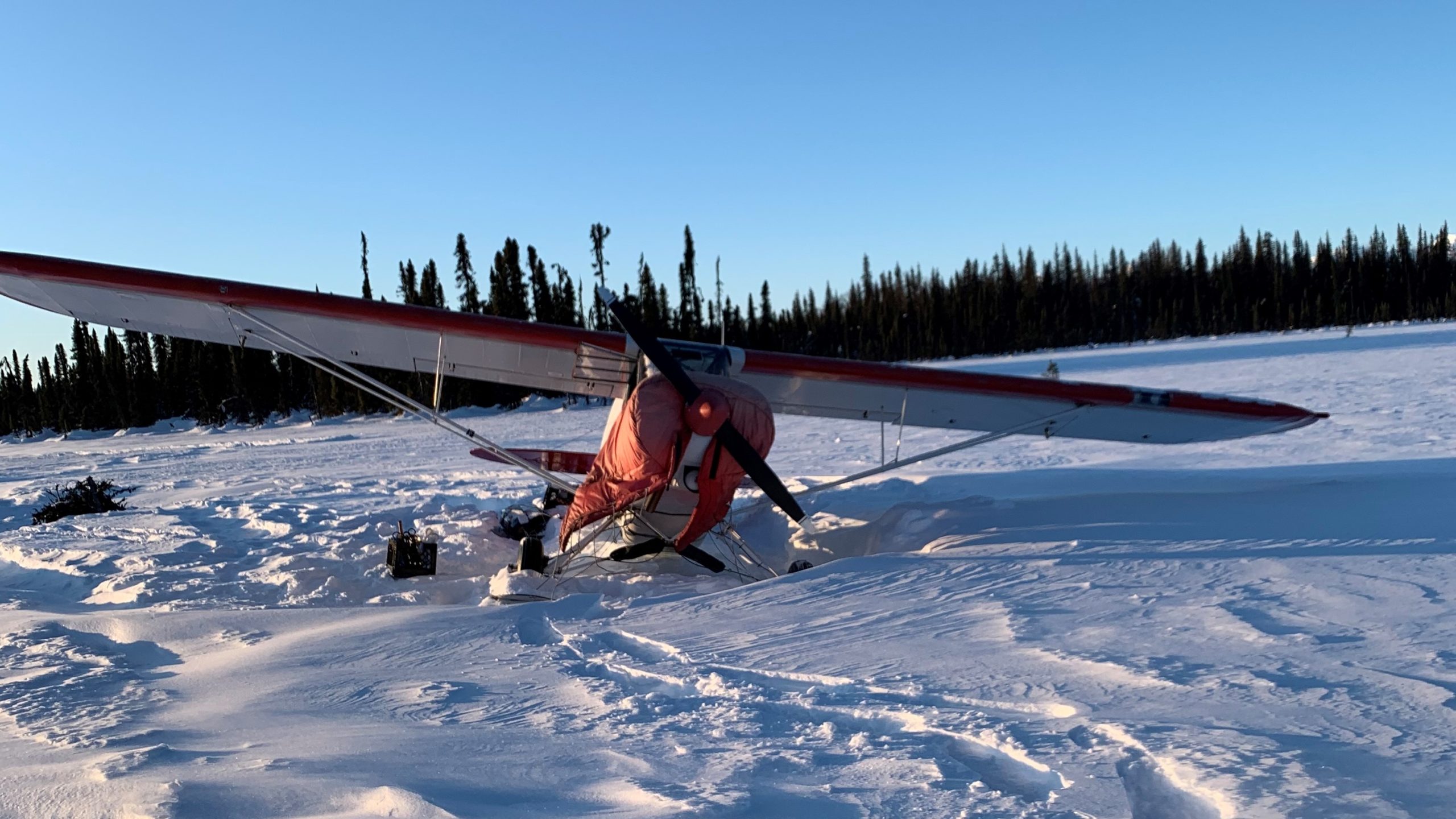 Pilots often buy inReach® devices for the two-way satellite communication or SOS functionality, sometimes with the thought of a worst-case scenario — an in-flight malfunction or a crash — in mind. But in Alaska, anything can happen. And on a cold day in January, that was the case for Chad Lewis.

No stranger to flying, Lewis got his pilot’s license before he even had his driver’s license. His first job was at an airport. And he ultimately moved from the East Coast to settle in Alaska because of his love for flying.

“I’ve just always loved it,” Lewis said. “And of course that romanticism of Alaska bush flying is what drew me here originally.”

Many years later, Lewis uses his Supercub for recreational flying and to get to remote portions of Alaska.

In early January, however, Lewis found himself in a precarious situation.

It was his last intended landing of the day, and Lewis found a spot that looked good to stop. It was a bit of a swampy area, and he knew the snow would be deep. He did several passes to check out the location and made some tracks to pack the snow. But when he finally came to a stop, the tail and one side of the plane sunk down into the snow — nearly down to the wing.

Lewis made several attempts to dig the plane out and get it turned around, but his efforts were futile. And by that point, it was -20 degrees Fahrenheit, the sun was setting, and Lewis knew he wouldn’t be able to pull out of that location in the dark even if he could get the plane unstuck.

Lewis began preparing to spend an unplanned night in a snow cave in a very remote area of Alaska. He had survival gear and a -20 degree sleeping bag, but the air temperature and snowy, swampy landscape made it almost impossible for Lewis to get a significant fire going. He had a stove, too, but it was so cold he couldn’t get it to ignite. That meant he couldn’t make food or boil water to drink.

“It was rough,” he said. “Maybe rougher than it should have been based on how I was prepared.”

Not every portion of Alaska has flight following or other radar coverage, which is partly why Lewis had invested in an inReach satellite communication device in the first place. He wanted his wife back at home to be able to track his flight path via MapShare™.

“If I’m ever late, my wife can easily log in to the site and see where I was last or what’s going on,” he said. “Then we can communicate back and forth, and I can let her know why I’m late or what happened.”

The inReach device’s two-way text communication via the global Iridium® satellite network was key to his initial investment in the technology as well.

“I was looking for a way to actually be able to communicate,” he said. “If you know where somebody is but you can’t communicate so you don’t know what’s going on, that can heighten anxiety for the folks on the other end.”

Lewis was particularly grateful he could communicate with his wife on that early January night. He had the inReach device attached close to his body to keep it warm, and so as soon as he realized he was stuck, he texted his wife on the device to inform her of the situation.

Still awake in the cold of that -35-degree night, Lewis determined that his feet had been numb for about 10 hours and began to worry about doing permanent damage to his extremities.

That worry finally prompted him to trigger an SOS and communicate with staff at the GEOS International Emergency Response Coordination Center.

A search and rescue team via helicopter was dispatched to Lewis.

“They found me immediately because they had my coordinates,” he said. “The biggest challenge they had was finding a good place to land because the snow was so deep.”

Lewis had developed severe frostbite on his hands and feet. His right thumb was black with third-degree frostbite and felt as though it were burning.

“The rescue team actually told me that rather than suffering as long as I had through the night, I should have just triggered the SOS earlier and not risked potential harm,” he said.

Ultimately, though, Lewis recovered – and kept all of his fingers and toes.

“But without the inReach I would have had to spend the night until the morning and then continued trying to get unstuck,” he said. “Or I could have potentially hit the plane’s ELT, but that doesn’t give your exact location, and I don’t know if it would have been working in those temperatures.”

Later, Lewis used the inReach coordinates to guide him back to where his plane was located and retrieved the plane with a helicopter.

Be Calm, Be Prepared

In addition to having all the necessary survival gear to spend the night in negative temperatures, Lewis credits his ability to stay calm for his ultimately successful rescue.

“I was definitely prepared, but the biggest thing was just being calm,” he said. “I was calm about the situation the whole time. Maybe just a little frustrated I was stuck.”

Back at home, his wife was calm, too, because she could text back and forth with Lewis.

“I think it would have been a lot worse – she would have been really concerned – if there was no way to communicate,” Lewis said. “That made all the difference in settling fears and anxiety. Because I was safe. It wasn’t a crash. I just landed and got stuck and couldn’t get out because I was in the middle of nowhere.”

That’s why his advice to other pilots who fly in the backcountry is to carry an inReach.

“At the end of the day, the minor additional cost to be able to communicate with somebody if something happens, and being able to provide details of the situation so that rescue can be prepared, is huge peace of mind,” he said. “I recommend it to everybody.”