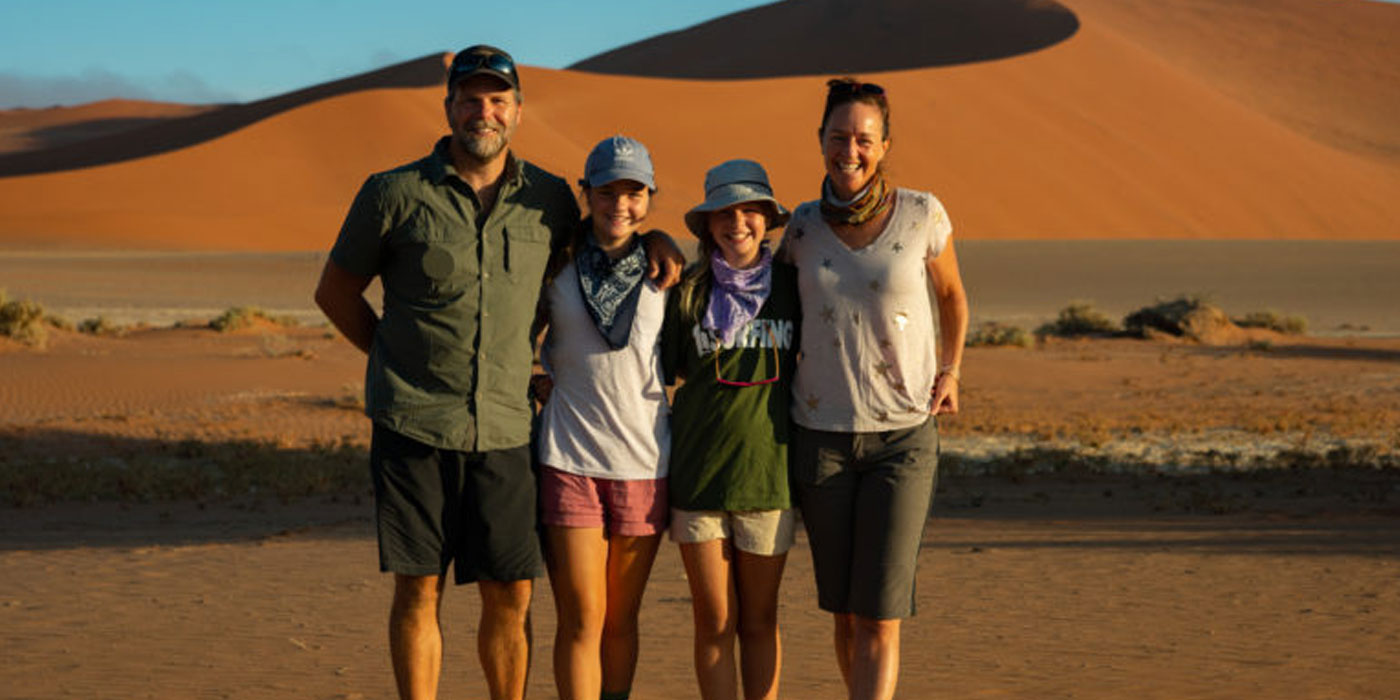 It’s not every day you get to travel the world with your family in tow. But for Michael and Chelsy Gilroy of Maine, it was — for five months. Having worked in the international travel industry for many years, they had long dreamed of taking a big trip with their daughters, ages 11 and 13. A short, family trip to South Africa in 2014 was all the motivation they needed to begin planning a larger globe trot, and in December of 2018 they embarked on a epic journey, spanning from Hawaii to Scotland, with stops in Australia, New Zealand, Singapore, South Africa, Botswana, Namibia, France and Spain in-between.

For many families, even a weekend trip to the local amusement park can be a tiresome task, so it’s hard to believe pulling off a five-month, worldwide trip. Still, with some planning, there are many ways to make long-distance traveling with kids easier, according to Michael and Chelsy.

When it comes to international travel, there’s a lot to consider: shots, visas, informing state departments, booking flights, arranging lodging, passports, birth certificates and more. But consider a five-month period with kids, and there are significantly more layers of planning.

Two years before taking off, Chelsy was already conversing with her daughters’ teachers about the best time of the year to pull them out of school and how to handle home schooling on the road.

Tap Your Network and Have a Purpose

Many families have traveled internationally and come back with lessons to share. The Gilroys sought them out.

“We had two other really good friends who did the same thing with kids of similar ages,” Chelsy said. “They sort of paved the way with the advice they offered.”

In addition to learning from other families near home, the Gilroys reached out to friends living in the countries they planned to visit. These local relationships and visits during their trip helped them learn about local cultures and preserved a sense of safety while traveling.

They also contacted trusted organizations and affinity groups that they had connections with to plan learning opportunities during their trip. “If you don’t have an existing connection, reach out to them in advance and create a relationship,” Chelsy said.

While it can be tough to plan a trip to multiple destinations, having a purpose for each location can make it easier. For example, the Gilroy family shared a passion for animals and the outdoors — two things that largely dictated the travel itinerary.

“I think some people, when they plan trips, think they’re going to educate their kids, so it’s Europe, it’s the history, it’s the culture, and the churches and the old buildings. Those places are remarkable, but we were so drawn to the outside world,” Chelsy said.

Those passions ultimately led to nights sleeping under the stars, afternoons running barefoot down massive sand dunes in the Namibian desert, learning about the preservation of rhinos with Save the Rhino Trust, watching a hippo from mokoros (wooden canoes) in Botswana, traveling along the Garden Route and swimming with penguins in South Africa, hiking, rafting and learning about endangered kiwi birds in New Zealand, and much more.

Unplug and Leave Urgency Behind

“I think the biggest takeaway from this whole trip, by far, really wasn’t so much a cute moment that happened as much as just this ability to suddenly have your life distilled down to a backpack and the people you love the most,” Michael said.

Everyday life is jam-packed with distractions, from devices to work obligations to traffic. While traveling is not necessarily free of those things, traveling the world with your family means paring down to only the necessities and one another’s company.

It wasn’t until three months into the trip that the Gilroys truly felt that they didn’t have to go everywhere and see everything. The glory of a months-long trip is the ability to relax and not feel the sense of urgency that’s often felt on a shorter trip.

“The fact that we had five months really allowed us to enter into this experience without a sense of urgency, which really changed the sort of calculus and how our day unfolded,” Michael said.

The Bag Matters and Less Is More

“A soft bag with wheels,” Michael said, in regard to traveling necessities. “The key is having something really sturdy that can actually roll.”

Plus, he said, when traveling with kids, make sure they can handle their luggage themselves — or else you’ll get caught carrying four bags everywhere.

At a certain point in the trip, the Gilroys only cared to dig so far into their bags. “Top layer living,” they said. They recommend considering the weather where you’re going and to remember that a heavy pack quickly becomes a drag.

“We scaled our packing down as we started traveling more,” Michael said. “For four and a half months of our trip, we were either in the southern hemisphere or some part of Europe during the warmer months, so we really didn’t have to bring those heavy jackets.”

Be Aware of Risk and Don’t Forget Your inReach

Risk is not always apparent in a foreign territory, especially to kids. Chelsy and Michael said it was helpful to have conversations with their daughters about danger and the need for caution in some areas.

In addition, they carried an inReach device for reliable navigation in remote areas and to communicate when necessary. “Having an inReach was particularly comforting while self-driving through Namibia, where we saw no one for hours on end,” Chelsy said. “I like to think of our inReach as our secret James Bond gadget … small and powerful, and very reassuring to family to know that we were alive and well when we were otherwise off the grid.”

The Gilroy’s daughters are avid readers, so they figured out a way to have a few books available for every leg of the journey by dropping off and picking up new books as they went along.

“That was actually a nice way to connect locally in places like bookstores, libraries or literary corners,” Michael said. “And you can learn so much about the culture through those little venues as well.”

Use Social Media as Intended and Chronicle Your Adventures

It can be hard to pull kids away from their friends at a young age. For the Gilroy daughters, traveling the world also meant saying goodbye to friends, teachers, sports teams and other daily comforts. According to Chelsy, social media (used sparingly) was a good way to allow the girls to maintain a sense of connection back home.

Chelsy chronicled their travels on a blog, which allowed friends and family to follow their adventures. She found the blog was the best way to keep curious friends and family in the loop, while also taking time to process and reflect on each leg of the trip. Michael, meanwhile, took photos to add as visuals.

While for many it can be hard to leave work and school for a five-month period, the Gilroys cherish that they can apply what they learned while traveling to their life back home. Michael is the founder of Frontier, a food, arts and cultural gathering spot with a full-service restaurant, bar, theater, café and event venue in Maine. It’s a destination, according to their website, “reminiscent of a traveler’s crossroads … where people gather to explore food, film, music, art and ideas inspired by the world.” The Frontier motto is to “Go Beyond,” which is exactly what the Gilroys were able to do during their epic trip.