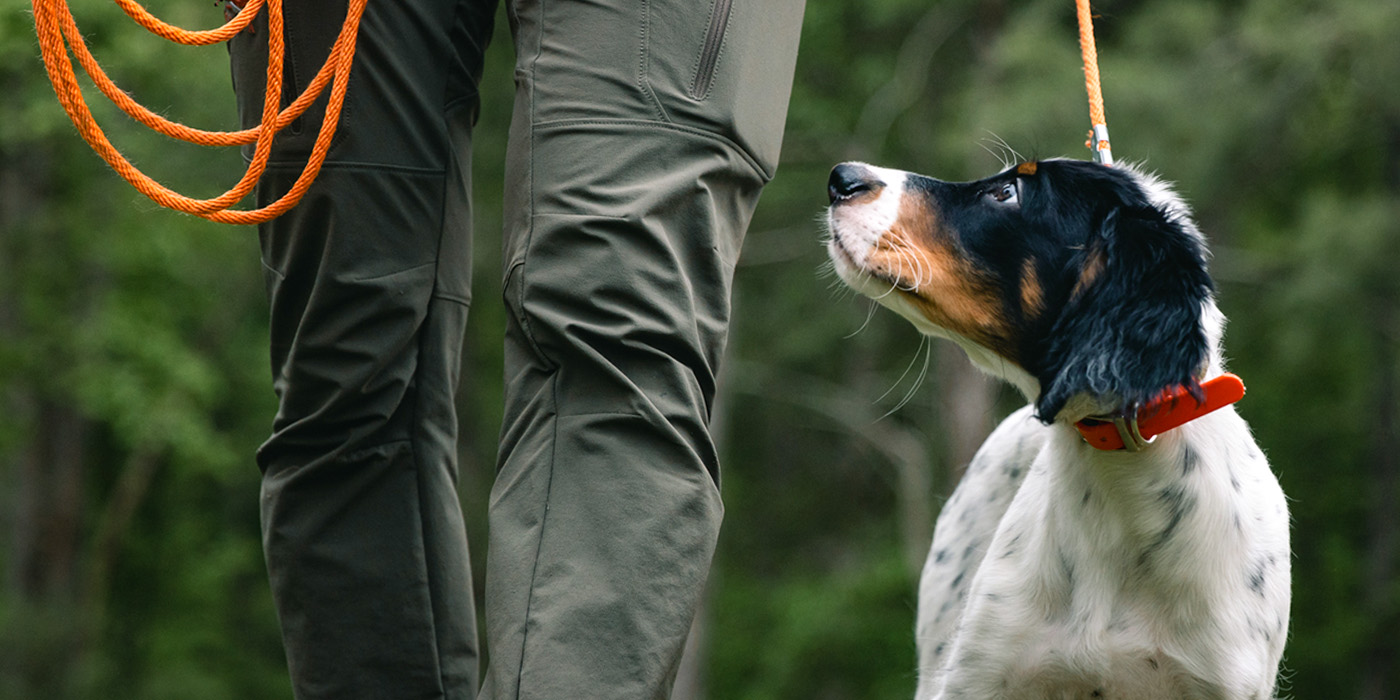 If you’re like me and found yourself welcoming home the newest member of your family during quarantine, it’s certainly a time you won’t soon forget.

Right before everything came to an abrupt halt in April my husband and I scooped up our 8-week-old English Setter puppy Rohan at an airport and darted home, and these first months with Rohan have been critical for building our relationship with him and training him.

Although genetics play the largest role in making a bird dog, it’s our responsibility to encourage and shape Rohan’s natural abilities and instincts, utilizing structured and controlled training sessions, consistency and plenty of bird exposure.

I’m going to share a couple foundational training techniques I’ve borrowed from other trainers and have used while training from home. While all dogs are different, we must be sensitive to how we progress with our training, according to the dog’s individual personality, needs and development.

The following techniques I’ve been using with Rohan can be used throughout all stages of training and can be modified to accommodate different dogs’ needs.

If you keep your pup motivated and clearly communicate what you expect from them, both of you will enjoy training together and learning from each other.

Throughout all our training, there have been two means of communication to prompt behavior: verbal and physical cues.

When introducing a new behavior, I start with only a designated physical cue, like a raised hand when training Rohan to sit. Only once he’s consistently responding to the physical cue will I start incorporating a verbal cue along with the physical cue (saying “sit” and raising my hand).

I make sure to start with the physical cue, not only so I can ensure I’m not repeating my verbal cue more than once, but also because dogs are much more responsive to physical communication.

Another significant perk of having both cues is when you’re in the field. When we’re hunting or training with birds, I want to limit how much I verbally communicate with Rohan, so being able to physically cue him to execute a behavior is helpful.

With all our obedience training, I’ve been incorporating a marker-and-reward system, also known as classical conditioning. Rohan has been incredibly responsive and engaged with this, and I’ve really enjoyed seeing him quickly understand this pinpoint communication method.

For example: As I’ve been working with Rohan on recall, I’ll use our verbal cue for recall (“here” or a whistle sound), and when he comes to me, I’ll mark his correct behavior with a verbal “yes” (you can use whatever sound or word you like).

Then only after you’ve marked the moment that he correctly executed the behavior, you can deliver a reward. I use food as a reward because Rohan is so food driven, but playing with toys or praise can also be the reward.

You can also mark an incorrect behavior with a verbal “no” and the deprivation of a reward. This isn’t a punishment, but a prompt to try again.

After hours of consistency and hundreds of reps, Rohan has developed an involuntary response to our marker “yes,” where he’ll start licking his lips and expecting a reward. Now that we’ve achieved this, I can mark exactly when Rohan performs a correct behavior, and the mark is now conditioned to have the same value as a reward.

This is helpful in successfully communicating with your pup. It’s not only been useful throughout our obedience training, but it will also lead a more educated and confident pup into our future pressure training.

When it comes to training dogs, there’s no shortage of available information, and there are various styles and methods of training. While there are many ways of successfully training a bird dog, you just have to find a way that resonates with you and stick to it.

I’ll be using these foundational techniques throughout all our training, both at home and in the field, ensuring Rohan is a well-mannered family dog at home and a busy dog in the grouse woods.

As I continue to work with him and watch him develop, I have no doubt he’ll teach me as much (if not more) as I’ll teach him. After all, I’m just here to encourage what he has been bred to do.

Most importantly, we’ll enjoy the process and the bond we’ll share through teamwork — whether we’re training or hunting in the fall.