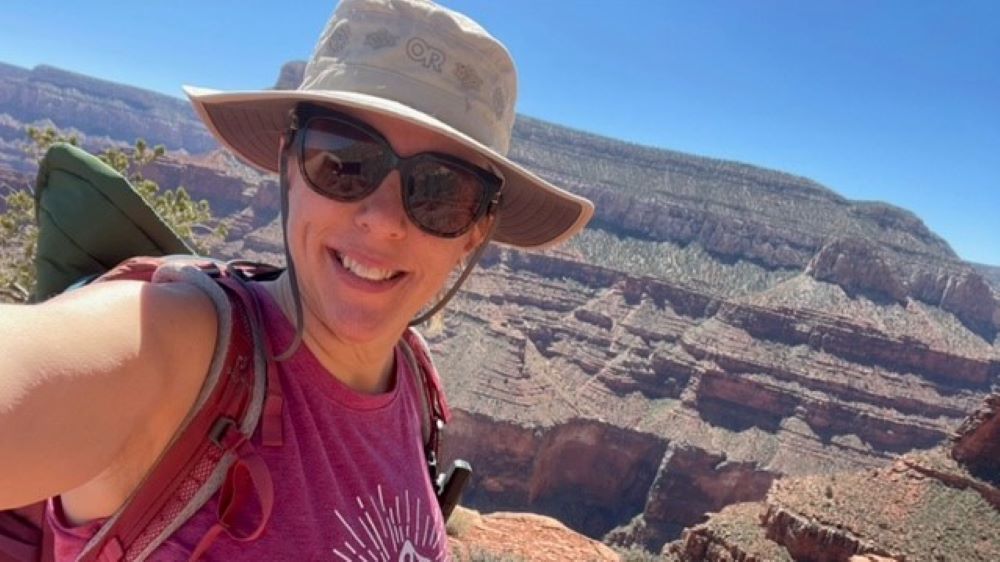 In May and June 2022, a spike in cases of gastrointestinal issues with symptoms consistent with the highly contagious norovirus were reported at Grand Canyon National Park. Subscriber Kristine Key shared with Garmin her story of helping one group of critically ill hikers.

I was hiking solo on Boucher Trail. It’s a brutal trail even before the big dropdown before Yuma Point. At about 4 miles in, I came across a group of four hikers who had been doing the Hermit Boucher loop and were on their last day out.

I noticed immediately that one of them did not look well. I talked to one of them and, come to find out, two of their group members had been violently throwing up the night before and that morning. He asked me how bad the trail was, and I advised him it was a very difficult trail out of the canyon. I told him I had my inReach and, if needed, could hit the SOS button and get a rescue coordinated.

At that time, he declined but said he’d find me if they changed their mind. I continued on my trek, eventually coming upon the two other party members. One was resting under a tree — also not looking so good. I chatted a bit with them as well, once again offering to coordinate a rescue. One said he was just going to rest and wait a bit more. So I decided to hike on to my stopping point and cache the water I was bringing for the next trip.

I spent about an hour at Yuma Point, eating and resting, because even in the morning it was 85 degrees, and the heat was brutal. Then I headed back and came upon the group again. They hadn’t moved and let me know that at this point, one party member hadn’t stopped throwing up, and they were now dangerously low in water (about 1.5 liters left for the group).

I knew it was time to trigger an SOS.

I hit the SOS button on my inReach, and within 30 seconds the Garmin International Emergency Response Coordination Center (IERCC) staff was messaging me, asking for details. With my inReach paired to my phone, I was able to easily text back the details. A minute later, a Grand Canyon ranger was messaging me to get more details. I advised him of the sick hikers, their conditions, names, ages and our location.

They were able to see my location from my inReach as well. They advised it would be 2 to 3 hours before the rescue helicopter could get there and asked that I stay with the hikers. I, of course, said no problem, and we hunkered down for the wait. The individual continued to violently throw up anything he drank, and so we set up a tarp to get him into the shade. He slept on and off as we checked on him throughout the time. His friend and I chatted and otherwise just soaked in views of the beautiful and dangerous canyon around us.

The two other party members were nowhere to be found. One of the sick individuals just wanted to move on, and his friend was trying to get him to stop and wait. We thought about hiking a bit to find them but also thought that it may be too dangerous to try to chase him down. But at about 3 p.m., I received a message from the ranger that a helicopter was on its way and to signal when it flew by.

We heard it coming after packing up and began signaling by waving both arms as they flew by. They couldn’t land near us, so they flew back into the canyon a bit. A few minutes later, two rangers arrived carrying gallons of water. They gave the sick individual a little and offered to fill our water up, too. They then asked the sick individual if he could hike a bit to the helicopter. The other party member and I would do the 3- to 4-hour hike out. But being that it was pretty late, and we might miss the shuttle at the trailhead, the rangers let us know we’d definitely have a ride to our vehicles, even if they had to pick us up.

A woman came up to me from off the helicopter and asked my name. When I told her, she said, “Can I just shake your hand and say thank you for doing this? Thank you for saving this man’s life.” I was taken aback a bit, as I felt there was no other option but to help. I said I only hoped I’d get this help if I ever needed it.

The sick hiker was safely transported to the helicopter, and his friend and I started our hike out. We made it out 3 hours later — exhausted and beat but with smiles the whole time. We found out the other sick hiker had actually made it out himself. Everyone was safe.

The rangers think the hikers were sick with norovirus. Apparently, it was rampant in the area, and several rescues had happened on the same trail that week for the exact same illness.

This was my 13th drop in, first remote solo hike, and the danger of hiking really showed that day. It was a bit surreal to be thanked by random strangers and employees as I walked to the shuttle parking.

My advice: Always carry a satellite communication device. Always have more than enough water. Always be mentally prepared and know what to do in case of an emergency. And always look out for fellow hikers.

In the end, this whole thing could’ve been much worse. I’m thankful I was there, and now I’ve made friends for life and have quite a story to tell.

Plus, this was only my second time out with my inReach!

NOTICE: To access the Iridium® satellite network for live tracking and messaging, including SOS capabilities, an active satellite subscription is required. Some jurisdictions regulate or prohibit the use of satellite communications devices. It is the responsibility of the user to know and follow all applicable laws in the jurisdictions where the device is intended to be used.