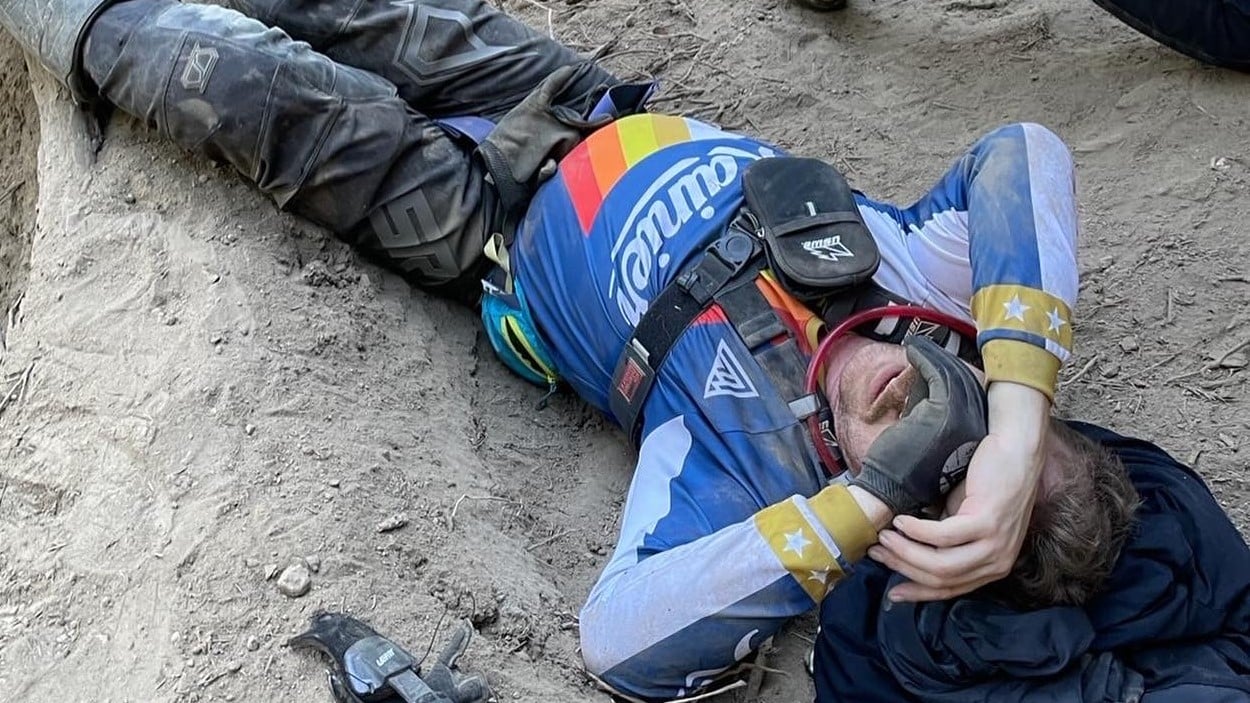 The 10,000th inReach SOS: A Foot in the Wrong Direction

In October 2022, we announced that more than 10,000 individuals had received help after triggering SOS distress signals on their inReach® devices. So what was the actual 10,000th inReach SOS incident?

The injured individual was Kyle McKillop, a 33-year-old inReach subscriber who is no stranger to the outdoors. He regularly camps, mountain bikes, snowboards and dirt bikes in the Pacific Northwest. Originally, he purchased a Garmin inReach satellite communication device to have while on solo trips in the backcountry.

“I figured it would be a good idea to get one after an incident with a mechanical breakdown that caused me to be extremely late getting home,” he said. “It’s been a great way to keep my wife informed if anything happens while I’m gone.”

On that day in fall 2022, though, McKillop was with five other friends. They planned to do a 60- to 70-mile loop ride in an area and on trails they were familiar with.

More than 20 miles into the ride, the group was rounding a sharp, steep and rooted switchback that McKillop had done on previous rides without any issues. To gain momentum, he began accelerating to get to the top of the switchback. It was then that what he calls “the incident” occurred.

As the grade of the hill increased, McKillop lost his balance and started to fall. Not wanting his bike to tumble off the switchback, McKillop attempted to jump off the back of the bike and push it into the hill. He jumped, landed on his feet and spun around to avoid falling down the switchback. The maneuver was successful, and he kept his bike from going over the hill.

But as he twisted, he realized his foot was not twisting with the rest of his body. It was caught in some roots and thus anchored to the ground.

“When I looked down, my foot was pointed completely backward,” he said. “I remained standing but couldn’t believe what I was seeing. It made me sick to my stomach looking at it.”

He released his foot from the roots and hopped on one foot over to a spot on the trail where he could lie down. When he looked at his friends, they were looking back at him — in shock.

“I knew we had several inReach devices among our group members, and I knew it was going to require a helicopter to get me out,” he said. “We were over 10 miles to the nearest forest road, with significant terrain features that prevented anyone from being able to ride me out.”

In a matter of moments, Garmin Response, the 24/7 staffed global emergency response coordination center, let McKillop and the other inReach users know that emergency services were being contacted and dispatched. They informed the group that the rescue team would not have a transport basket and they would need to find a spot for the helicopter to land. Otherwise, it would’ve taken 8 hours for a rescue team to reach the group on foot.

Meanwhile, McKillop was in agony. His friends worked quickly to figure out how to get him to a pickup spot for the helicopter. They created a stretcher with branches and paracord, got him loaded onto it and carried him to a ridgeline.

When the helicopter arrived, the landing area was deemed not flat enough. The EMTs jumped out to check on McKillop while his friends looked for other spots to land. Unfortunately, there wasn’t anything better nearby, so everyone began stacking rocks up on a ridgeline to create a landing area for the helicopter.

“The pilot and the EMTs were flawless, but they said it was one of the sketchier rescues they have ever done,” McKillop said.

After a 45-minute flight and another 45-minute ambulance ride, he made it to the hospital. He had a broken tibia and fibula and a dislocated ankle — an incredibly painful injury to endure. Still, McKillop made it home by nightfall.

McKillop said that having the inReach provided him with comfort through the whole ordeal.

“I would 100% recommend everyone that goes into remote places to have an inReach,” he said. “Knowing that we had a rescue team responding and they had my exact GPS location ultimately helped me stay calm.”

NOTICE: To access the Iridium satellite network for live tracking and messaging, including SOS capabilities, an active satellite subscription is required. Some jurisdictions regulate or prohibit the use of satellite communication devices. It is the responsibility of the user to know and follow all applicable laws in the jurisdictions where the device is intended to be used.