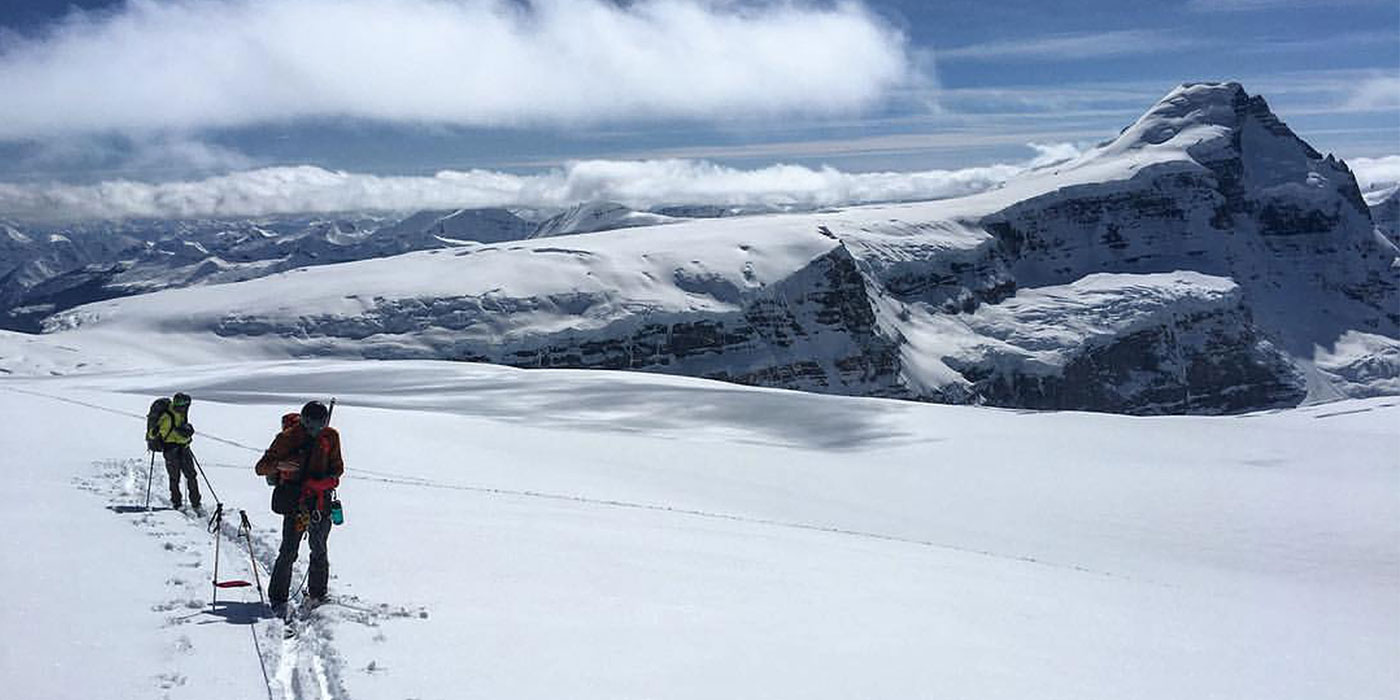 Stuck in a Blizzard on a Glacier

In May 2017, Canadian Jamie Junker set out with two friends – an Australian and another Canadian – to summit North Twin, Twins Tower, and South Twin in Alberta, Canada. The three experienced climbers and athletes were diligent in their meticulous preparations, but just one day into their adventure, they woke to dangerous conditions none of them expected.

To summit the three peaks, Junker and his friends planned to ski about 15 kilometers up the Athabasca Glacier in the Columbia Icefield, ascend North Twin – the third highest mountain in the Canadian Rockies – then ascend Twins Tower and finally traverse to South Twin. Crossing the Icefield is hazardous due to the prevalence of crevasses on the glacier, and conditions are optimal for such an adventure only during a short period of the year. After checking weather reports and determining that they would have perfect conditions for their attempt, they set out under clear skies. It would not remain clear for long.

Going to Sleep in Perfect Conditions and Waking to a Blizzard

It took nearly 12 hours before the group reached the base of the mountain and set up camp. They built a snow cave, got their sleeping bags into bivy sacks, and set up a tarp overhead, which they deemed sufficient due to the forecast and the clear sky above. Around 3 a.m., a blizzard struck with ferocious wind and 6 inches of snow accumulation every 30 minutes. It didn’t take long for the roof of their shelter to collapse on top of them. They tried to rectify their situation as best as they could, given the blizzard conditions. They chose to wait until sunlight to assess their options for moving.

At daylight, snow covered and wet, staying warm was no longer possible, and one of their group – the Australian – was showing signs of hypothermia. The snow was not letting up, and Junker was worried that he and his other friend wouldn’t be able to assist the Australian whose condition was getting worse. Junker decided to trigger an SOS on his inReach® satellite communicator around 6 a.m., and the GEOS International Emergency Response Coordination Center put Junker in touch with search and rescue staff at Parks Canada.

Communicating with Search and Rescue

“It got really scary there,” Junker said, “but it was awesome to have the inReach to text back and forth with rescue.” A helicopter was dispatched, but conditions were so bad that a rescue attempt was impossible. A couple of hours later, the search and rescue team messaged Junker to inform the group that a rescue would be attempted by snowmobile.

While waiting for the snowmobiles to arrive, Junker sent a message to the rescue team that his friend’s condition had worsened. Hypothermia had made the Australian climber nearly unresponsive. About 30 minutes later, the search and rescue team reported that their snowmobiles couldn’t make it. The rescue team coordinator sent a message to Junker, “Do you have skis and boots?” If they didn’t want to wait until conditions improved, Junker and his friends would need to ski out on their own.

Retracing their 15-kilometer route from the previous day in whiteout conditions would be nearly impossible. “It was super intense.” Junker said. “Our tracks had been covered from the day before. There were crevasses everywhere, and you have to move at a certain speed to keep warm and fight off the hypothermia. It was quite an experience.”

The rescue crew followed the skiers via track points sent from the inReach and kept in touch with the three through periodic texts. When they reached their parking lot starting point, the Parks Canada staff happily greeted them, astonished that the three had successfully skied through the blizzard conditions.

The long ski across the glacier seemed to improve the Australian’s hypothermia. The Parks Canada crew determined that the three didn’t need medical assistance, and despite terrible wind and sun burns on their faces, Junker and his friends made the 2-hour drive home.

Getting Back Out There

Junker is an experienced alpine runner and climber (read about his summits and runs on his website), and after the blizzard incident, he knew that he should ease back into climbing after a short recovery. Mentally, he wanted to get back out there. The timing for another attempt at the Twins had closed, but he plans to try again in 2019.

In a previous emergency incident in 2016, Junker fell off a ridge and dislocated his shoulder when grabbing a tree to catch himself after a 20-meter fall. (Junker details the incident on his website.) He didn’t have an inReach that day, but the incident taught him to never travel without it.

Junker was glad to be able to communicate and stay connected when crossing the treacherous Icefield during the blizzard. “Once you carry a device like the [inReach] you’ll wonder why and how you did without it before.”