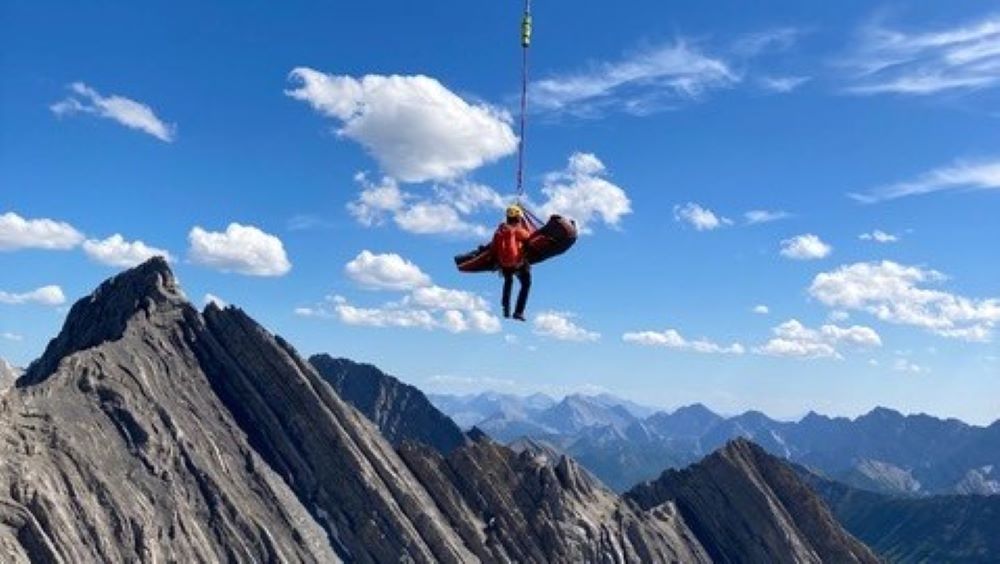 On Aug. 5, 2020, Vi Pickering fell and sustained life-threatening injuries while descending Mt. Rae in Kananaskis, Alberta. Below, she tells her story.

I had a few days off in August 2020 and had connected with a friend to get out to do some peaks during the week. My friend suggested we go up Mt. Rae. Although she had done the peak many years prior, she suggested we do this peak since I had not done it. She also invited two other friends of ours. The four of us had been regular scrambling partners about 4 years back, so I was happy to be reunited for a type of homecoming.

The four of us are seasoned scramblers and peak baggers — some hardcore older ladies who like a bit of mountain adventure. We had all researched the Mt. Rae route and read that there was still snow at the call, but there was exposed rock, so we could work our way up the mountain and go around the snow.

That day, we started up the easy Ptarmigan Cirque on the way to the peak by about 9 a.m. It was easy hiking, and we were enjoying catching up with each other.

We headed up to the snowy call and found the rock portion slippery — with pebbled rock on slab (like ball bearings) and loose scree — but we finally made it. There were two options to the peak from there: one was to follow the ridge up a chimney climb into low grade 5 with both hands or follow a scree hiking path to the right that would bring us easily to the peak.

We all discussed the options and said we wanted something fun and challenging, so we chose the ridge. When we came to the chimney, it looked daunting and much harder than a low 5. I saw a rock at the top that looked like the picture in the directions, so we all still felt comfortable with the route. After committing, though, we realized part way up that this was no proper chimney. At that point there was no turning back. We made it and then had to scout around the ridge to make sure we weren’t cliffed out.

Thankfully, there was a route through the rock band to the peak. We made our way very cautiously. There was lots of loose scree and some exposure with sheer drop-offs.

I called my husband from the top to say we made it and that we were having lunch. I had plans to get back home to pack up the next day and head out to the Columbia icefields for a birthday scramble with another friend.

We took a more direct route down, picking our way down the ridge and then the scree. We took it slow over some slabs and ball bearings, at times even doing some interesting down climbing.

We made it to the call, and once down the final slope, we joined the easy Ptarmigan Trail. At that point, I felt we were home free and that we had done all the hard, scary parts. I even thought that maybe I could take my helmet off, but I realized we still had snow and scree ahead and I should keep it on.

We started to pick our way down. We encountered ice in areas while we were attempting to get on the snow, so we stayed on the rock. One friend, having had bad experiences with others she had witnessed sliding uncontrollably on snow, said she was not going near the snow.

One friend and I came to a point where the rock rib we were on ended, and we would have to go up and around to stay on the rock. I looked at the snow and — thinking it would have warmed enough during the day that it would make it so much easier to go down snow than the loose ball bearing and slab we had endured on the way up — I gingerly took a step onto the snow. It seemed a bit icy, but I thought if I just took a couple more steps I would get on the good snow. I took another step and quickly realized it was far too icy.

At that very moment, my feet went out from under me, and I began sliding on the snow. I had my ice axe in my hand and tried to self-arrest but couldn’t slow myself down. I just kept sliding. I knew I needed to get my full body weight on the ice axe, but an old shoulder injury caused weakness in my arm and with that, weaker strength in forcing the ice axe into the snow.

I was just concluding that I had to put my whole body into the arrest when my ice axe hit a rock and flew out of my hands. With nothing to stop me, I began tumbling on rock and doing somersaults, one after another.

Eventually, I came to a stop in a sitting position halfway down the 45-degree slope. I had fallen about 60 to 80 meters, and the slope continued for about another 200 to 300 meters. One friend later asked what made me stop because the slope kept going, and — truly — I don’t know. There was nothing to stop me.

I could feel my legs and arms, and nothing seemed broken, but I was badly cut and beaten up. I took my helmet off and slipped my backpack off to get my inReach® satellite communicator device. I pushed the inReach SOS button.

I thought for a moment that maybe I shouldn’t push the button and I should just get up and walk out, but I was bleeding from my legs, arms, hands, face and head so thought I really was not able to get up. I did a very small stretch to sit up, and as I did that, I felt a sharp pain in my neck and a sense that if I moved my head just slightly back, my neck felt like jelly.

One friend came down to me, and I gave her my phone so she could use the Earthmate® app to quickly respond to the emergency messages. I told her to also message my husband and my son since they were already listed as contacts on the Earthmate app. She did so.

The fall happened at about 2:40 p.m. The helicopter came and circled us about an hour later. The helicopter returned with a longline, two rescuers and a bag. They were dropped near me, and they started with masks for all and then opened the bag they were going to place me in. They placed a neck brace around my neck.

My friends helped the mountain rescue staff to keep rocks from falling into the bag they were setting up. They were trying to build a sort of platform on the steep slope to give it some stability.

They put a heart monitor on my finger and then began trying to move me into the bag. They said they would have to lay me down. One rescuer suggested I lay on my side with my pack under my head. The transition to laying me on the side while they held my head was successful.

Once on my side, I was wrapped up, cables were tied around me, one rescuer attached himself to the rope, and the helicopter took us off the mountain.

I was placed right beside the ambulance. They lifted me into the ambulance and said they had Shock Trauma Air Rescue Service (STARS) on standby. In the end, because I was stable, I was driven for the next 1.5 hours to Foothills Hospital in Calgary. I arrived at about 6 p.m.

I was given an MRI in short order, and the doctor came beside my gurney and said, “No wonder your neck felt like jelly. You broke it.” My injuries were a broken neck at C2, a crack at L2, lacerations and a broken finger.

I was released from the hospital 2 days after the accident, on my birthday. I was in the halo for 11 weeks and then moved to a neck brace.

Three months later, I finally began going through the next steps in the mental healing process. I went to the Kananaskis Rescue Centre and provided a thank you card for the dispatch, paramedics, RCMP, conservation officers and mountain rescue team. I outlined in the card what happened to me and that without their quick response and having access to a helicopter, I most certainly would not have survived.

The rescue team got to me in just over an hour, and I really don’t think I would have remained conscious for much longer, given I was starting to go into shock. If I had been unconscious, who knows how they would have moved me and what the outcome would have been, as I understand that a C2 spinal injury can affect your breathing. Overall, I feel very fortunate to be alive.