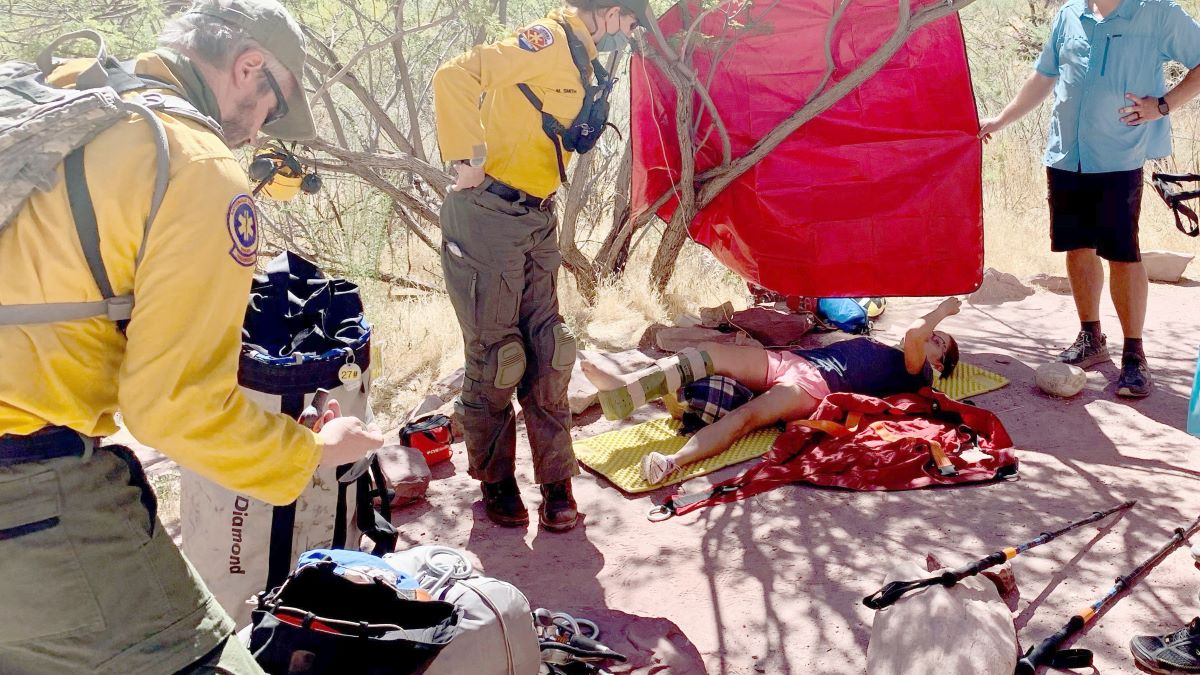 Group Helps Save Woman Bit by Rattlesnake on Hiking Trip

A relaxing soak in a river on a hot day turned into an emergency when Scott Crabtree’s party member was unknowingly bit by a Mojave Green rattlesnake. The inReach® subscriber shared his story with Garmin.

There were 10 of us on a 7-day trip in the Grand Canyon — doing the Thunder River Deer Creek Loop. On day 1, we camped on Esplanade. On day 2, we hiked 6 miles down to Thunder River. It was 11 a.m. when we arrived, and it was extremely hot. We were a big group, so we were spread out in the different pools by the waterfall there. We were scheduled to camp at Upper Tapeats that night, so we wanted to wait out the heat in the water and hike in the late afternoon.

While we were relaxing by the river, one of our group members thought she had slipped and cut herself. She noticed her leg was bleeding, cleaned it up and applied a cream antibiotic and a bandage. But then it started swelling quite badly. Fortunately, there was a doctor in our party, and he noticed a puncture wound. The conclusion was that perhaps she was having an allergic reaction, and so we treated that accordingly and further dressed the wound. Then we unloaded her pack and hiked to Upper Tapeats to camp for the night.

When we woke up the next day, her leg was completely swollen and discolored. We were carrying a Garmin inReach, and it was then that we decided this was an emergency situation and we needed to trigger an SOS. We started communicating with the Garmin International Emergency Response Coordination Center and the National Park Service Grand Canyon rescue team. The rescue team mobilized and showed up around 11 a.m.

They landed a helicopter a mile from the trail, and a member of the rescue team and a paramedic hiked up to us. After talking with our doctor and assessing the injury, they concluded that it was likely a Mojave Green rattler snakebite and our group member needed to be evacuated immediately. No one had heard or seen the snake — as the waterfall was loud, and the snake was likely hidden in vegetation. Crazy!

They did a short-haul helicopter rescue at around 2 p.m., which involved hooking a member of the rescue team and our group member to a 100’ cable and flying them a mile down the canyon where they could land. Then they brought her inside and flew her to the South Rim Village, where an ambulance was waiting to take her to a hospital. We were using the inReach to get updates on her status and keep her mother informed.

Unfortunately, she was allergic to the anti-venom and had a severe reaction, which caused them to medevac her to Phoenix. There, they had a different version, which she was able to tolerate. Our group member was so calm, strong and brave during the event. Ultimately, it was a massive relief to find out she was going to be OK. Afterward, she began improving but still needed a fair amount of physical therapy.

Suffice it to say, the inReach device helped to save her leg and maybe her life. Amazing! The inReach satellite communicator is a great insurance policy and worked really well. I suggest anyone doing backcountry hikes should carry one just in case.

NOTICE: To access the Iridium® satellite network for live tracking and messaging, including SOS capabilities, an active satellite subscription is required. Some jurisdictions regulate or prohibit the use of satellite communication devices. It is the responsibility of the user to know and follow all applicable laws in the jurisdictions where the device is intended to be used.