Chasing Borders by Motorcycle with inReach

In 2016, friends Christian Mørck Røde and Peter Saxhaug Solnør set out with a friend to ride motorcycles from Alaska to the tip of South America. During that trip, Christian was seriously injured in a head-on collision with a truck in Peru. He didn’t have an inReach® satellite communicator with him during that trip, and he was unable to communicate the need for assistance effectively while he was injured and in pain on the side of a road.

Christian flew home to Oslo, Norway, and after 5 surgeries and 3 months recovering on crutches, he was ready for another epic adventure with Peter. Starting in Cape Agulhas, South Africa — the southern tip of the African continent — they aspired to ride across Africa to Nordkapp, Norway. This time, they carried an inReach device. “Having the inReach felt like a huge personal safety upgrade,” Christian said. “It’s a device we can trust.”

During their long journey, inReach proved to be an essential tool that enabled them to stay connected in remote areas and for others to follow their journey. It also proved to be useful for helping others in need during an emergency. 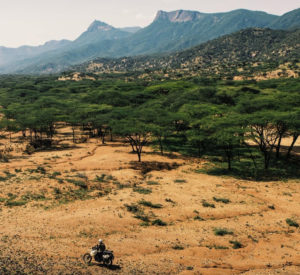 On the 426th day of their trip, Peter and Christian were passed by a sedan on a remote corrugated road in a nature reserve in Namibia (a country in southwest Africa). A short while later, they found the car upside down on the road. The driver and passenger — 23-year-old tourists from Germany and Brazil — weren’t injured, but they were concerned about how to get help and assistance with their damaged rental car while in an area without cellphone coverage.

Christian offered the use of his inReach device. Christian triggered an SOS and made contact with the GEOS International Emergency Response Center (IERCC). “They responded instantly,” Christian said.

The staff at the IERCC understood that limited roadside assistance services were available at their location and contacted the emergency service number of the rental car agency. “A few hours later, a tow truck was on its way from Windhoek!” Christian said. Due to their remote location, it took more than 10 hours for a tow truck to arrive.

It was getting dark, so they all decided to stay and camp for the night. The staff at GEOS checked in frequently to see how they were doing and provided updates on the estimated time of arrival for the tow truck.

“We used the reverse light on the car to light up the area and fired up the stoves to cook a big dish of pasta with our new friends. We blasted music from the car stereo until the battery died while sharing wine and stories and watching the moon rise over the hill before we fell asleep under the stars. It was seriously the best display of stars we had ever seen.”

After the tourists’ vehicle situation was resolved, they decided to travel with Peter and Christian through Namibia for the next 2 weeks. After leaving the deserts of Namibia, Christian and Peter visited the beaches of Mozambique, the jungle in the Democratic Republic of the Congo and Kenya’s savanna.

Christian and Peter originally planned to ride to Uganda, cross the Democratic Republic of the Congo to the west coast and then follow the coast up to Morocco. However, the security situation in the DRC had become worse, so they decided to instead ride north toward Egypt. When they reached Ethiopia, they discovered that they lacked some necessary documents to ride their bikes through Sudan and Egypt, so they shipped their motorcycles to Turkey and then continued to Norway. They reached Nordkapp in August 2018, 11 months after their journey began in South Africa. Counting their travels in the Americas, Christian and Peter rode for about 2 years through 4 continents.

Through Christian’s MapShare™ page, they stayed in touch with friends and families during their travels. “They tracked our progress, and if we were out of cell coverage for several days, they would normally send a text to the inReach to hear how we’re doing,” Christian said. They also stored useful contacts on their inReach device, including contact information for mechanics who could help them troubleshoot problems with their bikes when they were in remote areas far from assistance.

“We really enjoyed Africa and made memories for life every single day,” Christian said. “Traveling by motorcycles must be one of the better ways of seeing this wild continent.”

Christian and Peter were back to working full-time within a week of returning home, but they’re both starting to feel a bit restless and miss the excitement of having a new experience on the road every day — such as the encounter on the remote road in Namibia where they offered help to newly found friends.

“That night turned out to be one of the most memorable for us,” Christian said. “The guys we encountered are forever grateful.”