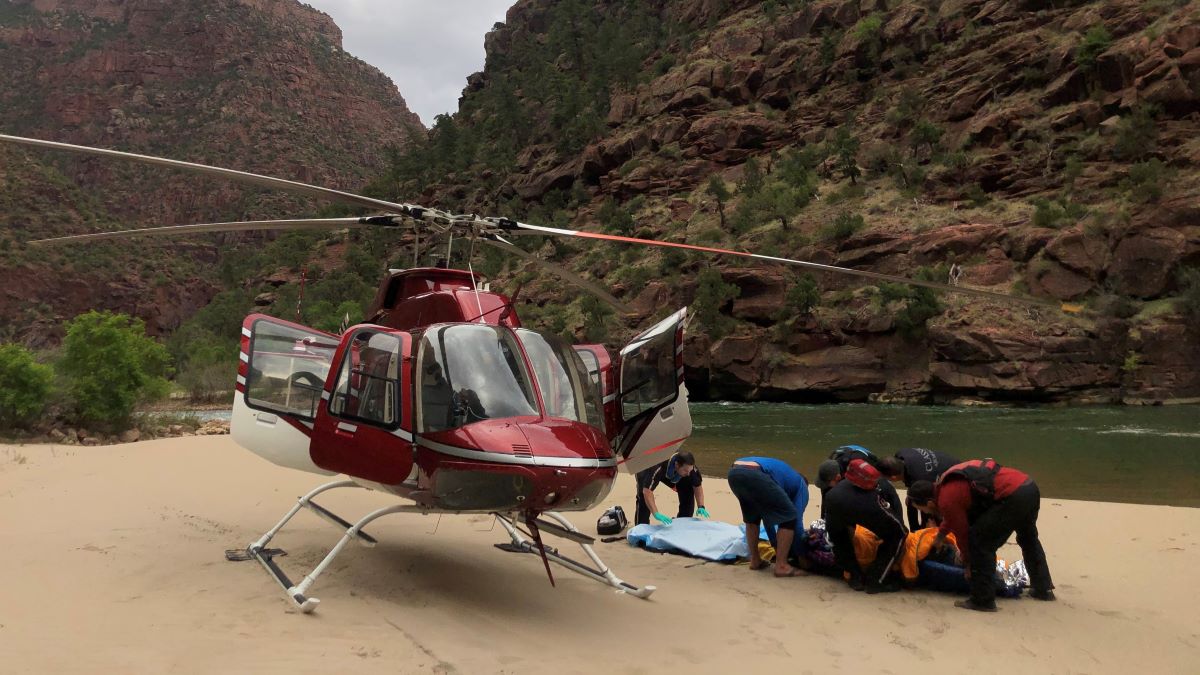 Every day before setting out on the water, Mikaelyn Law lays out river maps and walks her group of whitewater rafters through the plan for the day, does an equipment check and reviews safety protocols. Whitewater rafting is inherently dangerous, and Law — an emergency medicine nurse and expert whitewater rafting guide — is all about mitigating risk.

In June 2020, on the second day of a 5-day private rafting trip with family and friends down the Green River in Colorado’s Dinosaur National Monument, the plan was to raft 5 miles through three of the bigger rapids they’d encounter throughout the trip. That included one Class 4 rapid — aptly named Hell’s Half Mile.

That day, they did their usual scouting of the rapid. They pulled all the boats to the side of the river, walked downstream and planned how to run through the rapid and avoid any potential hazards.

Law — the first to go through — made it and then hung back to make sure the rest of the group got through safely. Three boats made it through cleanly.

As the fourth boat made its way through the rapid, it got hung up on a boulder the size of a small car — hitting it sideways and getting stuck between the strong current and the boulder. The force of the hit and the strong current pushed the boat first up on its side and then all the way over, dumping the two people in the boat into the top of the rapid.

“There’s this momentary wait because they were at the top of the rapid,” Law said. “We wanted to see those two people come up out of the water. We wanted to make sure they weren’t trapped underneath the boat.”

Moments later, though, both people could be seen swimming and trying to make their way down the rapid safely — without hitting rocks and other obstacles. One person managed to make it to a rock and get picked up, and Law took off rafting to pull the other swimmer out of the water and into her boat.

Law changed her party member into dry clothes and performed a quick triage to assess for obvious life-threatening injuries, then sent her downstream in another boat while Law helped orchestrate the overturned boat’s recovery.

Downriver, Law’s brother — an EMT — began a physical assessment and measuring their party member’s vital signs. He radioed to Law that he was concerned about a pelvic fracture and possible internal bleeding. The woman wasn’t able to walk at all.

The next takeout point on the river with access to a road was 9 miles away — not to mention traveling out of the park and several hours to the hospital. It was 4:30 in the afternoon, so their window for a helicopter evacuation was quickly closing. Given their location inside a canyon with walls extending up over 2500’ in some parts of the river, they had no cellphone service.

Law had just bought her inReach satellite communication device months prior for river trips, backcountry hiking and mountain biking adventures. Before that, she had carried only a Personal Locator Beacon and radios.

“We’d heard from friends about the inReach device’s two-way communication, and that seemed like a much better way to communicate,” she said. “Even up until the rescue, we had used the device a lot for communication with people when we were out of cellphone service.”

The day of the rafting accident, however, Law needed the device for something else. Given the risk of internal bleeding, the group quickly decided that it was an emergency situation.

Law triggered an SOS and relayed all the details of the situation to staff at the GEOS International Emergency Response Coordination Center while the group made their way toward a large sandy beach where a helicopter could land.

“We were communicating with GEOS the whole time, updating them about her condition and making plans for the helicopter,” Law said. “The whole process was really fast — about an hour from the time we triggered an SOS to the time the helicopter came.”

The injured rafter was flown to a hospital, where she was ultimately treated and released for non-life-threatening injuries.

As a result, Law’s biggest piece of advice to other inReach users is to not be afraid to use the device. While her particular group included several medical professionals, they still decided it was better to be safe than sorry with their group member’s possible injuries.

“People should know that they can use the SOS and talk through the scenario with GEOS and the dispatched emergency services — especially if someone’s hurt and you’re uncertain about what to do next,” she said. “I would always say to err on the side of caution.”