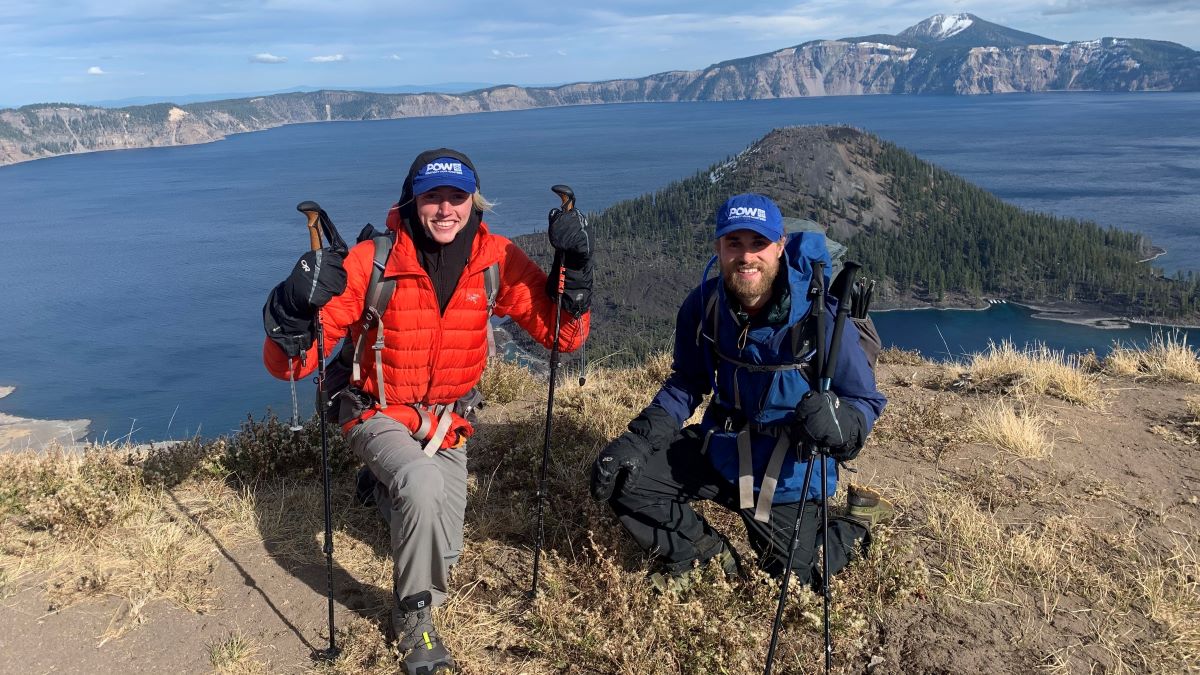 Sammy Potter of Maine and Jackson Parell of Florida, both 21 years old, set out in January with a dream of completing a massive feat: hike the Pacific Crest Trail, the Appalachian Trail and the Continental Divide Trail — in one year. On Oct. 22, after trekking nearly 8,000 miles, they officially became the youngest hikers to complete the Calendar Year Triple Crown (CYTC). It wasn’t easy by any means. They shared with Garmin how they did it.

I’m stopping here. I click a few buttons on my inReach® to let my parents know I’m safe. More slowly, with my near-frozen hands almost as useless as they would be inside my GORE-TEX mittens, I add: “Tough day. Very wet. Many rivew crossimgs.” I meant “river crossings,” but when your hands are as cold as the iceberg that sunk the Titanic, and almost as white due to their near frostbitten state, sometimes you make a spelling error. I begrudgingly get up, help Jackson set up the tent and crawl inside, drifting from this nighttime hell into a REM state hopefully filled with midsummer beaches or a comforting void of nothingness.

Let’s back up a bit. In January of 2020, I was having a tough time. Just weeks after returning to college after holiday break, I got a phone call in the middle of class: One of my friends had passed away. Denial, anger, confusion, depression — I felt it all. Then the pandemic took hold and I left campus, not sure what to do or where to go. I felt hopeless, and worse, helpless. Until I got an idea: to hike the Appalachian Trail (AT). Then a bigger one: hike the AT, the Pacific Crest Trail (PCT) and the Continental Divide Trail (CDT), all in one epic year. It’s called the Calendar Year Triple Crown (CYTC). A few months later, with my college buddy Jackson now on board, plans began to really take shape. We’d hike the entire AT northbound (Springer Mountain, Georgia, to Mount Katahdin, Maine), CDT northbound (Mexico/New Mexico border to Montana/Canada border) and PCT southbound (Washington/Canada border to Mexico/California border).

Or so we thought.

That’s not exactly how things went. The resulting journey was the closest thing I’ll ever experience to Homer’s Odyssey, filled with challenges, delights and many surprises. For now, let’s focus on one aspect of the journey specifically: the route. In other words, how did we hike each of these three trails within a year? When did we hike each one?

Hiking a CYTC is really one long puzzle. It has been since it was first hiked in 2001 by Brian Robinson, who flipped between trails to hike difficult sections in safe weather conditions. It can be done by hiking each of the trails continuously, as was done by Matt “Squeaky” Hazley in 2005, which led us to believe we could do so too. Simple enough, right?

Fast forward to Feb. 21. We were in central Virginia, about 500 miles into the AT. After a 30-mile day, we woke up to see flurries in the air and 2’ snow drifts on the ground. “Uh oh,” I thought. We had dealt with snow all through the Smokies, but every time prior to this, we were able to tell ourselves, “This is temporary. We’re heading toward lower elevations, so the snow is going to get better.” Not this time. This snow was here to stay; it would only increase over the next few months and 14 miles was all we had to show for ourselves at the end of that day. Needing to average at least 20 miles to stay within the possibility of finishing the Triple Crown, this wasn’t going to cut it. And we were exhausted.

“OK, after minor internal crises, back to the drawing board,” we thought. In just a few days, Jackson and I had a new plan: We’d stick it out on the AT for a short while longer (up to central Pennsylvania), hike the desert sections of both the CDT and PCT (500 miles and 700 miles, respectively), hike the rest of the AT, then hike the remaining northern sections of the PCT and CDT. Sound confusing? It kind of is, but essentially, we elected at this point to split each of the trails in two.

The southern deserts of the CDT and PCT proved little match for our hardened trail legs used to the crags, boulders and snow drifts on the East Coast. We actually relaxed a bit and went from that type of fun that’s only felt in retrospect to genuine in-the-moment fun, basking in the rays and reveling in the simple joy of just being warm. Imagine that? We faced a few difficulties, but for the time being, it seemed as though our plan just might work.

July 5: Shasta-Trinity Wilderness, Northern California (PCT). We’re crushing it. Just 9 days away from taking our longest break of the year (4 days) for Jackson’s brother’s wedding and not even feeling that fatigued. We’d finished the AT, 500 miles of the CDT and 1,600 miles of the PCT at this point. With the above average snow levels in the Northern Cascades (Washington) this year, we elected to make one additional change: leave the last 800 miles of the PCT (Washington to Central Oregon) for the end, hike the whole rest of the CDT and finish in Oregon/Washington.

The days in NorCal were hot — 100° F or more daily — and the air was dry. Some forest fires had caused concern, but the record-setting burns of this summer wouldn’t set in for another month or so. Jackson and I, having different rhythms and paces, became accustomed to hiking separately most of the day and meeting up at sunset. On this day, I was about a mile or so ahead as we crossed Highway 3 over Scott Mountain Summit. With a sustained uphill ahead, I put on some music, zoned out a bit and tried to “embrace the suck.” As I climbed, the air thickened with clumps of smoke. “Weird,” I thought. “Maybe we’re closer to one of the fires than we had thought?” Another mile and the smoke got thicker. Now I’m coughing. At that very moment, my inReach pinged five times in a row. It was Jackson, messaging from his own device. “COME BACK. SHERIFF CLOSED TRAIL.” If there was any doubt of whether I should turn around, it was now gone. Before sprinting back down the trail, I climbed 10’ to 15’ to the ridge and looked down to see a patch of flames below. I booked it down the trailhead, probably my fastest miles ever. We hitched a ride to a nearby town and reassessed the situation.

The timing was simply unlucky: We reached this section of trail within hours of a fire starting nearby. But it could’ve been far worse. If we didn’t have an inReach, and if Jackson hadn’t been so on-the-ball, a few more minutes of indecisiveness could’ve meant passing out … or worse. With that section now closed, we had to skip around 40 miles of trail from Highway 3 to Etna Summit. Of course we’d have to come back and hike it later — yet another layer of complexity now added to our attempt.

Back on the CDT, we put in a big effort and finished the trail on Sept. 20. Just 800 miles left of the 8,000-mile journey. This time on the PCT, we elected to go southbound to our previous stopping point. We locked in, trying to both soak up these final precious scenes of red meadows and pillow-like clouds while also getting the hell out before snow could stop our progress.

Spoiler alert: We did finish, but it wasn’t easy. And in the end, it wasn’t the training we did or the gear we had. It was solving the puzzle. The logic game. Because we had a relationship rooted in trust, we could speak openly about strategy and be thoughtful about how we accomplished the goal. And we were adaptable, rigid and unmoving in our goal — and flexible about how we’d get there. It was one long puzzle, and we solved it.