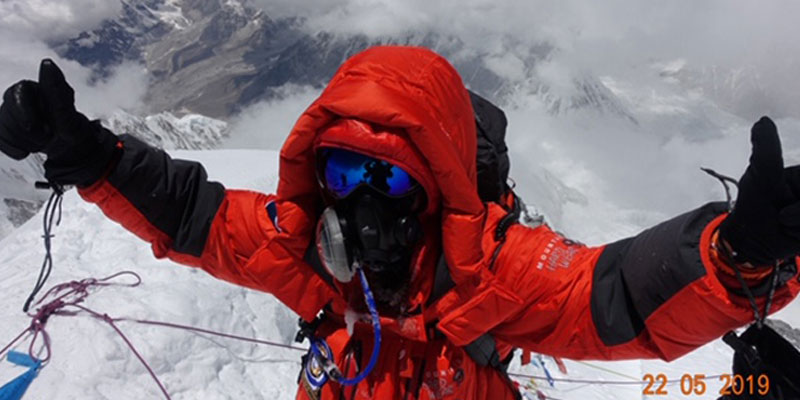 The final hours of Roxanne Vogel’s pursuit to summit the world’s tallest mountain in just 14 days total from door to door were akin to an episode of “The Amazing Race.”

The 14-day time frame (a record door-to-door summit) was something Roxanne, nutrition and performance research manager at GU Energy Labs, had been hyper-focused on for more than a year, all while pushing her physical limits with intense mountain training, strict nutrition plans and spending the better part of three months in hypoxic environments to prepare. The idea was that if she was in peak health and already acclimatized up to 20,000 feet, she could spend less time in base camp and move quicker up the mountain.

“I got there and I felt really good,” Roxanne said. “I was ready to hit the ground running.”

But training can’t control Mother Nature, especially on a mountain with extreme and varying weather conditions like Mount Everest. Despite being physically capable for the ascent, Roxanne had to patiently wait for a safe weather window to summit. The more she waited, though, the more she felt her goal slipping away.

“Most of the time I was there, I didn’t think we were going to make the two weeks. We were waiting on some weather issues,” she said. “By the time I did summit, I only had a couple days to make it back home.”

That doesn’t mean she didn’t relish the experience, and the views, however. Unlike many Mount Everest experiences in 2019, Roxanne and her team had the summit completely to themselves. Roxanne and her guide Lydia Brady, who’s summited Everest five times and was the first woman to ever summit without oxygen, had chosen a route up the north side from Tibet that only had been fixed with ropes hours prior.

“We looked down the mountain, to the south side even, and saw nobody. I was just like ‘Wow,’” she said.

And while Roxanne was taking in her moment on top of the world, all of her friends, family and fans back home were taking it in too. She was carrying an inReach Explorer+ satellite communicator, so everyone could watch her journey up the mountain. “Made it to the top, SUMMIT SUCCESS!!!” she wrote from her device.

She appreciated that everyone was able to view her MapShare and track her progress.

“People were so pumped about it,” she said. “It was a really big part of the project – having people able to follow along. We even had it set up on a monitor here at work so people could stop by and see where I was every day.”

The summit isn’t the end of the journey though, and after an exhausting 16-hour summit day, Roxanne had another task at hand: getting home to California in time to meet her goal of 14 days. She only had a few days to descend the mountain and meet a car waiting to drive her eight hours to the airport, then get aboard a plane for the 30-hour journey home. In the end, she made it with one hour to spare.

Any hiccup could’ve narrowed her margins even more. The final day, Roxanne and her team were supposed to stop for a refill of water at a camp on their way down. It wasn’t there.

“We were kind of lost and looking for the camp for awhile,” she said. “But then I pulled out my inReach and was able to see that was absolutely where the camp had been because I had dropped a pin there.”

With that confirmation, the team continued down to base camp.

“If I hadn’t known that camp was there for sure when we were standing right where it was supposed to be, we could’ve been wandering around for god knows how long,” she said. “It saved us.”

So it was with the break in the weather, an experienced partner, and a whole lot of training and preparation that Roxanne achieved her amazing race – Everest edition. And she already has big plans for the future … maybe back to the Himalayas, maybe to Antarctica, but certainly with an inReach in tow.