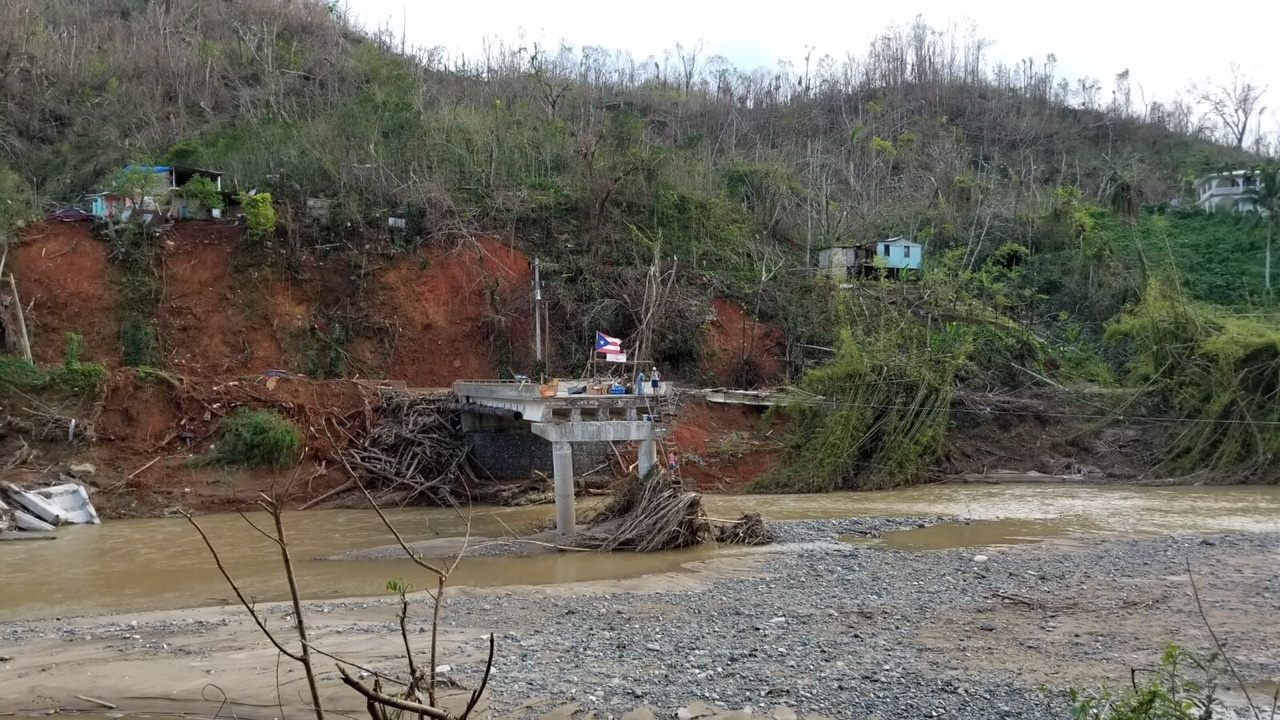 inReach: Connecting with Family and Friends During a Crisis

As of this month, there are more than 1,100 active inReach® devices in Puerto Rico and surrounding islands. Those devices have sent more than 356,000 messages in the days and weeks following Hurricanes Maria and Irma.

We received a number of emails from subscribers who shared with us how their inReach devices played roles in helping individuals connect with aid and assistance — as well as how the devices were essential tools for sharing information and giving peace of mind when other means of communication were not available. Here are some of their stories.

Sharing the Ability to Communicate When Other Systems Are Down

When Hurricane Maria made landfall on the island of Dominica, more than 3,500 students at Ross University sheltered in place while Category 5 winds brought destruction. When the storm ended, the students and the island’s residents were left without power and the means to communicate — unless they had access to a satellite communication device.

Bryan Bennett, a medical student at the university, had previously learned the benefits of having a satellite communicator when he served as a wilderness medicine instructor in Chile and Argentina. When he heard reports of the devastation on Dominica following the hurricane, he triggered an SOS on his inReach to contact the International Emergency Response Coordination Center (IERCC) at GEOS and gather information — beyond the campus — about the situation on the island. Staff at the IERCC contacted the U.S. State Department as well as the U.S. Embassy in Grenada and then relayed information from authorities that the students should remain in shelter and follow instructions from the university and local authorities. The IERCC also advised that the U.S. Agency for International Development was trying to locate resources to lend assistance.

Bryan and his fellow students soon learned that the university was arranging boat evacuations for the coming days, but in the meantime, most students had no means to communicate with friends and family to let them know they were safe and had shelter. Word spread that Bryan was sharing the use of his inReach, and over the next few days, hundreds of personal messages were sent from the students via the satellite communicator to provide updates to those concerned hundreds of miles away.

Comm's. Out of all the tools in a disaster/survival/emergency/medical kit, the inReach satellite communicator has continually been one of my most useful. The ability to have two way communications nearly anywhere on earth is invaluable to initiating and coordinating rescue as well as communicating with loved ones. The inReach has been there for me through countless wilderness trips and most recently Hurricane Maria. I rarely leave far from home without mine. For those of you who frequent wilderness areas without cell service or travel internationally I implore you to consider communications as an essential component to prepardness. • Yes, it works in a category 5 hurricane. • • Note: This picture features the original Delorme inReach SE which I have owned for ~3.5 years. Garmin recently come out with a new and improved model (SE+ and Explorer+) which I have not tried. The use of Iridium satellites for the service remains the same. I bought my own device and was not compensated for this post. • • • #inReachLife #inreach #garmin #hurricanemaria #prayfordominica #disasterpreparedness #wildernessmedicine #doomsdaypreppers @aeriemed

In the aftermath of a natural disaster, it’s understandably difficult to gather important information on the ground. Cheri Nelson of Idaho was very concerned when Hurricane Maria hit the island of St. Croix, one of the U.S. Virgin Islands. Her husband, Bryan Nelson, had already endured Hurricane Irma on the island, and according to Cheri, the fact that he purchased an inReach before his trip was the only thing that kept her sane in the days and weeks that followed both storms. Once Cheri learned that Bryan and others in the area were safe, she began to pass along helpful information.

“Bryan was able to use [the inReach] to allow some of the neighbors to contact their loved ones to check in,” Cheri said. “I was also able to feed news to Bryan every day so that he knew when curfew hours were [and] what stores were open.”

It took a full week before Bryan could place a call from a cell phone in town where communications had been restored, but cell service was not yet available at his location. The inReach proved to be essential for making arrangements for coming home. Since the airport was closed, it took more than 5 weeks for Cheri to arrange a flight for Bryan to finally get home. Cheri added, “Buying and using the inReach was the smartest decision we made during this time.”

A.J. Santiago lives in Minnesota, and his sister lives in Puerto Rico with 3 young children. When he hadn’t heard from her for 6 days after Hurricane Maria, he decided to travel to the island to locate them and bring them back to the mainland.

“As I packed my backpack and planned my mission, I knew I would need a way to communicate back to the U.S. to not only let them know I was safe but to coordinate return travel and anything else I needed,” A.J. said. “A device that sent prewritten messages was not going to work. I needed flexibility, guaranteed connection and if I could share my location to my family in Minnesota, that would be icing on the cake.” He previously had used Garmin GPS devices while serving in the U.S. Army as a Black Hawk helicopter pilot in Iraq, so he knew that the inReach he chose would be reliable, rugged and easy to use.

“Once on the ground in Puerto Rico, it was game on. I fired up the inReach, sent off a message that I was safely on the ground and began my mission,” A.J. said. “For 2 weeks straight, I used every feature I could on my inReach.”

A.J. posted daily updates to Facebook® to let everyone know how things were going with his search, sending 367 messages throughout 15 days. He also shared his tracking via a website he created days before his departure, and he used the Earthmate® app to navigate the island by using the mobile app’s map features.

“My secondary mission was to locate other families of friends who had not heard from their relatives,” A.J. said. “The inReach, combined with my smartphone, gave me a moving map that I could use to travel to parts of the island I had never been to before.”

A.J.’s efforts were successful. He located his sister and her children on the second day of his trip, and he helped locate many others and assisted with reuniting those individuals with their families and friends as well. He departed Puerto Rico with his family 15 days later. 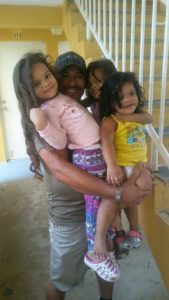 In the weeks that followed the hurricanes, Garmin has heard from others who were able to locate lost family members throughout Puerto Rico and communicate with family back on the mainland. One Puerto Rican resident, Nelson Sanabria, M.D., used a connected solar panel to keep his inReach powered and help aid his endeavors.

“Thanks to Garmin for this wonderful equipment,” Nelson said. “[The inReach] was my only communication system back home with my daughter in the mainland. For 23 days, I was able to stay charged by solar power and then bring my family back to the U.S. Just amazing and grateful to be able to save my family.”

A Communications Resource for Humanitarian Relief and Aid Efforts

Puerto Rico was hit hard by Hurricane Maria. In the days and weeks following the storm, many on the island did not have access to potable water, power or other necessary resources. A number of professional organizations deployed to provide aid, and many of those relief organizations are now relying on inReach to provide essential communications capabilities. In addition, many private citizens are using their skills and resources to help others in need in the Caribbean.

Chris Mackenzie of Texas traveled to Utuado, Puerto Rico, after the hurricane to find his mother-in-law. While there, he learned that it would take time to restore the electric transmission lines that were down, and many were living in difficult conditions with limited food and drinking water. Furthermore, while he had an inReach that provided him with the ability to communicate, others on the island lacked reliable communications resources, which made it difficult to identify areas of need, coordinate aid or make a call for help.

When Chris returned home to Texas, he soon learned of others collecting donations, gathering resources and organizing volunteers to aid the residents of Utuado and other communities. He joined those efforts and made a plan to return to Puerto Rico to provide help.

“We used our donations to purchase 2 more inReach devices to allow people to text their loved ones and to allow [their grassroots organization, United with Utuado] to send doctors, medics and volunteers to map out and deliver water filters to those living past the ruined roads,” Chris said.

At each house where need was identified, volunteers used the inReach to text a shorthand that could be used to let the mayor and emergency services know critical, life-saving information about where the survivors where located. 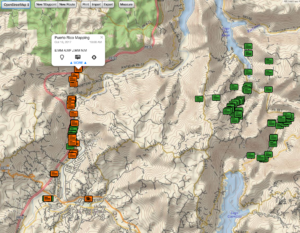 “The InReach allowed us to go into areas where there was no communication and people needed help,” Chris said. “Now we have doctors borrowing the devices as they rotate through Puerto Rico.”