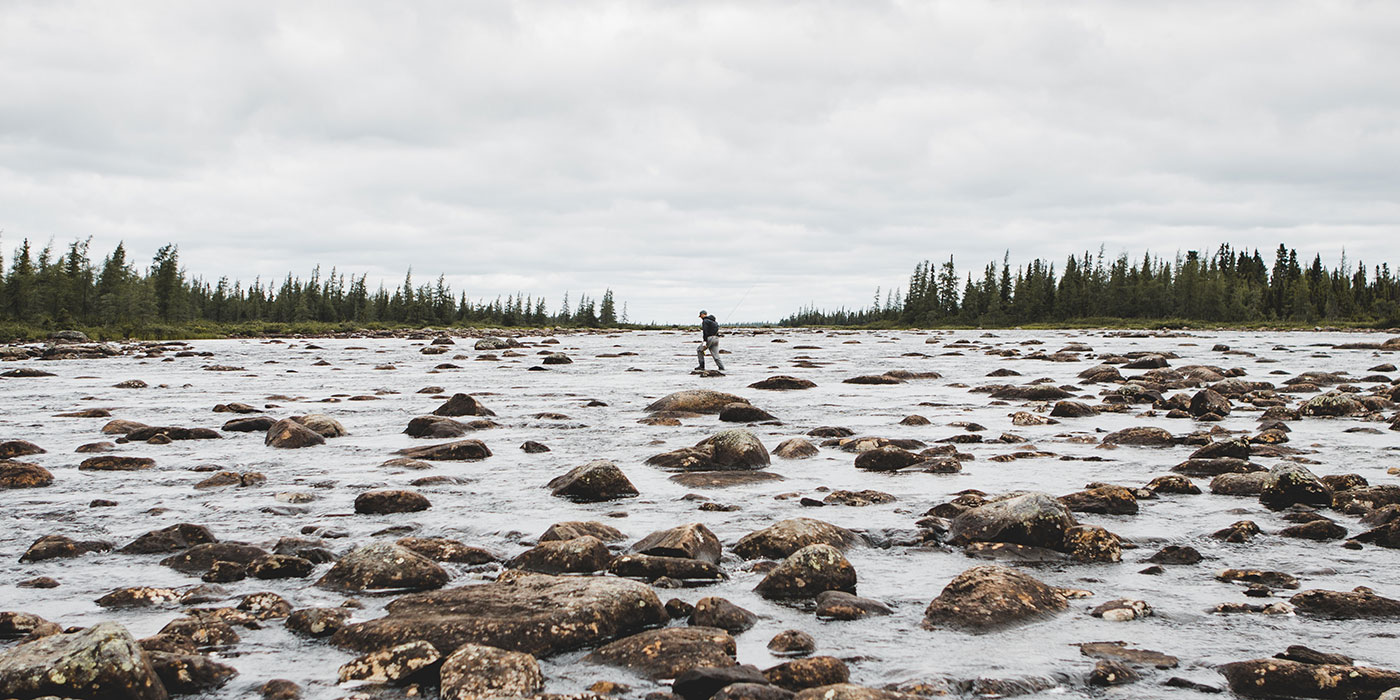 When Chase and Aimee Bartee got in their car — stuffed to the roof with gear — to travel nearly 1,000 miles to a largely roadless, uninhabited area of Canada, they weren’t entirely sure what they were getting into.

The plan was to travel by car, train and floatplane to Labrador, Canada, where 100,000 square miles of raw wilderness awaited them. It’s a place where — at least according to written record — more than 50% of the province’s lakes and rivers still have never been paddled.

The sacred nature of the undeveloped land, drastic swings between heat and arctic cold temperatures and closely managed tourism meant that for the 2 weeks they’d be camping in the bush, they were likely to be the only humans within 1,000 square miles.

That fact was a cause of stress, as they knew it could be days before help would reach them if something went wrong, but it was also the draw. Chase, a videographer, and Aimee, a photographer, are both avid fly-fishers. They were lured by the rurality of the land along with lore that the very first game fish discovered by settlers — the brook trout — thrived unadulterated in the waterways there. Thus came the inspiration for their latest movie, “Big Land.”

“A big driving force for us is to go to remote places and show people what’s there, just to get a conversation going so people will realize that there are special things in places that they didn’t even know existed, and that those things have an intrinsic value that’s worth protecting,” Chase said.

For half a year, Chase and Aimee closely examined maps and satellite images and researched the area. They convinced a young Nova Scotian — who was a licensed guide — to accompany them as well as a friend with extensive whitewater paddling experience. They tested an immense amount of gear, meal planned every day of the trip, became experienced paddlers by going on practice trips on Maine’s Allagash River and retrofitted their canoes to handle the adventure.

For a crew who was fully prepared to withstand constant swarms of bugs, cold temperatures and sleeping in the bush, the time spent in the quietude and wilderness of Labrador was magical and otherworldly. Chase and Aimee both hope to go back for a longer paddling trip at some point in the future.

“It was a land less complicated and conflicted by the burdens of the modern world,” Chase said.

inReach® for the Unexpected

Things weren’t always magical, however. From the beginning, as a pilot flew them over their intended drop-off area, it became evident to Chase and Aimee that things would not always go as planned on the trip — regardless of their highly detailed preparation.

The waterway where their trip was supposed to begin was so low that it was impossible for the pilot to land, causing a last-minute rerouting to the middle of a lake. They spent their days traveling upstream instead of down, chased instead of found the migratory brook trout (at first), dealt with equipment failure, avoided a black bear and hoped for the best when Chase cut his hand so deeply he would have required stitches in any other scenario.

They’d never been anywhere that remote before but maintained communication by using two inReach Explorer+ devices. They used the inReach satellite communicator devices to share updates on social media with all the people who had donated to their Kickstarter fund for the movie and gave updates to their family via two-way messaging.

“For my parents, it was a nice way to communicate even if it was just a very simple text message or just watching the MapShare™ page to see that we were still moving around,” Aimee said. “It’s not always easy for our parents to know that we’re going off to some wild place where rescue is at least 24 hours away.”

In Labrador, the weather can change quickly, which they discovered when they were forced to stay in their tents on an island campsite for several days, bound by 60 mph winds and rain.

“To be able to get weather data when you’re in the middle of nowhere, it did bring comfort to us,” Aimee said.

Because there was no infrastructure or marked trails or thoroughfares, they used the devices to track their routes and drop waypoints to label interesting places they had found. Plus, the beeps of messages from friends and family back home provided a comforting feeling to them while they were in a place with no other human connection except for each other, Chase said.

Ultimately, all the preparation paid off for Chase and Aimee. The voyage was, by all means, a success. At the end of their trip they finally found the migrating brook trout in abundance and then made the long journey home safely. Since then, the movie has been embraced by fly-fishers and outdoor enthusiasts alike and has sparked conversations about how to continue preserving wild, unencumbered places such as Labrador.

Since wrapping the film, they’ve taken many more trips to Canada, continued to develop their love for canoeing and done film work for various outfitters. Home base will be wherever they want — as they’re moving into a 1985 camper van.

“That’s just another reason to have the inReach devices, though,” Chase said, laughing. “Those vans have a tendency to stop working in the darndest places.”

They’ve started thinking about their next big film, which they hope will take them into the depths of Yellowstone National Park, trekking the backcountry of the park on foot while tackling the topic of wildlife conservation.

“We’ll definitely be in places where phone service is not good,” Chase said. “If there is an emergency, having the inReach is going to be so important.”

They’re looking forward to all of that, though, and advise other professionals and hobby explorers to seek more adventure in rural areas as well.

“Look for a green spot on the map, and go,” Aimee said. “It’s not hard to get into small, wild adventures.”

Learn more about Chase and Aimee’s work at tightloopsfly.com, or watch their latest film, “Big Land,” at vimeo.com/bigland.