Some people just have that desire to go bigger and bigger, Tyler Bradt is one of those people. Tyler is a professional whitewater kayaker and adventurer from Stevensville, Montana and he’s been battling rapids since he was the age of 6.

Tyler and 3 friends just broke the world record for kayaking 287 miles in just 24 hours. The previous record of 274 miles, was set in a distance-racing kayak on the Yukon River in Alaska and was the first time the record had been set on whitewater. Tyler, along with his inReach Explorer and kayaking pals set off on Marsh Creek at the headwaters of the Middle Fork of the Salmon and descended 5,550 feet over the course of 287.5 miles ending on the Salmon River just above the confluence with the Snake River.

“I had the inReach explorer in my lifejacket pocket where it could pick up signal. We used it to monitor our pace as well as our distance and accurately record our record distance descent.” 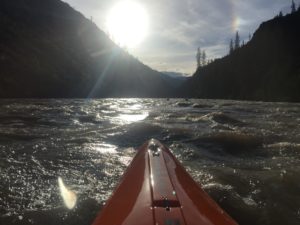 This isn’t the first big accomplishment for Tyler either. With 200 days a year spent on the water, Tyler has knack for breaking records. He has the world record for the highest waterfall descent in a kayak at 189.5 feet. He’s also paddled the highest volume rapids on the planet, Inga Rapids on the Congo River and has accomplished over 100 first descents around the globe.

Join the adventure and learn more about Tyler Bradt on his Facebook page here. He also just wrapped up a four-year adventure sport world sailing circumnavigation in a 42-foot sailboat named the Wizard’s Eye and you learn more about that at www.thewizardseye.com.