Hollywood has proven just how effective the combination of airplanes and rock and roll can be. The glamour of music paired with the romance of flight goes together as well as anything. It’s no wonder that Pink Floyd founding member Nick Mason would find passion in both. We recently had a chance to sit down with the aviation enthusiast at his historic hangar in England to talk music, racecars and flying. Mason, who just completed a full Garmin retrofit on his Eurocopter AS350 B3 Squirrel helicopter – including G500H, GTN 750, GTN 650, and more – explains his origins in aviation, how his passion grew and why he flies behind Garmin avionics.

Q: Tell us about your airfield.

A: Well, basically, it’s somewhere to house my assembly of cars that started 40 years ago, because I wanted to go motor racing. […] I started racing and I kept one racecar, and then I kept two racecars, and eventually I ended up with a [collection] of racecars. Finally, we moved them to this place, which was originally a World War One training field for the Royal Flying Corps, before the RAF even existed. It’s a lovely place to keep things because I’ve got two partners at the airfield both of whom run old airplanes. Old cars and old airplanes live very comfortably together.

Q: How did you get your start in aviation?

A: The start of my aviation career, I’m afraid to say, is not that glamorous. What actually happened was I was talking to a friend who is a display pilot about the fact that the one thing I found really difficult about being on tour with the band was the fact that all of us had become really nervous about flying. He told me the solution was to learn to fly, which has probably been the most expensive therapy I’ve ever undergone. But it was brilliant advice and of course I started flying. He found me the most wonderful character to teach me, we started off with a Jodel taildragger flight from London to Paris because that was the only place he thought you could get a suitable flying jacket. 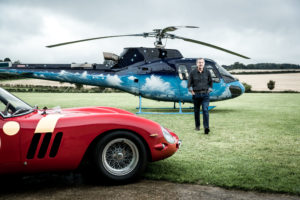 Nick Mason with his Eurocopter AS350 B3 and Ferrari racecar.

Q: How many years ago did you start flying?

A: I actually started flying about 30 years ago, and I started with fixed-wing, and I probably flew fixed-wing for about 10 or 12 years. We started with a Robin DR400, wonderful little airplane that I still have, but then with David Gilmour we ended up with a small collection of aircraft, and at one point had a Cessna Golden Eagle, which we actually used as a business tool. But sadly, when we stopped touring, one could no longer justify having a business tool. Then, David Gilmour got involved with a Robinson helicopter and my wife went up with him and said ‘this is what we should be doing.’ So I was dragged into helicopters next and after someone took us for a flight in the Jet Ranger we realized that we could really use this. We had kids and bags and all the rest of it, and suddenly there was something that really could carry everything that we could land in the garden, in the country or wherever. So I became a real convert to helicopters and have continued to be so.

Q: What was the most challenging aspect of flight training?

A: Well I think anyone who flies helicopters will say that the most challenging thing is learning to hover; the rest of it is almost like flying a fixed-wing. But hovering is extraordinarily difficult in a way because there’s that feeling that you’re just never going to get it, and then it’s this extraordinary weird thing about learning something where you gradually learn how to do it, but you’re almost unaware that you’re even learning how to do it. That’s infinitely fascinating really; I ended up, in fact, training as an instructor because it’s so curious to see how you do it and how other people do it. 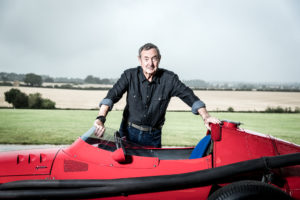 Nick Mason sporting the D2 Bravo Titanium pilot watch with one of his racecars.

Q: Are there similarities between playing music, driving a racecar and flying a helicopter? If so, what are they?

A: There is in fact a similarity between all of these activities, and it’s an interesting one, because all of them – whether it’s flying, driving or music – create a moment of anticipation and excitement and adrenaline. You never approach any of them in an offhand way; they all demand a certain amount of attention and a certain amount of adrenaline.