What has been an adventure years in the making, the first Afghan civilian female pilot, Shaesta Waiz, is about to embark on a mission that will exceed 25,000 miles. The Dreams Soar team has been putting the finishing touches on every last painstaking detail that will carry Waiz and the Beechcraft Bonanza she’s piloting solo through 5 continents and ultimately 34 stops.

The Dreams Soar team has a distinct mission: to inspire girls and young women worldwide to dream big, and achieve more – especially in the fields of aviation and STEM (Science, Technology, Engineering and Math) fields. At each of the 34 strategically selected stops, Waiz will host an event featuring women in aviation and STEM fields aimed to inspire our future’s best and brightest. Her adventure will launch on Saturday, May 13, from Daytona Beach, Florida and culminate a few months later at the same location. 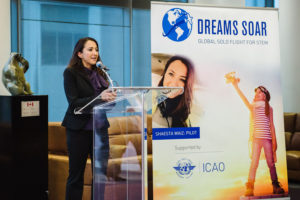 Shaesta Waiz will host STEM events at each of her tour stops.

Shaesta Waiz emigrated to the United States from Afghanistan as a young girl with her parents and five sisters. After growing up in Richmond, California, she became the first person in her family to earn a bachelor’s and master’s degree – both from Embry-Riddle Aeronautical University – achieving her pilot’s license along the way.

We’re proud to support Shaesta and her team on this ambitious mission. Her 2001 Beechcraft Bonanza A36 is equipped with GNS 530W, GNS 430W and a G5 Electronic Flight Instrument. Additionally, Waiz will be utilizing the aera 660, inReach Explorer+, Garmin Pilot and Garmin Virb Ultra 30 action cameras throughout her trip. Be sure to follow her along the way at dreamssoar.org, or on social media at @dreamssoar.