We’re excited to announce the Garmin Head-up Display (GHD 2100), for super-midsize, midsize and light business aircraft. The GHD system incorporates modern optical design within a single display unit, projecting a crisp, clear view of pertinent flight information while also offering superior integration with Garmin Integrated Flight Decks for a near-seamless transition between the GHD and primary flight display (PFD). The GHD is a compact, self-contained projection system with a large 30-degree by 24-degree field-of-view. Driven by the Garmin Integrated Flight Deck, the GHD projects a familiar presentation of critical flight information, symbology and more, contributing to increased safety and operational benefits and providing optimal situational awareness throughout every phase of flight.

“Industry studies indicate that flying with a HUD is safer in reduced visibilities, deteriorating weather conditions and in challenging environments,” said Carl Wolf, Garmin vice president of aviation sales and marketing. “We’ve worked hard to harmonize the GHD and Garmin’s Integrated Flight Decks so pilots are provided with a seamless in-flight experience throughout the cockpit. Pilots can expect the innovation and future growth potential available with the GHD to be matched with the same forward-thinking advancements we’ve cultivated for more than a decade with the Garmin Integrated Flight Deck and many other avionics solutions.”

We’re also pleased to announce the new GHD will be incorporated on the new super-midsize Cessna Citation Longitude, in conjunction with the G5000 Integrated Flight Deck. Wolf added, “We are proud to expand our long-standing relationship with Textron Aviation by providing the latest HUD technologies on the new, state-of-the-art Citation Longitude business jet.” 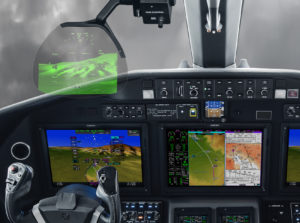 GHD installed with G5000 in the Citation Longitude.

A small, compact projection system allows the GHD to be integrated into a variety of business aircraft cockpits while also maintaining comfortable head clearance. The GHD delivers a 30-degree, wide angle field-of-view and is placed at a comfortable viewing distance from the pilot’s head position. Information is displayed in an easy to read format and delivers supreme clarity and brightness in all lighting conditions. Whether in clouds, day or night, the GHD incorporates intelligent dimming, which automatically adapts to ambient light and allows pilots to focus on flying the aircraft. Further reducing pilot workload, the GHD offers declutter mode so pilots can optimize the display to suit their needs. The GHD boasts a simplistic control interface and offers similarities in tactile operation with the Garmin Integrated Flight Deck for an even more seamless transition throughout the cockpit.

Because the GHD is highly integrated with the Garmin Flight Deck, consistent symbology is utilized between both systems so pilots experience a near-seamless transition when flying with the PFD or with the GHD. In addition to displaying flight-critical PFD information, the GHD displays conformal attitude and flight path information overtop the real-world view, alongside navigation data, flight plan information, autopilot modes, master warning/caution annunciations and more.

Also integrated on the GHD, SurfaceWatch provides visual and aural cues to help prevent pilots from taking off and landing on a taxiway, on a runway that is too short or on the wrong runway based on performance data entered during preflight. For example, while on approach to a land on a runway that is snow-covered or in an airport environment with reduced visibilities, SurfaceWatch highlights and outlines the pilot-selected runway on the GHD and on the PFD so it’s easier to identify.

Pilots are provided with an enhanced level of situational awareness with SVT, which presents a 3D depiction of terrain, traffic, obstacles, the runway environment and more within the GHD, supplementing the outside view with pertinent flight information. A powerful graphics processor generates the synthetic vision view, which closely resembles the same SVT view on the Garmin Integrated Flight Deck. Because the synthetic vision image replicates what the pilot would see outside the cockpit on a clear day, pilots can more easily transition from flying with the GHD to the flight display or outside view.

The GHD is positioned to further expand its present capabilities. Future options such as integrating with external cameras, including Enhanced Vision Systems (EVS), provide significant improvements in situational awareness in fog and other low visibility situations. Future capabilities also include integration with a Combined Vision System (CVS), which blends EVS and SVT images to present pertinent levels of detail to the pilot, particularly during approach and landing.