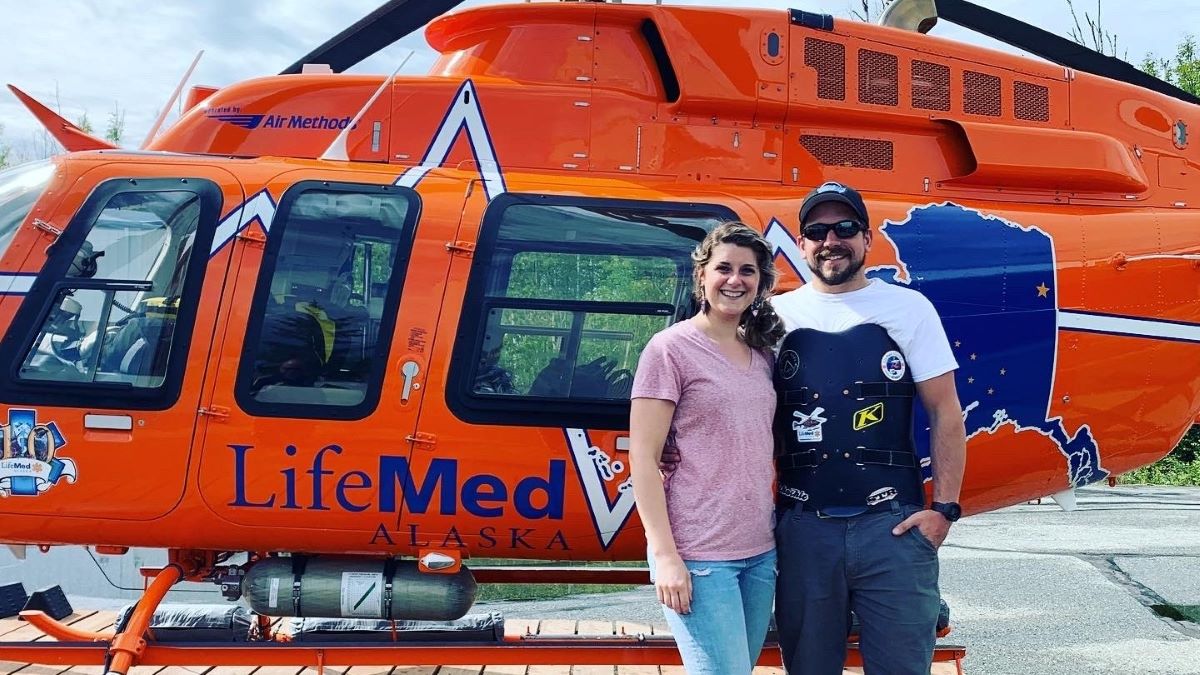 Gabe Kitter, a 31-year-old lifelong Alaskan, has been riding snowmobiles since nearly as long as he could walk. He considers himself a very experienced rider and shared with Garmin the story that he said would be “unbelievable if you would have told it to me previous to my accident.”

The accident happened on a spring hunt in the mountains just south of the small town of Cantwell. It was me and my hunting partner’s second weekend in a row chasing tracks and covering as much country as possible early in the morning — before the heat of the sun caused the snow to become mashed potatoes and impassable. Due to the great concrete-like snow conditions, it made it easy to cover ground early in the morning.

The story starts with the typical Pop-Tarts breakfast in the enclosed trailer on the side of the highway around 7 a.m. My partner, Steve, and I set out around 8 a.m. to a predetermined location we had scoped out the night before. We crossed a large swamp, picking our way around the open water caused by the beaver dam. We started to work our way into the base of the valley, where we had high hopes of finding fresh animal signs.

On our way into the valley, we stopped to look at some massive tracks. As we continued to carefully pick our way down fairly steep hills, we finally made it to the valley floor. Once we had reached the bottom of the valley, we decided to make our way up the left side the valley. After a half-mile or so, we came across a bear den that looked to be a couple of days old. The dirt was pulled out, and bear tracks there were crusted over and old, which meant the bear probably wasn’t going to be milling around nearby. We decided to split up and look for fresh tracks. I decided to cover the left hillside, and Steve stuck to the valley floor. We continued our way into the valley searching for signs. We soon worked our way out of sight of each other.

As I made my way along the left side of the valley wall, I found myself continually crossing smaller ravines. As I started to make my way down one of the ravines — about 15’ tall — I realized the last 5’ of it was straight down. At this point in the story, it all comes from what we have put together from machine tracks and prints in the snow. I have no memory of it.

From minimal marks in the concrete snow, it looks like I tried to hit the brakes but started to slide down the hill. Right before the edge, there were marks indicating that I gave the machine throttle — trying to keep the machine level while it went off the ledge. When I landed on the solid snow, I hit my face on the handle bars and was knocked unconscious. The machine continued to coast down and back up the other side of the valley at an angle. About 10’ up, the machine was at such an angle that it started to roll back down the valley. My body got wrapped up in the machine as it rolled down the hill.

Roughly 10 minutes or so later, I woke up on my stomach with my face in blood-soaked snow from cuts on my forehead and nose. I immediately tried to get up and was not able to. I struggled for a couple of minutes to get myself rolled over to my back and get my coat unzipped and arms out of the sleeves. I knew at that point something was very wrong with my back. Why couldn’t I get up? Why did I have such a hard time rolling over to my back? Everything was extremely fuzzy, and I had no recollection of what happened.

I was in and out of consciousness probably more than I can even recall. I looked around at the pieces and parts of my machine strung out in a yard sale fashion above me — and my mangled sled next to me. Realizing at that time that I couldn’t hear or see anyone around me, I tried to get up, and for the first time in my life I honestly couldn’t get anywhere. As hard as I tried, I couldn’t get up, couldn’t move closer to my machine.

Roughly 30 to 40 minutes after wrecking, my hunting partner found me and made his way to me. He arrived at a location in the valley where we’d agreed to meet, but he saw no sign of me and turned back to look for me. Once he arrived, he did a quick look over and, as expected, started asking questions. Steve quickly realized something was seriously wrong when I struggled to answer simple questions. He then used my inReach® satellite communication device to activate an SOS. Steve started communicating with emergency services while piling coats and gear on me to warm me up as the adrenaline started to wear off. It was about an hour before an Alaska State Trooper helicopter flew into the valley.

Later, we found out that the trooper/pilot had assessed the situation and found he couldn’t help us on his own, and there was nowhere for him to land. The trooper patched us to LifeMed, a medical helicopter service that covers the entire state of Alaska. Once in contact with LifeMed, we were told that the helicopter was leaving Wolf Lake Airport and was headed our direction. ETA for the helicopter was roughly 30 minutes. These events took place around 2 p.m., so I had been on the mountainside for 4 hours at this point.

It was 3 p.m. by the time the helicopter arrived and landed a couple of hundred yards away from me. The air medics and pilot made their way to me up the mountainside in waist-deep snow. They started asking questions and administering medication to make the move down the mountain as comfortable as possible. I was placed on a backboard, and then what looked to be a very large open rubber duffel bag was placed under the backboard to allow me to slide on the snow easier. The two medics, one pilot and Steve each grabbed a handle of the makeshift sled I was on and told me to hold on. It was a rough and painful 10-minute ride down to the helicopter, to say the least.

I was transported by helicopter to Mat-Su Regional Hospital, where I was met by my wife, Lindsey, and parents on the hospital lawn. In the emergency room, it was confirmed that I had broken my L1 vertebrae, tore the right psoas muscle and suffered a severe concussion.

Fortunately, I have since been able to make a full recovery. I’ve not only had plenty of time to recover but had the time to reflect on the things that allowed that day to go as smoothly as it did.

Thank you again to everyone that helped that day and the days that followed. I seriously couldn’t have done it alone. And thank you to Garmin — the whole process with the Garmin IERCC services was great.