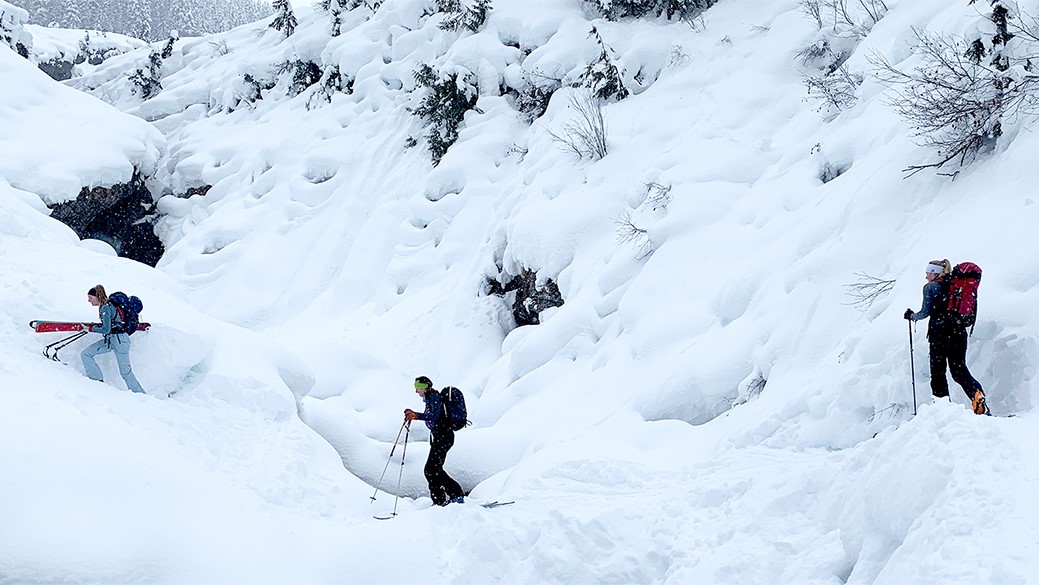 After Marlies van Dijk tore her ACL deep in the backcountry while skiing with her family — immobilizing her from any further skiing — she had to initiate an SOS on her inReach® satellite communicator and crawl to safety. She shared with Garmin what she felt she did right that day — and what she would do differently next time.

It was a perfect adventurous family getaway plan: ski Rogers Pass, a high mountain pass through the Selkirk Mountains of British Columbia, for two days over the holiday season with my two kids, Desiree (16 years old) and Pascale (18 years old), and my spouse, Clayton.

We are all experienced backcountry skiers and on the first day opted to ski a very familiar area to ease into it. It was a fabulous first day with spectacular snow and conditions. It was on day two that our holiday got interesting.

Looking to avoid the large crowds in the area at the time, we ventured to Bonney Moraines. It is one of the gentler areas to ski, and the guidebook calls it “mini-golf” type fun. We made it to the moraine, and we thought it was more like “there is a lot of snow here” type fun. As a group, we decided that 2 p.m. would be our turnaround time, no matter what. The days were still short, and sunset was around 4:45 p.m. We did two runs on Bonney Moraines before heading back at 1:45 p.m. Right on schedule.

The ski out from the moraine is densely treed, and you have to pick your way through it. I could tell I was getting tired, but nothing out of the ordinary. The girls were up ahead, and Clay and I were buddied up. I had just found what I thought was a nice little path through some trees when it happened. My body was going right, and my skis snagged a branch and stayed straight. The snap in my right knee was impossible to miss as I fell. It hurt.

After a few minutes, I scrambled to my feet to try to keep going. Positive thinking. But my right knee buckled and gave way. I tried it one more time, but weight bearing was impossible.

I did not contemplate my options for long. It was 2:15 p.m. and cold. I knew I was not skiing out and that daylight was limited.

“But how much more of these trees do we have?” I asked Clay. “I’m not sure, but it’s a ways until the open area,” he said. I had my mind set on the area above what’s called the “Elephant Trunk,” which seemed like a reasonable place for a helicopter to land. I gave my skis to Clay and told him I would try crawling. It was 2:30 p.m.

Clay quickly put my skis on his pack as I started on my way. Looking at my options, staying on the uptrack was my only way of not sinking in. But crawling did not hurt my knee. Clay quickly instructed Des, who was closest to me, to stick with me as I made my way. Pascale grabbed my backpack, and she skied out ahead of us. Des kept directing me for good spots to slide down — and like every teenager, got some video footage along the way. It was not pretty. All I could think about was how this situation could end.

Clay found that the trees kept snagging my skis on his backpack, and at one point they smacked his helmet pretty good. Lots of spots at Rogers have cellphone service but not where we were. We weren’t sure if we should activate the SOS right away or make our way to the open area so that the helicopter could see our coordinates. But about 15 minutes into my crawling adventure, Clay opted to activate the SOS (2:46 p.m.). I remembered that communication had to be brief and factual — so I yelled, “Tell them I am a 52-year-old female who can’t weight bear!” My girls told me later that I must have said that 10 times throughout the ordeal. Crawling, it took me about an hour and one fall into a tree well when I heard Pascale say that she saw the open spot through the trees. It was still daylight, but dusk was not far off.

In the meantime, Clay had been successfully texting back and forth with the Garmin International Emergency Response Coordination Center (IERCC). We were told that a helicopter was on the way, so Clay instructed Pascale to help him pack out a helipad, and Des braced my leg with my poles and duct tape. It was about 30 minutes after arriving to this spot when we heard the chopper come up the valley. I can’t tell you how incredibly grateful I felt.

They landed on the pad we had made (marked with poles) at 3:47 p.m. — exactly 1 hour after Clay had pressed the SOS button on the inReach device. Two staff members hopped out and asked me how I was doing before making a plan with Clay. Because we declined an ambulance — and they couldn’t leave me alone at our vehicle — they decided that Pascale would fly out with me, and Des would ski out with Clay.

The two staff members brought me to the helicopter in only a few minutes. Pascale jumped in after me. The rescue staff and helicopter were fantastic — only asking pertinent questions and moving expediently to get me into the helicopter. I could not help but shed some tears once we were in the air. How lucky we were to have the inReach and this amazing national park rescue system!

There are things we think are important and things we would do differently, even though things worked out for us:

1. The inReach device was invaluable. Ideally, every party should have at least one satellite communication device and be familiar with how to use the device before the beginning of each outing. In our case, we had the inReach paired to a mobile phone and used the Earthmate® app from Garmin for messaging during the emergency.

2. Press the SOS button as soon as the event happens. Don’t wait. It takes time for the rescue efforts to organize.

3. Dedicate roles as you would with an avalanche or emergency event. There should be a leader who handles communication with the Garmin IERCC, a support person for the injured individual and a helper to carry equipment and prep for the rescue.

4. Bring things to keep you warm. I had hot tea, and it was gold when I was shaking to the core waiting for the helicopter.

5. Be prepared to stay overnight. There is no guarantee that weather conditions will permit a speedy helicopter evacuation. Bring a sleeping bag or a bivy sack to be prepared for staying the night. We did not carry this at the time and now ensure someone in the group has one on every trip.

6. Bring a candle, matches, saw (and some cedar or cotton balls in petroleum jelly) in case you need to make a fire. We had this.

7. Set a turnaround time that gives you at least 2 hours of daylight.

8. Bring a ski guide rescue tarp. A guide friend told me about this after my rescue. It’s a great idea for one person in the party to have this.

To end the story, I did go to the emergency department in Banff, and they confirmed that I had torn my right ACL and needed surgery. Though the event was unfortunate, it could’ve been worse. And now we still can have a good laugh at “52-year-old female, can’t weight bear.” Happy skiing!