When climbing Peak Fifteen in 2015, one of Eddie and Randy’s partners was using an inReach® satellite communicator, and they discovered its benefits. Eddie purchased his own for the 2016 climbing season, and began using his inReach device to message his wife when he reached a summit, got down safely, returned to his campsite and more. He also set waypoints at specific locations to ensure he returned the same way he’d come and used MapShare™ so others could follow his adventures. It hadn’t occurred to him, however, that he might end up using his inReach to assist someone else in distress.

On a sunny summer afternoon in 2017, the father and son were backpacking up the West Maroon Creek Trail “on a quest to bag four Elk Range thirteeners,” Eddie said. They began their trek late in the afternoon, but it was only about an hour into their hike when they heard 3 blasts of an air horn followed shortly by the arrival of a breathless young woman, who told them that her friend Karen was injured and needed help.

Karen’s hiking adventure had started 3 days prior. She had flown from her home in the Midwest to join three friends in Colorado and hike the Four Pass Loop in the Maroon Bells-Snowmass Wilderness. The group had experience hiking and were careful to prepare. They arrived on a Sunday and drove to Aspen to acclimate to the higher altitude for 24 hours. (Aspen is around 8,000’.) The four hydrated, didn’t consume alcohol and got a good night’s sleep — all good steps to take to avoid altitude sickness.

They rose early the next morning to get to the trailhead and begin their 5-day hike. The group reached their first camping spot around noon at an elevation of about 10,700’. Karen said she got sick following dinner. She didn’t realize that this was the first sign of altitude sickness. Karen and her friends discussed the possibility of heading back, but they decided to see how she felt in the morning. Karen had brought supplemental oxygen, which she used that night, and she kept consuming liquids to stay hydrated and went to sleep.

Karen woke before her friends to have a good breakfast and drink fluids with electrolytes. She decided to carry on with the hike, but in hindsight, she knows now that she wasn’t in the state of mind to make a sound decision.

Her recollection of events is blurry from this point on. The group reached the summit of West Maroon Pass (at 12,500’) around noon. “I remember it was beautiful, but I started to decline. My friends told me I was stuttering and shaking all over,” Karen said.

Karen’s friends knew they needed to get her down the mountain and off the trail quickly. They were about 8 miles from their car. The friends took turns helping Karen climb down and carry her pack. Karen has no recollection of this portion of the journey, but as she descended, they reported that she began to feel better. Still, she was out of breath, so they kept giving her supplemental oxygen.

Around 4:45 p.m., about 3.5 miles from the car, Karen stopped, went stiff, fell to the ground, hit her head, and began to vomit and have a seizure. Two of her friends are nurses and the third a doctor, and they acted quickly to stabilize her.

Several hikers arrived to offer support. One of Karen’s friends ran down the trail to get help, and she ran into Eddie and Randy. Eddie triggered an SOS on his inReach Explorer® device, and he and Randy communicated with staff at the International Emergency Response Coordination Center (IERCC) at GEOS that Karen had collapsed and was injured.

Eddie and Randy hiked on to reach Karen, so the IERCC would have the coordinates of her exact location. Eddie informed the group gathered around Karen that a search and rescue ground crew was already on its way; however, Eddie saw that Karen was semiconscious and her breathing was extremely labored. “Randy and I used the inReach to provide updated information about Karen’s condition and requested that she be given a helicopter evacuation due to the severity of her condition.”

The IERCC provided emergency services with an update and soon shared with Randy and Eddie that a rescue team was on its way by helicopter and would arrive soon.

The ground team – who happened to be conducting a training exercise nearby – arrived about 8:30 p.m., and the helicopter and rescue team arrived in the dark around 9 p.m. Once Karen was stabilized, the rescue team transported her to an area hospital for treatment.

It would be 3 days after being evacuated before she was able to grasp her situation. Karen learned that she had suffered from high-altitude cerebral edema, which can be fatal, and other conditions that led to her illness on the mountain.

“Time was of the essence. The rescue team almost couldn’t fly into the area,” Karen said. “I hope this experience can help others learn to carry a satellite communicator. I’m convinced that it is part of what saved my life.”

Karen continues to recover. She hopes to hike again, but likely not at altitude. She is grateful for the assistance she received on the mountain from strangers and for the quick response from the rescue team. 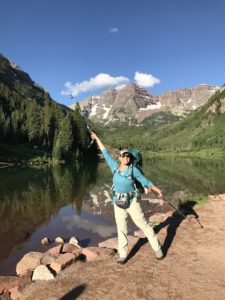