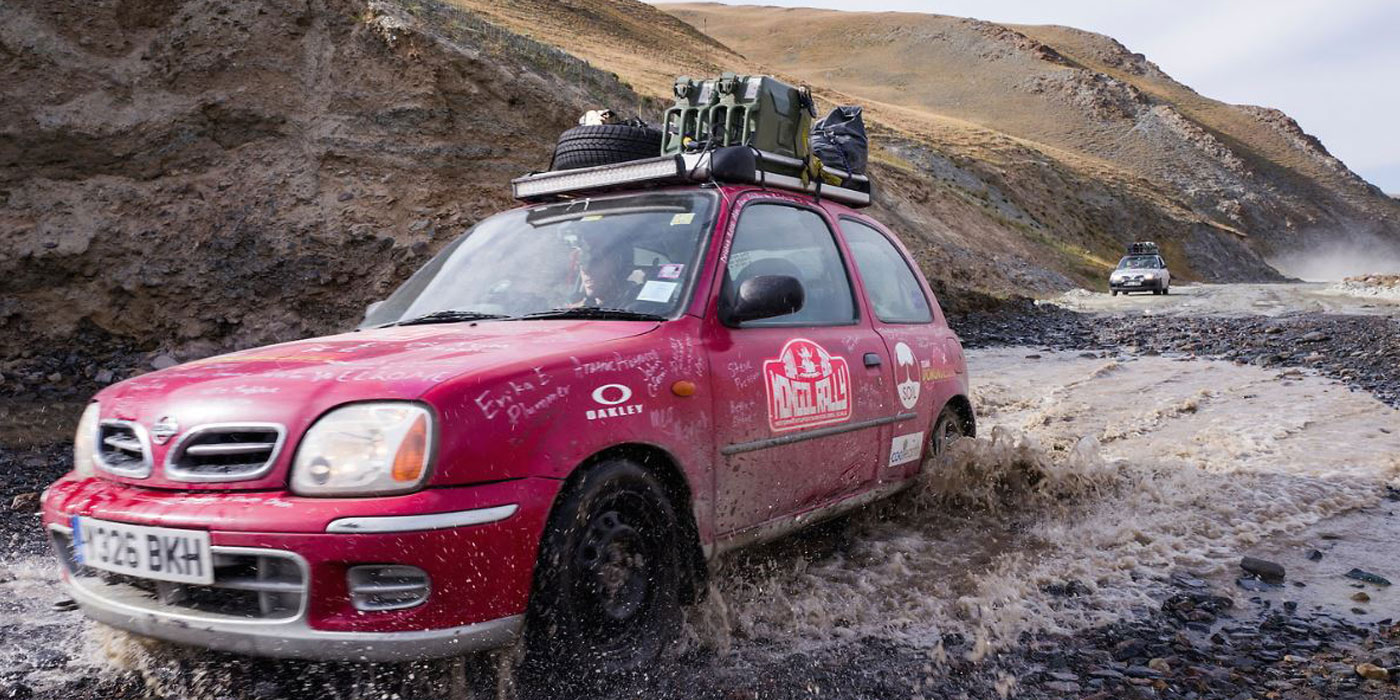 Getting Properly Lost and Generously Found

There are some who plan their ventures meticulously to avoid difficulties or obstacles. Others embrace challenges and seek the unknown. For the latter, there is the Adventurists. Started by Tom Morgan, this U.K.-based company creates large-scale events where participants can escape, in their words, “boringness and predictability.”

In 2016, Americans Scott Gurian and Drew Gurian participated in the Adventurists’ 2016 Mongol Rally — an epic road trip that took the brothers 7 weeks to complete. They were prepared for their journey and endured many challenges along the way. However, they eventually made a costly mistake in an extremely remote area that put the completion of their adventure, and themselves, at risk.

Scott and Drew are experienced travelers. As a journalist and a photographer, respectively, their work has taken them around the world. During their time off, the brothers like to travel together to a wide range of locations — from Galápagos Islands one year to Thailand and Cambodia the next. Rosi — a British friend who lived in Australia and whom they had met during an eventful trip to Cuba — later invited the brothers to join her on a “crazy trip” with her best friend, a Brit named Jane. That trip was the Mongol Rally.

“I’ve worked in public radio and print reporting for many years,” Scott said. “I thought, I’d love to document this whole crazy adventure, not just the trip itself, but all the planning that went into it, getting all the visas and planning our route that took many months of work.” The brothers agreed to join Rosi and Jane. Scott recorded their quest to complete the Rally and later shared it on his podcast, “Far From Home.”

The rules of the Rally and the spirit of the Adventurists’ event require teams to be ill-equipped, so they all knew the trip would not be easy. True to form, the trip included many misadventures. The 4 friends, along with helpful strangers they met along the way, rose to overcome the challenges.

Tom Morgan first started a rally to Mongolia escapade in 2004, which sparked the idea for the Adventurists. The Mongol Rally has never been a race along a defined route. Participants aren’t encouraged to be first to reach the finish line. Instead, the Adventurists state that the objective is to take an “unroute” to the final destination and encounter along the way “one of the most interesting things in life: the unexpected.”

The event has some basic rules. Teams must drive a “farcically small vehicle.” Basically, it has to be a small used car with a 1.2-liter (1,200 cc) or less engine or a used 125 cc or less motorbike. Scott and Drew’s Team Donundestan and Rosi and Jane’s Team Sugar + Spice both chose Nissan Micras.

Secondly, teams are on their own. The Adventurists don’t want to prescribe a specific route, provide guides or pick you up when you break down. When the unexpected happens, don’t call the Adventurists’ headquarters for assistance. Take care of it yourself. They encourage teams to be inventive and explore.

The third and final rule is that teams are required to raise a minimum of £1,000 for charity. The Adventurists state, “It only seems fair that if you’re having the mother of all adventures on [the planet], you should give a little back to help keep it in good shape.”

On July 16, 2016, the Mongol Rally teams convened at the Goodwood Racecourse south of London. (The Rally now begins near Prague in the Czech Republic.) The next day, some 300 vehicles and 1,000 participants set off for the finish line in Ulan-Ude, Russia (just across the border from Mongolia), taking a multitude of paths to discover the unexpected.

In preparation for the journey, the Team Donundestan and Team Sugar + Spice Micras had been modified with roof racks to carry jerry cans of extra fuel, gear and spare tires. Scott and Drew included an inReach® satellite communicator among their gear. “We got it for safety purposes, but also just because it’s kind of cool,” Scott said. “If you’re going on a trip like this, it’s awesome to let all your friends and family members back home follow you and see this crazy adventure you’re taking.”

Despite the language barriers and political and cultural complexities, they encountered many kind and helpful individuals along the way. Scott found the people of Iran to be some of the friendliest he had ever met in his travels. “There was this sense of Persian hospitality, where you chat with people, and in 5 or 10 minutes, total strangers suddenly invite you to come to their house for dinner and meet their families. It’s just incredible.”

In preparation for the trip, they took a class in basic car repair, anticipating the rough roads and miles ahead would present problems. But their car trouble was more than they could handle, which led to some challenging negotiations and decisions. In the first 3 weeks of their journey, the Team Donundestan vehicle broke down about 4 times. They visited many mechanics for a series of repairs, including having a head gasket replaced in Uzbekistan.

Part of their route included the Pamir Highway, which is the second highest international highway in the world and considered to be one of the most dangerous. Their compact cars weren’t quite up to the challenge, and their bodies suffered from altitude sickness and cold temperatures.

The Adventurists encourage teams to “Get Lost. Properly lost.” The teams did exactly that a number of times. And when they finally reached Mongolia, a succession of navigation decisions put the teams in a difficult situation.

Mongolia offered beautiful vistas, but it proved most difficult to drive through and navigate. “The main roads in many places were nothing more than unmarked tracks through the sand and grass,” Scott said, “and there were occasional shallow rivers we had to drive across.”

In episode 20 of the “Far From Home” podcast, Scott shared how they had a close call when Scott and Drew’s vehicle got stuck at one water crossing, and Rosi and Jane had to tow them out. That luck didn’t last. They were concerned that they might get stuck at another river crossing up ahead, so they made the decision to venture off the main path onto a parallel trail.

A short time after making the decision to try the alternative path, both cars got stuck. (Listen to episode 21, “A Costly Mistake,” for the full account.) They made a concerted effort to extricate the cars, but they came to the conclusion that they were stranded. Nothing could be done, and they realized the gravity of their predicament.

“Mongolia has the lowest population density of any country in the world,” Scott explained. “If you get stuck, you might have to wait a very long time before someone else comes along.”

It had been many miles since they had last seen any people — the last being a young boy herding a flock. Even then, it wasn’t likely the boy could have helped or been able to communicate in English. They decided to use their inReach device to message a friend back in the U.K. to try to find towing assistance. Eventually, their friend reached out to the American embassy in Mongolia.

The 4 soon grew concerned that the weather might change, and they took refuge in an empty structure nearby. A short time later, they received messages from the embassy that Mongolia’s National Emergency Management Agency (NEMA) had dispatched a couple of ground teams to provide assistance. They would arrive after sundown to tow them out and help them back to the main road.

Episode 22, “The Longest Day Ever,” shared the dramatic details of how they were rescued. “We later found out that we bore the embarrassing distinction of being the first group of American drivers that NEMA had ever helped,” Scott said.

They were glad they had an inReach on hand to share their location and communicate the need for assistance. They were also thankful that the embassy offered to help and were amazed at the generosity of the Mongolian NEMA teams for providing assistance at a late hour in their time of need.

“A few months after our ordeal, the embassy sent us a photo of the American ambassador presenting a certificate of appreciation to the head of NEMA to thank them for their efforts on our behalf.”

The Journey Is the Reward

But Scott found that he wasn’t finished. He decided to drive back to the U.K. across Siberia, Ukraine, Poland, Germany and the Netherlands (with a side trip to Italy and the Vatican). In all, he traveled a total of 18,000 miles through 23 countries over the course of nearly 4 months.

Scott shared that despite the frustrations, the hardships they encountered in completing their journey made it all the more rewarding. The adventure also provided many hours of recordings for Scott to sort through. “I’ve got lots more great adventure stories lined up.”

Listen to Scott Gurian’s award-winning podcast at farfromhomepodcast.org. Drew Gurian’s photos from their Mongol Rally adventure are on Instagram and his website: https://www.drewgurian.com.

The Adventurists gather people to participate in incredible adventures such as the longest horse race on Earth, a sailing race where participants test their seafaring skills in traditional vessels off the coast of Tanzania and many more. See how they “make life less boring” at theadventurists.com.