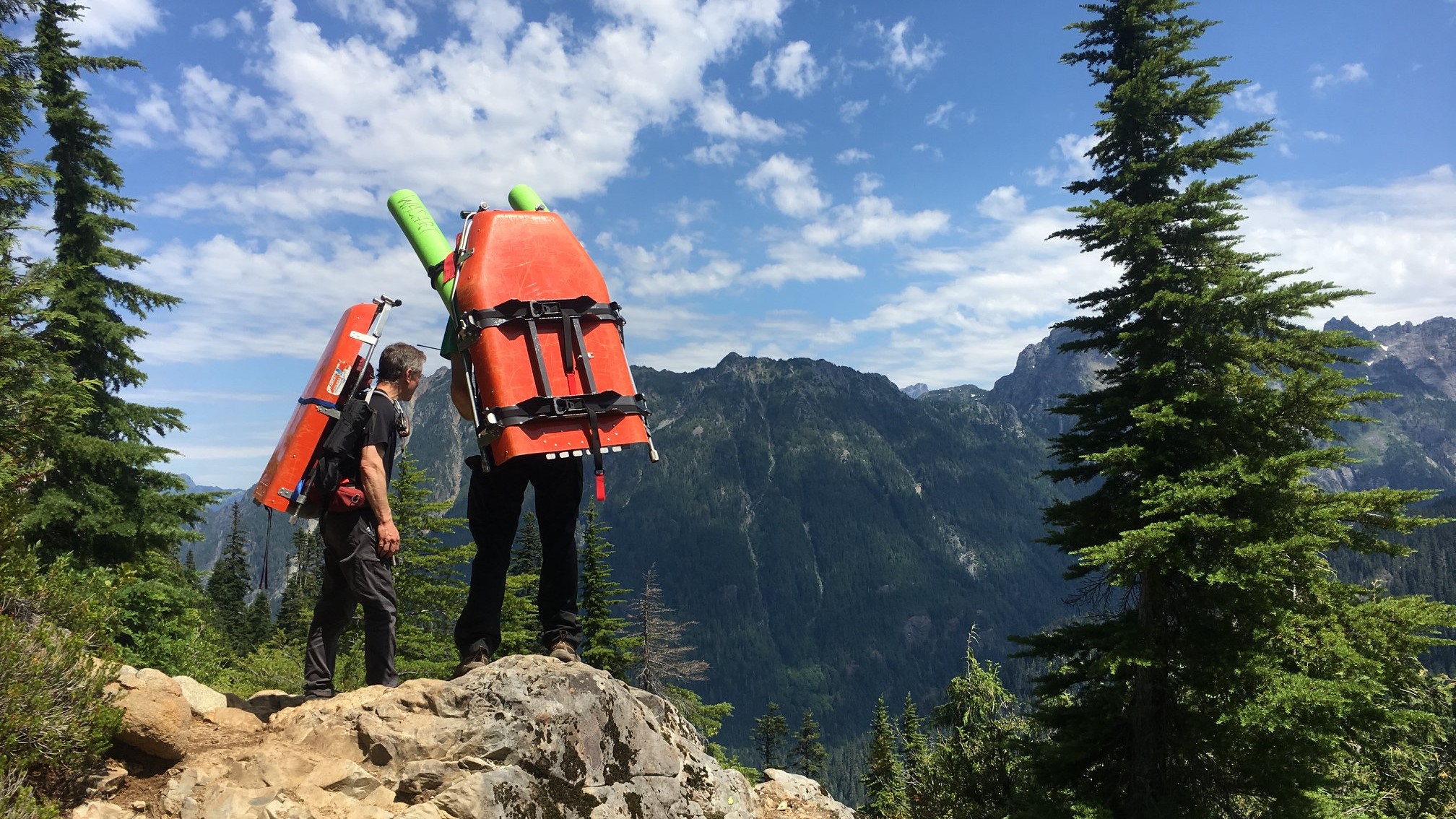 On a summer night, a 130-pound German shepherd with injured paws was unable to descend a remote trail in the North Cascades Range, and its owner didn’t know what to do. A third-party individual had triggered an SOS on their inReach® satellite communicator to report the situation, and staff at the Garmin International Emergency Response Coordination Center contacted the Snohomish County Sheriff’s Office to respond. The Sheriff’s Office knew that the Washington State Animal Response Team (WASART) was best equipped to assist with the urgent situation. WASART immediately began coordinating a response.

With an average of 4 to 5 animal rescues a month, the organization is a well-oiled machine. All responders in the field are credentialed as state emergency workers. Certain volunteers act as call coordinators from home, others respond to the scene with the necessary gear and set up a base camp, and those with additional training perform the rescue.

The rescuers knew the trail well as a trap for individuals who hike with their pets. Although strenuous, the terrain appears to be mild enough for animals until the last third, at which point it becomes very sharp and rocky.

The trail was also 25 miles from the nearest cellphone service, so the team used their inReach devices to communicate with the third-party individual who had triggered the SOS to get more information about the situation, as well as with the Snohomish Search and Rescue Deputy. They were concerned additional help would be needed to get the immobile dog beyond the rocky portion of the trail, but were able to communicate that need via two-way messaging on their inReach.

“That would have been a case in which otherwise one of us would have had to hike down, drive to cellphone service and get the message out, wait for more responders to come, and hike back in,” WASART Public Information Officer Michaela Eaves said. “Everybody probably would’ve been out there for more than 24 hours.”

It was a situation just like that which had inspired them to invest in inReach devices in the first place. The extent of a situation is not always clear, and sometimes there’s a need for more responders or different equipment. Now, they just use inReach devices to send updates and communicate needs when they’re in an area without cellphone services.

That night, WASART members were able to bandage the German shepherd’s paws enough that it could bear weight, and they used equipment to assist the dog down the slopes it was afraid of. Everybody, including the dog, made it back to safety, and WASART celebrated another happy ending.

Established in 2007, WASART — a nonprofit all-volunteer organization — is one of the country’s only small and large animal rescue team. Founders Gretchen McCallum and Greta Cook came up with the idea after hearing stories about pet owners putting themselves in harm’s way to save their animals during Hurricane Katrina. Since then, WASART has rescued dogs that have fallen off cliffs, hoisted horses that got stuck in mud, performed first aid to injured animals in the backcountry, pulled cows out of ravines and more.

Over and over again, the need for a technical animal rescue team has been validated as owners will often put themselves at risk to save their animal.

“In Washington in the last 10 years, there have been at least 3 deaths of people trying to rescue their own animals that have gotten into an inaccessible spot,” Eaves said. “So it may seem that it’s just about animals, but we are also preventing human deaths as well.”

There are about 130 WASART members, of which about 50 have the credentials to go out on a rescue, and many of whom are also members of search and rescue teams in the state of Washington.

Sometimes, they’re simply a resource for people wanting to know which authority to contact about the baby seal they’ve found stuck on a beach, or sometimes they consult with nonlocal fire departments attempting an animal rescue.

They also have a technical rescue team that trains monthly to be able to respond to more complicated situations.

“Regular search and rescue teams plan for about 440-pound loads, or about 2 people at the end of a rope,” Eaves said. “We have to plan for up to 2,200 pounds — for a large draft horse or something like that. We have to be able to build systems to support that.”

For example, they have a 26’ tripod that converts into a bipod, which can use a sling system to hoist a horse or other large animal.

Plus, unlike humans, animals don’t understand what’s happening to them during a rescue and can become dangerous. The technical response team is trained on how to deal with and handle different animals properly.

Eaves said the most common problem with taking dogs into the backcountry is that owners often think that they’re under verbal control, or that a leash will protect the animal from danger.

“Often that is the case, but sometimes it’s not, and they’ll see a squirrel and — especially if the dog has grown up in an urban environment and never had to worry about if there is ground underneath its feet — sometimes it will just run right off of a cliff or slip because it doesn’t have good traction,” she said.

In the event the animal does get injured, owners often forget to pack first aid equipment for their pet — or even pay attention to injuries.

“Check your pet’s paws if you’re hiking,” Eaves said. “In the summer, we respond to a lot of cuts or burns because dogs don’t really show pain until it’s too late. And then they just don’t want to walk anymore.”

Taking a first aid class with a wilderness component can help, too, so owners know how to deal with an injury — for themselves or their pets.

And, in the event that first aid isn’t enough, have an inReach device.

“Having an inReach is super helpful,” Eaves said. “That way, if something happens to your dog and you’re hiking alone, you don’t have to leave it while you go get help.”