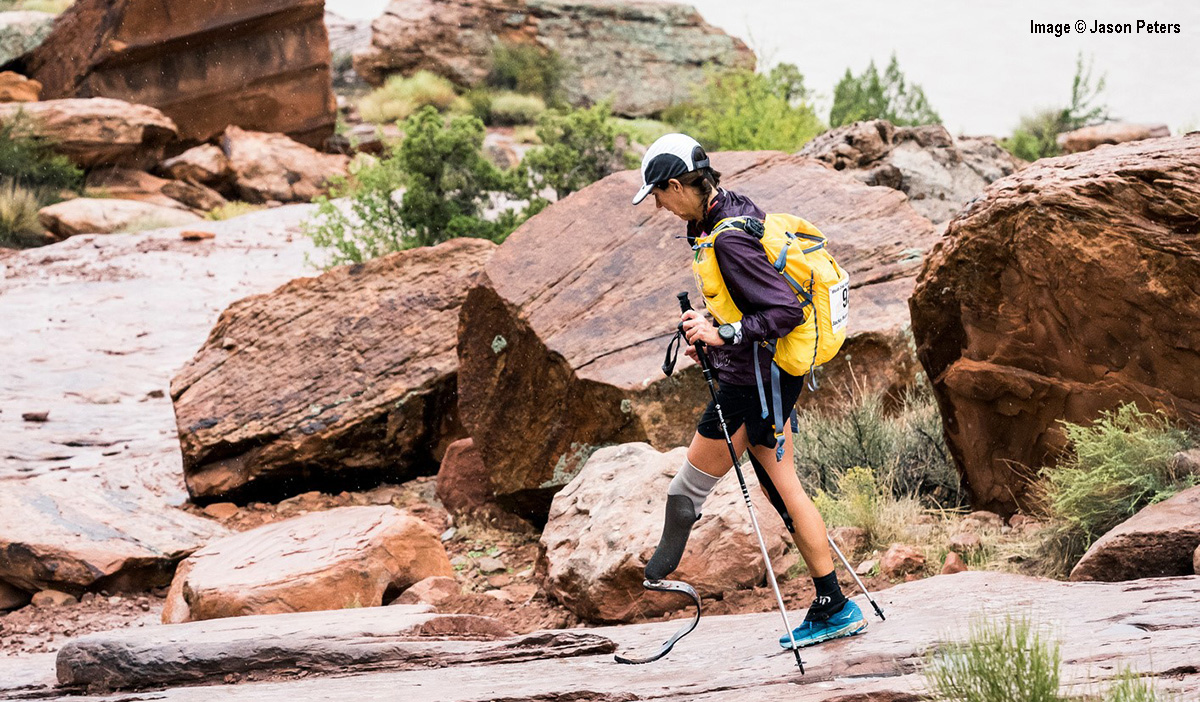 Runner, Amputee Gears up for Second Attempt at 240-mile Race

Jacky Hunt-Broersma was unable to complete the Moab 240 in 2021 — but that’s only fueling her desire to conquer the ultrarace in 2022.

Sometimes the success is in the trying. When Jacky Hunt-Broersma set out to run the Moab 240 — a 240-mile endurance footrace through the treacherous terrain surrounding Moab, Utah — in October 2021, she planned on finishing. Losing her leg to cancer at age 26 and gradually becoming not just a runner but also a world record-holding ultrarunner and Garmin ambassador, Hunt-Broersma is used to pushing through.

So when she realized she wasn’t going to make the cutoff time at the next aid station, she was admittedly disappointed. Runners are given 112 hours to complete the Moab 240, a time that’s difficult to achieve in the best of circumstances but becomes much harder in the rain, particularly when an athlete has to factor in a prosthetic that doesn’t grip well on slippery rocks and mud.

“Yes, it stings,” she wrote on her Instagram shortly after the race, “And yes I did cry, but I’m so incredibly grateful for this journey and having the courage to try even if I could fail.”

And while those were her own words, we wouldn’t call an attempt at tackling one of the most notorious ultraraces a failure — not by a long shot. Below, Hunt-Broersma walks Garmin through her first experience with the Moab 240, and what she’s up to as she waits to give it another shot in 2022.

How long did you spend training for the Moab 240 the first time? What did that training look like?

I had been training for Moab 240 since January 2021 (about 10 months). It is such a huge distance, and I wanted to make sure I had a good base. I did run a few other races in those 10 months to help me prepare, like the Umstead 100-miler and a few night races. Training varied from long training runs over the weekend, a lot of hills to get my vert to sometimes running miles on my treadmill with a weighted vest. It was constantly moving, and when I wasn’t running, I was cross training, swimming or cycling.

What challenges did you face during the Moab 240 that you think other participants also faced, and what challenges were specific to you as an amputee?

The weather definitely was against us during the race. On the first day and the day before, it had rained a lot, so the trails were very muddy and the rocks even more slick than usual. As an amputee, the terrain was really tricky to run, especially on the first day on the slick rocks. There was a lot of elevation gain on some really rocky terrain, and some parts of the trail washed away due to the rain, and you only had a small thin section for footing, which made it even harder with the blade.

Was there a certain point during the race when you realized you wouldn’t finish? What was that like?

I only realized that I wasn’t going to make the cutoff time about two miles from the aid station. I knew it was going to be really close but started picking up my pace. I missed a marking somewhere on the trail and had to backtrack, which isn’t great when you are so close to the cutoff time. The aid station was down in the valley and we had to make our way down. I could see it from the top of the mountain, and at that moment I looked at my watch and realized that I wasn’t going to make it. I still ran and gave it all I had, but I just didn’t make it.

As I crossed the checkpoint at the aid station, I immediately started crying because I knew I hadn’t made the cutoff. I was so full of emotions. I had worked so hard for this race, and I had done everything right. I just needed to be a little faster.

What are you up to now? Has training for the 2022 Moab 240 started yet? Any other events coming up before that?

I’m not someone that ever gives up. I am stubborn that way, so next up is a 24-hour race and then I’ve got a 72-hour race because I feel like all this training I did for Moab 240 can’t go to waste. It will be good preparation for Moab 240 in 2022. I am determined to be quicker on those technical trails and get that finisher buckle. I am also planning on running the Cocodona 250 in May, if I can get some funding together to pay for the race entry.

Don’t ever give up. Even if you fail, because as the saying goes, “You only fail if you didn’t learn anything.” I learned a lot during the race, not only about the race, but also about myself and how to deal with the disappointment of when a race doesn’t go your way. It was hard, and I was gutted, but the only way to get over that disappointment is to try again and book your next challenge and get back to running.