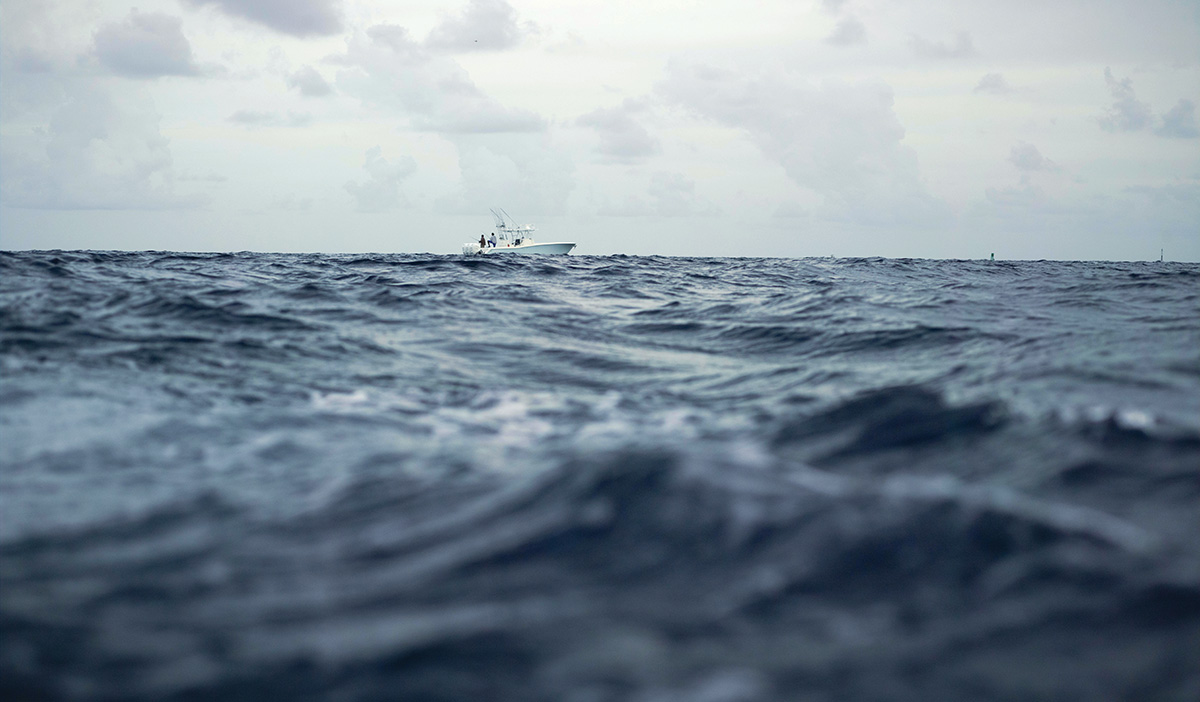 When an unmanned boat nearly collided with Andrew and Jack Sherman roughly 40 miles off the coast, the pair sprang into action.

Andrew Sherman and his son Jack were drift-bottom fishing 37 miles off the coast of North Carolina when Andrew looked up to see a boat 200 yards out heading straight toward their own 21’ Sea Hunt — and its course wasn’t changing.

At first the reaction was annoyance. “I was kinda like, ‘I can’t even believe this yahoo,’” Andrew said. “We get enough instances where people go by us at 25 to 50 yards, and you’re always like, ‘Why does this guy have to fish this close to us? We have a giant ocean.’”

As the boat continued its approach, annoyance graduated to legitimate concern. Jack scrambled to move their own boat in time to avoid the impending collision.

“There was this moment where I prayed the engine would start, because that’s how dead on he was,” Andrew said. Jack was able to start the engine and power forward, avoiding the newcomer by about 10’ to 15’. The father and son stood on the deck of their own boat yelling to whoever was driving the other one. But as it passed, they saw no one — not on deck, not in the cabin, and not checking any of the lines that were out. As it passed them by, doing about 8-10 knots, they realized that no one seemed to be driving at all. Nearly 40 miles off the coast, with no human in sight, it appeared to be a ghost boat.

It’s worth noting here that Andrew and Jack Sherman are no novices when it comes to boating. Andrew grew up in Miami, where he spent his summers helping his grandfather, a 500-ton master captain, and dedicated a considerable amount of time to helping out on charter boats and commercial boats. He’s since led many Boy Scouts on backpacking trips in the mountains of Virginia. Jack is currently enrolled in the Naval Academy. If a boat happens to be running rampant out in the middle of the ocean, the Sherman family is perhaps a fortuitous one to come across.

Realizing that their near collision was not, in fact, the result of some hapless mariner not understanding common courtesy but rather something more sinister, Andrew and Jack sprang into action. Jack took the wheel and pursued the driverless boat, while Andrew hit it with some blasts on the airhorn in case that prompted some sort of response from anyone — no luck.

“Then we went through this process where we talked about how we were going to do this, because I’d never brought my boat alongside another boat going that fast,” Andrew said. “We had a little argument about who was going to jump on board, and [Jack] told me I was an old man. So I said alright, three points of contact — do not let me see you do anything rash, young man. And then we just did it, and he was on board like that. It was like nothing.”

Once on board the other boat, Jack killed the engine and did a quick scan.

I was expecting to see somebody who was probably dead or passed out in the cuddy cabin,” he said. “But there was nobody. And I was like, ‘Oh, somebody fell overboard.’ We were thinking somebody died.”

He was able to find a wallet with an ID in the cabin and take down all the person’s information, and they called the Coast Guard and relayed the events of the day. It was at this point that the Coast Guard suggested looking on the mystery boat’s GPS to see if any information could be gleaned that way. The boat had a Garmin GPS marine system, and while Andrew said he hadn’t been familiar with Garmin units prior to that, it was easy to use, allowing him to figure it out quickly.

“I figured out that you could do all this touchscreen stuff, and he’d started a track when he left Wilmington Beach. I had a track all the way out. So, for the next 20 to 25 minutes, I literally went through point, point, point on this whole track all the way back to where there was a spot about a mile from us or so where he had laid down a point.”

Andrew relayed all the latitude and longitude points to the Coast Guard all the way back to the most recent waypoint, reasoning that the driver must’ve still been on that boat at that time. It had been following a straight line until then, when Andrew could see that it had gone rogue, hooking a hard left, making a full loop, coming back through its own line, and then wrapping out and turning again to encounter the Shermans as they were fishing.

“We got done and they were like, ‘OK, roger that, Captain,’ and I was waiting for them to say to go find them, but of course they can’t tell you to do that, so we were just like, ‘OK. We’ll go find him.’” The pair decided that Jack would stay on their own boat while Andrew took the stranger’s. Starting at the last known waypoint, Jack drove in ever-enlarging circles scanning the water, while Andrew went back to where the boat had looped off course into their original location and began to zigzag the area.

During this process, Jack found a pair of boots in the water.

“I thought we were looking for a body the whole time,” Andrew said. “And then this thing clicked in my mind: If I was treading water, I’d kick my boots off. Then I just thought to myself, if I fell off, I probably fell off on the straight line [in line with the waypoints and prior to where the boat had veered off course]. So I went back to the straight line, and I was going back to Jack, but then I figured the boat was drifting south, so that was where he would be drifting, too. So I went a little north, and a little south, and then 300-400 yards in the distance, I saw this big splash. I sped up, and then I saw his arm come up out of the water.”

Andrew pulled the man — Sascha Scheller— out of the water and onto the boat. They gave him some Gatorade and headed back to shore in both boats, making sure he was OK while learning what had happened at the same time.

The story was simple, really, and one that could happen to almost any boater on any given day. Sascha had gone to the side to relieve himself and simply fell overboard. He’d reached for the railing to grab it on the way down, but he missed. And that was it — his boat sped away without him, nearly 40 miles away from shore. At one point, he said, he’d seen another boat, but they’d missed him. He’d been in the water for two-and-a-half hours.

Had his boat not gone rogue, somehow completing its pattern of hard turns and loops with no one at the helm — had it not headed straight for the Shermans, or had the Shermans not been the skilled mariners that they are — had Sascha not tracked his waypoints on his Garmin marine GPS, or had the Garmin technology been less intuitive for an unfamiliar boater in a stressful situation — this story could’ve ended so much differently.

“To me, that’s divine intervention,” Andrew said. The three men have discussed theories again and again. Sascha says he’d been trolling five rods, while Andrew and Jack only found and reeled in four. Could the fifth, whose rigger was always a little loose, have caught a pile of weed or a fish that pulled out all the line, gave just enough tension to turn the boat around and then fallen off? But even so, what would have made the boat loop all the way around, loop back through its own path, head south and then turn west to end up nearly ramming into the Shermans? Jack, a math major at the Naval Academy, has run the numbers again and again, and it just doesn’t make sense.

“At some points I think we were within even half a mile of him,” Andrew said, “but it wasn’t until the end that we came onto him.”

The Coast Guard, which had deployed a ship from Wilmington, from Wrightsville beach, two helicopters from Elizabeth City and an entire cutter from Norfolkin the 35 minutes from when the Shermans contacted them to when they found Sascha, honored the father and son in a ceremony later on, presenting Jack with an award for a naval officer and Andrew with a civilian commendation.

“They took us into the battle room where they figured this out, and you could just see the Garmin track on the screen.”

Andrew Sherman has since upgraded his tech on his own boat.

“I bought a Garmin unit because I was so impressed with Sascha’s,” he said.

Interested in reading more about Scheller and the Shermans? Reader’s Digest profiled the day here. Ready to upgrade to marine GPS technology so easy to use it saved a man’s life? Shop Garmin products here.