Inspirational stories and videos are frequently shared on social media; email blasted to coworkers, friends and family, or picked up by local news stations and shared with the community. The Human Society in Silicon Valley created a video for their Mutual Rescue initiative, aiming to change the way people see animal welfare. This particular story took off and received over 27 million views on Facebook and was also featured on BuzzFeed. The video told the story of the bond that formed between Eric O’Grey and adoptive dog named Peety, who saved each other’s lives through fitness and friendship.

Mutual Rescue™ is a trademark of Humane Society Silicon Valley.

Six years ago, O’Grey weighed about 340 pounds and as a last ditch effort to avoid bariatric surgery, he consulted with a naturopathic doctor who recommended he adopt a shelter dog and take on a plant based diet. The purpose of the shelter dog was to force O’Grey to get outside and begin exercising by walking him for half an hour, twice a day.

“I had never owned a pet before, and was reluctant about getting a dog,” said O’Grey. “I asked my doctor if I could get a cat instead and she replied that the purpose of the dog was to get me outside and back into life.”

At first, O’Grey explains that he and his new dog Peety were suspicious of each other. “I didn’t know what to do with him, and he wasn’t quite sure about me,” said O’Grey. For the first two days, Peety keps his distance and slept in another room of the house. But on the third night, he hopped onto O’Grey’s bed and thereafter they became best friends. They both started walking every day and started to lose weight. With the weight loss, they both experienced an increase in energy and confidence, which in turn prompted O’Grey to start his running journey.

“I tried running and was told by a friend that if I kept at it, I eventually wouldn’t hate it,” said O’Grey. “The first time in my life I ever ran more than two miles was on the famous ‘Olympian’ track at San Jose State and two months later I ran my first half marathon.” 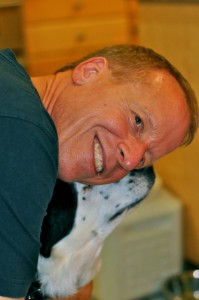 O’Grey said he began to feel like Superman, especially as his health improved. He said what was most remarkable was the realization that the optimal weight and increased energy he achieved through moderate exercise and a plant-based diet was how “normal” was intended to feel. O’Grey utilizes the features of the Forerunner 920XT to help him track his 30-50 mile training weeks. “I now couldn’t live without the Bluetooth connectivity to my smartphone,” said O’Grey. “The 920XT is by far the best running watch on the market in my opinion, especially because it includes embedded GPS technology.”

O’Grey encourages those who are thinking about getting a pet to adopt from a local humane society or shelter. If you can’t or don’t have the time to adopt, he wants readers to know that donations and volunteer efforts associated with the local organizations are what save the lives of animals.  “If you are in declining health and sitting at home alone and don’t know what steps to take to become the awesome person that you’ve always wanted to be, start by adopting a shelter dog to save both of your lives,” said O’Grey.  “A rescue dog will know that you saved his or her life, and will look up to you as the greatest person in the world every day for the rest of his or her life.”

O’Grey is currently training for the Rock n Roll Seattle marathon and continues to beat yesterday each and every morning so that the buzz of self-achievement he feels from his daily run stays with him all day. Check out the full-length video on the Human Society Silicon Valley website.