The Garmin IQ program came to an end at a ceremony held at Garmin’s Olathe headquarters. Garmin IQ is a summertime and after-school educational program where high school students learn Monkey C, the programming language Garmin uses to create applications, widgets, watch faces and data fields on many of our devices, including vívoactive, vívosmart and fēnix 3. The students received an inside look at how a Garmin device is created, designed, developed and brought to market.

During four summer sessions, the students received behind-the-scenes access to Garmin global headquarters and learned about our diverse design, development, engineering, production and marketing teams. STEM coordinator Sunita Lavin provided a tour of the Garmin campus, which showed the engineering and manufacturing facilities as well as let the students fly the aviation flight simulator and practice distracted driving using a driving simulator in the automotive OEM department. 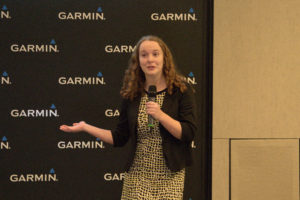 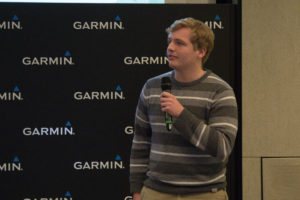 The winning project were as follows

Third Place – Sunrise by Holden Essex. A watch face that displayed the sun passing through the sky as the day goes by

Second Place – Return Home by Ryan Pope. This app uses the device’s GPS to find your current location, and the Google Maps API to get a route back to your house.

First Place – Disc Golf by Jake Herman. This app uses the device GPS to compute the distance from where you threw your disc to where it landed, and keeps track of the distance of your longest throw.

The three winners received gift cards, and all the participants received certificates presented by Vice President of Engineering Mike Wiegers as well as complimentary copies of Wearable Programming for the Active Lifestyle. 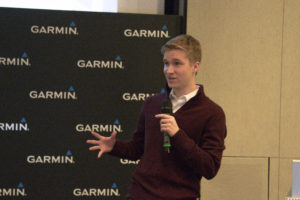 In the fall the students were given five lab sessions teaching them Connect IQ, the app platform for Garmin wearables and bike computers. The sessions went over the basics of programming up to MVC and object oriented programming. All of the students were provided a Garmin vívoactive to use to test their creations. After learning the ins and outs of creating apps for wearable devices, the students all worked independently on their own final project. In a final presentation, hosted by Garmin IQ coordinator Kurt Iverson, they presented their projects and were judged by the Connect IQ team. 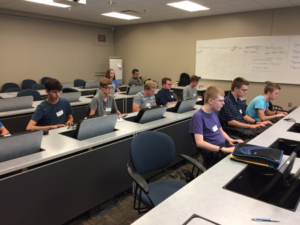 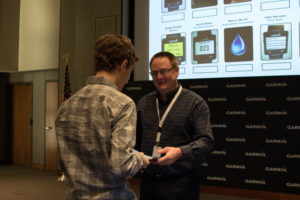