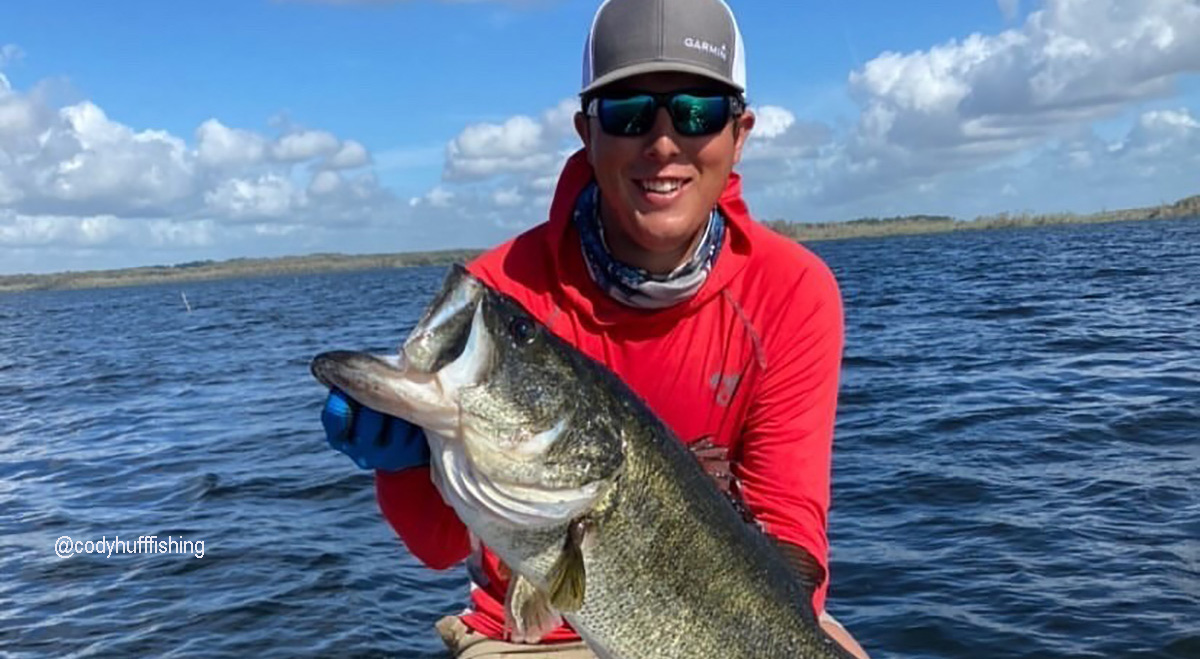 Hailing from Ava, Missouri, a town dubbed on its website as the “Treasure of the Ozarks,” professional angler Cody Huff does not have a flair for the dramatics. Referring to his 2020 Toyota Series victories at Table Rock and Toledo Bend and his various top-10 placements while on the Abu Garcia College Fishing circuit for Bethel University, Huff says only that he’s had “some success.”

“I’ve been super blessed throughout my college career,” says Huff. “I got lucky enough to have some success while I was still in college and wasn’t doing it full time to give me the confidence to go ahead and take that next step.” Huff is in the midst of his first full-time professional year, and the season is about to heat up with tournaments and circuit events. But before he hit the road, he carved out some time to chat with Garmin about Panoptix LiveScope™, the sonar technology to which he credits his wins.

“A lot of people say it, but I honestly would not have won either of the tournaments without LiveScope,” Huff says. “I never weighed in a fish at either tournament that I didn’t watch bite my bait, as crazy as that sounds.”

The sonar tech allows you to see easy-to-interpret live scanning sonar images of fish swimming nearby — and you can even see your lure as you retrieve it or distinguish between different types of fish. You can adjust your transducer to see around your boat, directly below your boat or even get an overhead view of what’s in front of your boat in shallow water for up to 200’, and the insights it allows into fish habits are like nothing Huff has ever seen.

“It’s just so special; it’s hard to put into words,” he says. “Everybody spent their lives trying to learn fish habits and natural patterns on how they travel and how they move. And that’s good to know — you need to know that. But since LiveScope came out, it’s completely changed what I think about fish and how they actually live. I’ve learned more since I got it than I ever thought I would know my entire life.”

The sonar tech, he says, has allowed him to learn exactly what certain kinds of fish like and whether or not he’s going to be successful on any given day.

“When you see them on there, a little sign doesn’t pop up that says ‘This is a bass,’ or ‘This is a catfish,’ but you learn how they position to where you can tell the species, and you can tell exactly what they are before you ever cast to them,” Huff says. “It’s so weird. They live in some of the funniest places that you would never expect them to be, and it looks like they’re there for no reason. You know immediately if you’re throwing the right lure, because they either react to it and bite it, or you can tell it’s not exactly what they want, and you can change things up.”

The insights offered by LiveScope, he says, are so valuable that’s it’s turned the fishing industry inside out.

“There’s been a lot of chaos in the industry since LiveScope came out, because Garmin was so far ahead of other brands that didn’t have anything to compete with it, so it caused problems,” he says. “It’s not very often that you see a product that is so far ahead of everybody else that, no matter what, every single person out there knows they have to have it. I would be so lost without it. I don’t know what I would even do — as sad as that sounds. I really, really rely on it. It’s helped me to make a lot of money — more money than I ever would have.”

When asked about tips for those just now installing LiveScope on their boats, Huff has three:

“This technology has allowed me to fish for bass that have never been fished for before,” says Huff. “That’s the deal. That’s the main focus here.”

To start searching for your own monster bass — or any other fish that catches your fancy — click here.