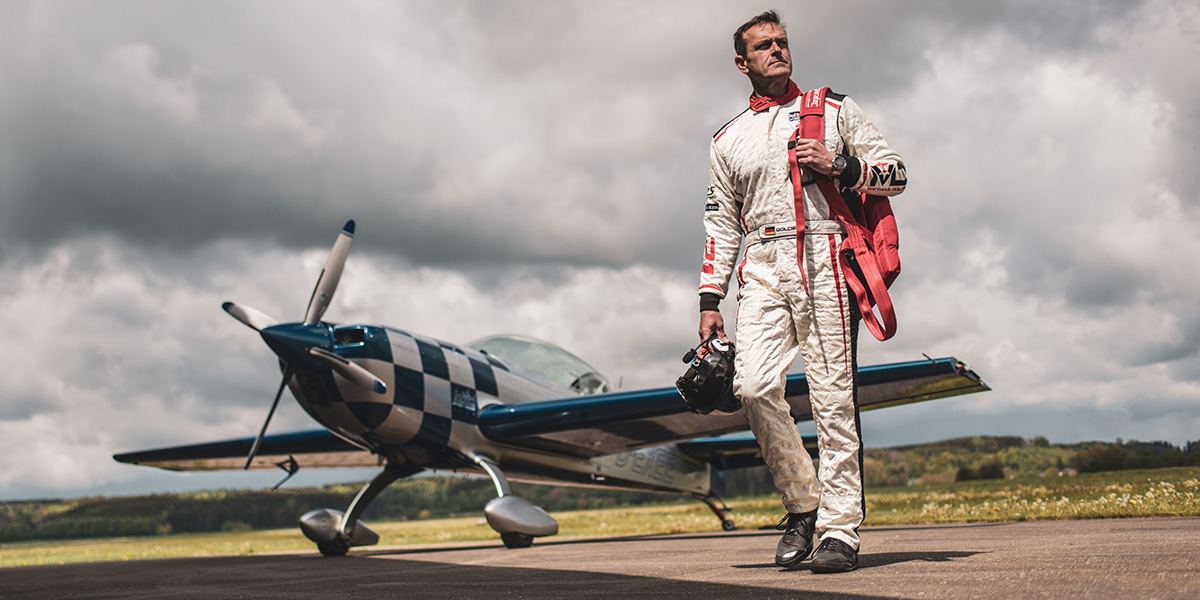 The Flight to Perfection

Cuban eight. Flick roll. Outside loop. When Matthias talks about aerobatics you can clearly hear his fascination for the sport. It’s his profession and his passion. For him, it has all the things he loves the most about flying as a pilot: speed, precision and skill.

“It’s the passion that gives you wings,” Matthias explains. “Plus, all the hard work I put in day after day, that is what helped me to launch my career. It all began at the local airfield when I was 5 years old. At the age of 10 I built my first model airplanes and four years later I took off for my first solo flight in a glider.” He remembers the emotions to this day and a hobby turned into a vocation. “I took part in an ultralight competition when I was 17 and won straight away. In addition to winning pride and passion, I felt that this is my future, my life.” He was a member of the national team at an early age, took part in European and World Championships and became Germany’s youngest flight instructor.

The combination of his passion for flying, obsession for perfection and being competitive from a young age made him fit perfectly into the world of air racing. A dream came true in 2009 when he took part in the Red Bull Air Race World Championship – the Formula 1 of the skies. “Only the best pilots qualify. I was ‘Best Rookie of the Year’. But even when you get there, you have to work hard every day, stay focused, learn from your setbacks and keep on improving.” The path to the winner’s rostrum was indeed long and hard, and it took a lot of resilience, determination and focus to get there. It all paid off in 2016, when he became the first and only German pilot ever to win this ultimate aviation sporting and speed spectacle. “It was amazing being one of the elite Air Race pilots, those madcap aviation enthusiasts, traveling the world, meeting new people and experiencing new cultures. Of course, the race itself is extreme. You have to fly your plane at speeds of up to 230 MPH just a few feet above the ground at the same time as navigating an obstacle course. It’s like trying to park a car in a garage at 250 MPH,” he laughs. “It isn’t just the adrenaline rush from flying at that speed that makes it so fascinating, but also the precision piloting of the plane. And you have to be in top mental and physical form.”

Technology obviously plays a crucial role in aviation. “When you’re in the air, you can still hear, see and feel. But sometimes the senses get confused. Especially when you’re upside down. That’s when I use the instruments for orientation. The plane’s look is also important to me. Both as a whole, and the details in the cockpit. That’s why my MARQ® Aviator is perfect for me. And it’s perfect in itself. Precision, perfection, design and style. It looks like an aircraft instrument. It’s kind of crazy how many things you can do with a tool watch these days: it gives me access to global aviator’s maps, it has a pre-flight check, routine check during the flight and even a direct-to navigation key and an off-course indicator. Pilots have an affinity with watches and to me the MARQ is the best fusion of aviation and everyday tools. In this way I can stay safe and efficient, and I have features like mails, alerts, Garmin Pay™, etc. on my wrist.”

Like everyone else, Matthias has been longing to travel again. “With a bag over my shoulder and my MARQ Aviator on my wrist. An alarm at 4 a.m. in the morning. Still pitch black. Clear, cold and tangy air. Silence. Isolation. Start. Take-off. At one with nature and the skies. Then, the miracle of dawn. A pink hue over the horizon. The fascination of flying at its finest,” he concluded with a content smile.