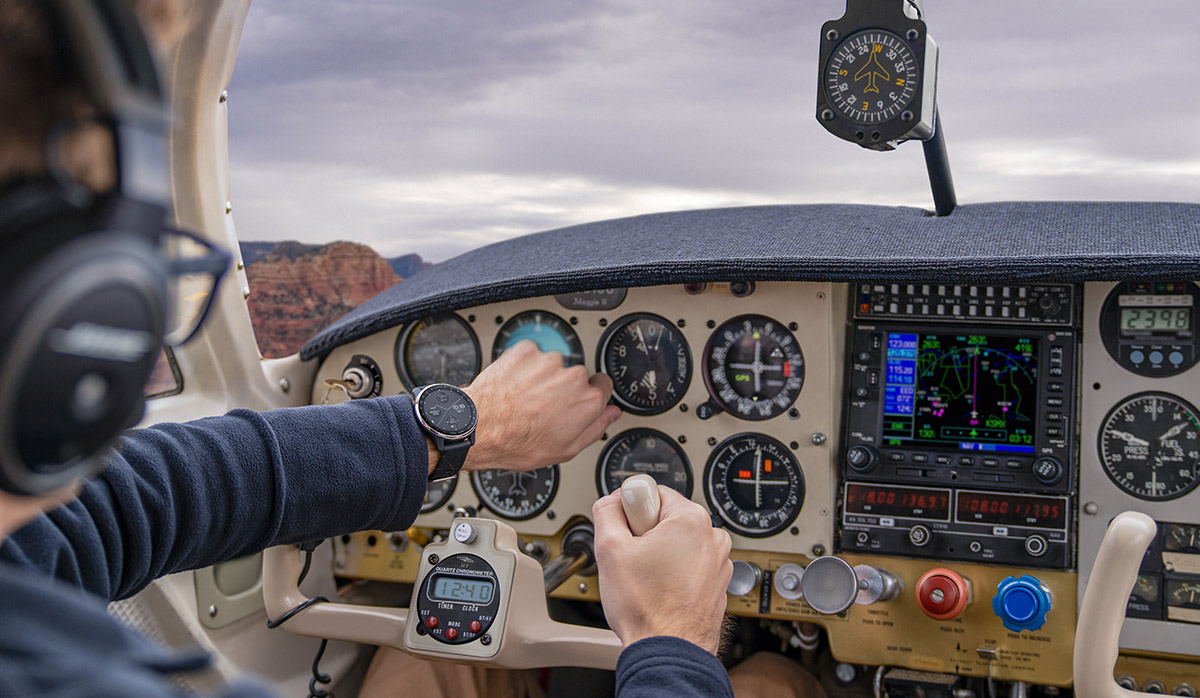 “The watch actually alerted me before the plane did. We never declared an emergency thanks to the watch.”

Pilot Ryan Cianciolo says what originally attracted him to the Garmin D2™ Air X10 smartwatch was the battery life — and then less than a week after purchasing it, it notified him of a potentially dangerous situation mid-flight.

On April 23, Cianciolo was flying an Embraer E145 when he wore his D2 Air X10 on its inaugural flight.

“I hadn’t even had the watch for a week,” he said. “I was flying from Charlotte to Ohio, and we had just leveled off at 34,000 feet, and we were maybe 100 miles from Charlotte heading north. Before getting onto the plane, I had set my watch for the low altitude oxygen level to be 8,000 feet and any other altitude for 10,000 feet; the plane normally goes up to 8,000 in the cabin automatically. Anything from 8,000 feet to 10,000 feet is amber and it flashes, and when it hits 10,000 feet that’s an emergency.”

Commercial airplanes typically fly at altitudes of about 34,000 feet, but cabins are pressurized so that oxygen levels are equivalent to what they would be at 8,000 feet or lower. The higher the pressure altitude in the cabin climbs, the harder it becomes for the pilot — and in this case, the more than 50 passengers on board — to get an adequate amount of oxygen while breathing.

“We had just leveled off, and my watch started vibrating,” said Cianciolo. “I was like, ‘that’s weird.’ I was showing my first officer. Sure enough, I looked at the EICAS pressurization page, and it showed 8,100 feet amber and climbing. So we quickly requested to get down to 10,000 feet with ATC, and we started our descent immediately. I was able to reverse the trend at 9,100 feet. The watch actually alerted me before the plane did. We never declared an emergency thanks to the watch.”

Cianciolo, who had originally been considering a smartwatch not specifically built for pilots, wears his D2 Air X10 around the clock now.

“This watch is definitely a must-have, especially after the event,” he said. “After the fact, I’ve been playing with it more — I even sleep with it.” The D2 Air X10, like most Garmin smartwatches, boasts a long list of features, and Cianciolo is taking full advantage.

“I use everything, really. I actually just got back from a trip up in Maine, so I’ve been using a lot of the apps lately, such as hiking and running. I use it for weather a lot — if I want to look at weather1 or different airport information, I’ll use that. And of course it links to my phone. I also like the hydration app tracking to monitor how much water I’m drinking, because sometimes I forget to drink and stay hydrated.”

He nods to the altimeter app to view barometric pressure and other details, as well as more health-oriented features such as calorie tracking2, stress level tracking and the health snapshot that shows a real-time glimpse at the user’s current health and fitness status.

“I’m very amazed by the accuracy and the amount of stuff this watch can do,” he said. “It’s amazing. It’s better than any watch out there.”

The Bluetooth word mark and logos are registered trademarks owned by Bluetooth SIG, Inc. and any use of such marks by Garmin is under license.