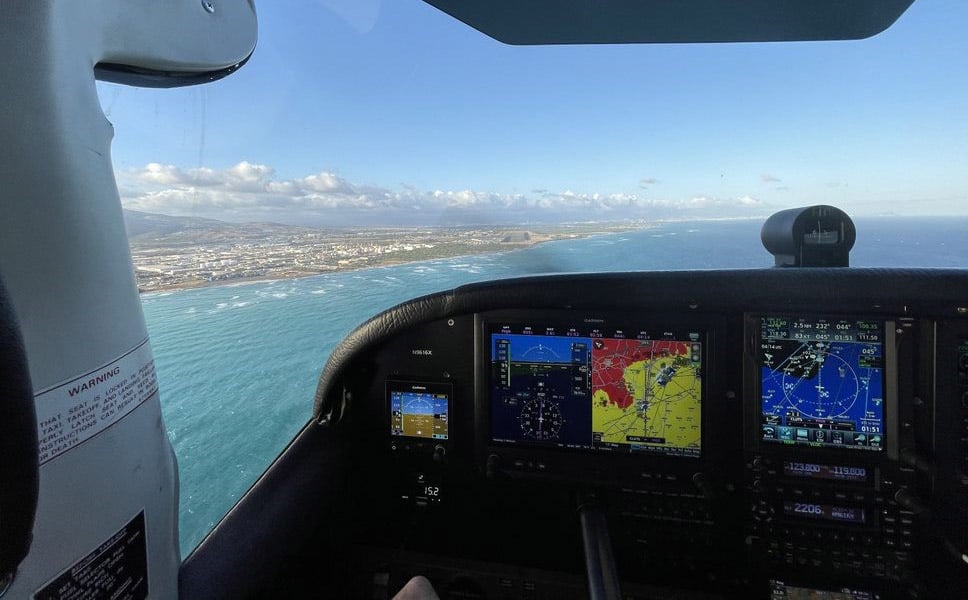 Flying from California to Hawaii in a Garmin-equipped Cessna 210

Jim Barrett set a goal early in his career: relocate to Hawaii. After years of traveling the country as an advertising photographer and cinematographer for the aviation, marine and auto industries, the time had finally arrived to fulfill his dream. But one big hurdle stood between him and his goal — he needed to figure out how to get “Elizabeth” to Hawaii. “Elizabeth” is a 1962 Cessna 210B; she served him as a “pickup truck” for work, hauling him and his camera gear around the country throughout his career.

As Barrett put it, “I wasn’t gonna box [Elizabeth] up and ship her, and I wasn’t gonna hire a ferry pilot to do it.” There was only one option: to tackle the 2,500-mile transpacific flight himself.

After upgrading the aircraft with required equipment, along with modern Garmin avionics including dual Garmin G3X Touch™ flight displays, a GTN™ 750 navigator and more, Barrett was ready to embark on the journey.

Weather is a primary consideration for any flight. The unpredictability and unforgiving nature of oceanic weather can make transoceanic flights much more challenging. A clear forecast and favorable winds would be key for Barrett in his single-engine piston aircraft. In early June, promising weather finally emerged, providing a window for him to launch from Watsonville, California, on a direct route to Oahu, Hawaii.

The modern Garmin tech he invested in before the trip delivered valuable flight information throughout the flight. The fuel data displayed on the G3X Touch and GTN series navigator provided an added level of confidence.

“I had the computing power of the G3X Touch and the GTN 750 … they provided fuel range rings that showed where my range ultimately extended and my 45-minute reserve.”

Prior to the transpacific flight, Barrett was required to equip his Cessna 210 with a high frequency (HF) radio to provide position reports for air traffic control. In addition to the HF radio, he carried a satellite phone in the cockpit, but his Garmin inReach satellite communicator1 proved to be the most effective tool for communicating. Leading up to the trip, he had coordinated with air traffic control (ATC) and a friend to ensure his position reports would reach not only ATC, but also his loved ones if his HF radio did not work properly.

“Ten minutes before my hourly check-in I would ping my friend with the inReach, which would give him my position, and I would tell him what my time is to the next fix, my fuel remaining … then he would physically call San Francisco Radio ATC and make the check-in for me.”

As he predicted, the HF radio was often ineffective for making position reports, and there was too much noise in the cockpit to use the satellite phone. The inReach was his best option.

“In the end, I used the inReach for every position report and every compulsory report required during the 15-hour flight … there is no way that I would fly in Hawaii or make that [transpacific] trip without the inReach,” Barrett noted.

Since settling into Hawaii, the inReach has continued to be useful outside of the cockpit.

“We love to hike, so I take the inReach with me when I’m hiking in areas where there is no cellular coverage,” he added.

Learn more about our inReach series, including the new inReach® Mini 2, along with our GTN Xi series navigators and G3X Touch flight displays available for select type-certified and experimental aircraft by visiting Garmin.com. To learn more about Barrett’s expanding photography business, visit JimBarrettPhotography.com.

1Active satellite subscription required. Some jurisdictions regulate or prohibit the use of satellite communication devices. It is the responsibility of the user to know and follow all applicable laws in the jurisdictions where the device is intended to be used.