What do you get by extending your squit?

It’s the law. On January 1, 2020, all of us who fly in regulated airspace where a Mode C transponder is now required will need to have an FAA-approved ADS-B system onboard. What’s more, your transponder can be a key element in meeting the new avionics requirements.


ADS-B (which is short for Automatic Dependent Surveillance-Broadcast) technology will be replacing conventional radar-based surveillance as the primary method for identifying and tracking aircraft in U.S. airspace. Using the ADS-B datalink, each airplane will automatically transmit its precise position, its velocity (both vertically and horizontally), as well as its altitude and other information to controllers and other nearby aircraft. Each plane will need a WAAS-capable GPS receiver to provide the high-integrity location and flight path data for ADS-B networking.


Under the FAA’s new rules, only ADS-B “Out” transmission capability is required. There is no mandate for ADS-B “In.” However, this optional “In” capability — which receives the tracking data for display in the cockpit — should be a popular upgrade, since it can clearly enhance situational awareness by giving pilots a view of the same basic traffic data that ground controllers are monitoring on their scopes. Additional FAA inducements for adding ADS-B “In” include free datalink weather and various other flight information services.


The FAA has already begun to implement the nationwide infrastructure of ground stations needed to support ADS-B. By 2013, the FAA expects to have some 790 ground stations, linked through 4 data-control centers, providing full ADS-B coverage for more than 95 percent of the airspace over the contiguous United States.


On January 1, 2020, all of us who fly in regulated airspace where a Mode C transponder is now required will need to have an FAA-approved ADS-B system onboard.

Even though it’s called a “Universal Access” transceiver, the 978 MHz UAT is actually less universal that the 1090 MHz “ES” transponder in terms of where it can fly and what airspace it can use.


For example, in its criteria for ADS-B “Out” compliance, the FAA will require 1090 ES transponders for aircraft operating higher than 18,000 ft MSL — while UAT is limited to aircraft that will operate no higher than 17,999 ft MSL. So far, no country except the U.S. has accepted the 978 MHz UAT format for their ADS-B datalinks. Consequently, pilots who want to fly outside the U.S. — or operate at or above FL180 — will need the 1090 ES transponder for ADS-B “Out”. Since the FAA has decided to retain its Mode C and Mode S transponder requirements for flight in regulated airspace (to provide a secondary radar backup to ADS-B, as well as communicate with other aircraft that have traffic warning systems), the 1090 ES solution can satisfy both the ADS-B “Out” and functioning transponder requirement with the same piece of equipment. 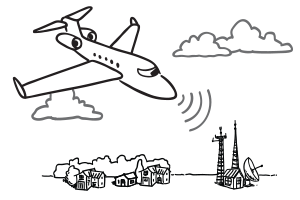 What is a “squitter” anyway?

If you’ve ever flown with a Mode S transponder, you’ve already done your fair share of “squittering.” By definition, the word “squitter” refers to a periodic burst or broadcast of aircraft-tracking data that is transmitted periodically by a Mode S transponder without interrogation from controller’s radar. Mode S ( which stands for mode “select”) technology was first developed in the mid-1970s as a way of using existing ground-based secondary surveillance radar (or SSR) to track onboard transponders more precisely and more efficiently — while reducing the number of interrogations required to identify and follow aircraft on the controller’s radar scope.


To greatly oversimplify the terminology, a “squawk” is a response a transponder makes to an ATC interrogation, while a “squit” is a transmission format that routinely sends aircraft ID and positional information without being interrogated. By reducing the need for back-and-forth interrogation/response over the air, the Mode S squitter works to minimize transmitted “chatter” in the system — and, thus, increase its target-handling capacity.

Under the current Mode S setup, a standard transponder squit only sends the most basic aircraft identification, system status and pressure altitude information — which ATC’s ground computers must correlate with radar tracking information to derive aircraft position, direction of flight, airborne velocity, vertical climb/descent, and so on.


Under the new ADS-B concept, each aircraft’s approved GPS navigation system will generate all of this data, and then transmit it at least once per second by means of an “extended squitter” — allowing ground controllers and other aircraft in the vicinity to track each airplane’s flight path with much greater precision and accuracy.

In fact, some 49 individual parameters can be sent over the extended squitter, compared to three for Mode C and seven for basic non-extended Mode S.

The “extended squitter” ES format is capable of carrying much more data than the basic “short squit” Mode S version. In fact, some 49 individual parameters can be sent over the extended squitter, compared to three for Mode C and seven for basic non-extended Mode S. (Note: The 978 MHz UAT “Out” has the same basic data transmission elements as ES — however, it uses a different frequency in the radio spectrum to broadcast the information.)


Eventually, when the transition to ADS-B is complete, the higher capacity ES datalink will allow controllers to see not only what each aircraft is doing, but what it intends to do. The route you have entered into your navigation system will be broadcast on the ES so controllers and other pilots can see where you intend to fly. With this futuristic technology, the clairvoyant mind-reading that some pilots seem to expect from ATC controllers won’t seem so unrealistic after all.


This briefing is provided for information purposes only, and should not be relied upon as legal advice.