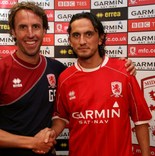 The toughest month of the season (October) has seen Middlesbrough up against Man City, Chelsea and Manchester United and the tests didn’t stop there as they welcomed Tottenham to the Riverside for the first fixture of November. A hard fought 1-1 draw was enough to move Boro up one place in the table as others faltered.

Gareth Southgate and his men head straight into the crunch Holiday season in need of a boost to propel them up the table. So this weekend’s trip to Bolton Wanderers is already a huge six pointer and could be the boost the team have been striving for!!

With key players also returning to full fitness, it’s looking like Gareth will have his defence back to full strength with Robert Huth and Emanuel Pogatetz coming through the Reserve fixture with Manchester United this week.