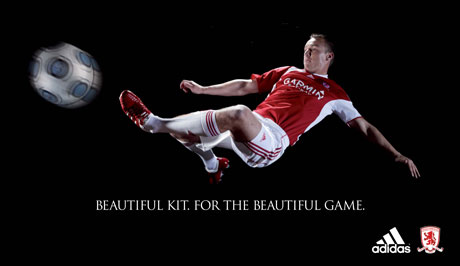 Here is the stunning new adidas home strip Boro will wear as they look to bounce back to the Premier League at the first attempt.  Modelled by star defenders David Wheater and Tony McMahon, the 2009-10 strip features a white sash on both sides of a red shirt plus the famous adidas stripes down both shoulders.

It will be the first time for a decade that Boro have worn white shorts, while white socks make a comeback for the first time since the unforgettable 1995-96 season when Juninho made his first appearance at the new Riverside Stadium.

The team also wore white socks when Boro last carried adidas branding back in 1982-83.
Shirts are available in a choice of short-sleeved and long-sleeved for the first time in many years.
Boro are confident the kit’s design, feel and technology will prove a big hit with fans.

The shirts feature adidas Climacool fabric, an integrated system of technologies to regulate the wearer’s body temperature, take sweat away from the body and allow air to circulate close to the skin.
Terry Boland, Boro’s Head of Retail, said: “We are sure fans will be delighted not only with the design that adidas have produced but by the outstanding quality of the kit too”

The new kit will be available exclusively to Season Card holders from Wednesday July 1 – but pre-orders can be made by all supporters from tomorrow (June 19) in both MFC Official stores and on-line via www.mfcofficialdirect.co.uk.

Supporters who pre-order from either club store will be able to take advantage of a priority collection service at both outlets.

The new-look, all-black goalkeeper’s kit, modelled here by Brad Jones, is launched on July 1 and is also available for pre-order.