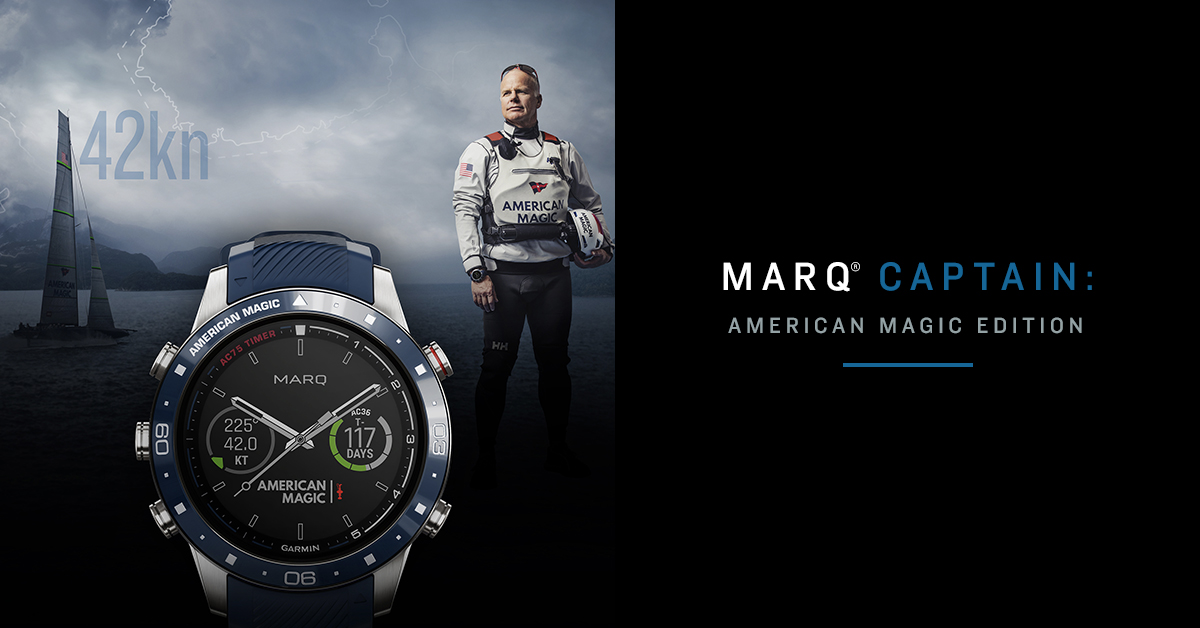 Special-edition watch honours the world-class sailing crew and the Garmin technology used to train and perform on-and-off the water.

Schaffhausen, Switzerland, May 12, 2020/Business Wire — Garmin International, Inc., a unit of Garmin Ltd. (NASDAQ: GRMN), today announced the MARQ Captain: American Magic Edition, a special-edition commemorative watch developed alongside the world-renowned American Magic sailing team. The MARQ Captain: American Magic Edition is a modern tool watch at the helm of technology, athletic performance and tactical execution. Created with the team in preparation for the prestigious 36th America’s Cup presented by PRADA, this watch combines the tradition and innovation that’s long been a part of the sport.

The MARQ Captain: American Magic Edition is designed to celebrate the heritage of the team with a navy blue silicone strap with red keepers, engraved with the American Magic name on the bezel and specialised watch faces with the American Magic logo. The watch comes with two exclusively designed sailing-focused watch faces. The analog watch face prominently features a “T-minus” countdown to race day in Auckland while the digital watch face features a silhouette of DEFIANT, the team’s new foiling monohull sailboat. New sailing features include a preloaded Sail Grinding activity, which allows sailors to increase their athletic performance both onshore and offshore.

“We are honored to be a part of the legacy of American Magic and its challenge for the America’s Cup, the pinnacle of sailing and the oldest trophy in international sports,” said Dan Bartel, Garmin vice president of global consumer sales. “We are confident our watches will give the team the tools they need as they compete for the trophy, and we’re excited to be a part of their success on the water.”

To compete in the America’s Cup, it is crucial that each athlete be in top physical shape. The MARQ Captain: American Magic Edition includes three workouts designed by American Magic trainers. Users can select between the following workouts: Race Simulation, Fitness Test and Intervals to experience a wide range of options used by the team in their training. The watch includes multiple sensors that monitor overall health and wellness, such as built-in wrist-based heart rate and a Pulse Oximeter1. Post-activity, users can view advanced training metrics which include running dynamics2, heat-and altitude-adjusted VO2 max, plus a recovery advisor to ensure the body is getting the maximum training benefits and to reduce injury risk.

“Our athletes meet the physical demands of racing by working even harder in the gym,” said Baden Cashmore, American Magic’s Injury Prevention Specialist and Trainer. “Through tracking metrics such heart rate and training load on the water and in the gym, we are able to adjust training volume in order to optimise performance. Garmin wearables and technology allows me to track each athlete’s workload on and off the water, giving me the information to modify their program accordingly.”

Built to withstand the elements, the MARQ Captain: American Magic Edition includes an internal, rechargeable lithium battery that provides up to 12 days of battery life in smartwatch mode, 28 hours in GPS mode, 48 hours in UltraTrac™ mode and 9 hours in GPS mode with music. Available now, the MARQ Captain: American Magic Edition has a suggested retail price of £1,599.99.

The MARQ Captain: American Magic Edition is the latest innovation from Garmin’s MARQ series of watches, an outward expression of our consumers’ aspirations, the MARQ series combines beautiful design with cutting edge materials and technology.

For more than 30 years, Garmin has pioneered new GPS navigation and wireless devices and applications that are designed for people who live an active lifestyle. Garmin serves five primary business units, including automotive, aviation, fitness, marine, and outdoor recreation. For more information, visit Garmin’s virtual pressroom at garmin.com/newsroom or follow us at twitter.com/garminuk, facebook.com/garmin or instagram.com/garminuk.

2 This is not a medical device and is not intended for use in the diagnosis or monitoring of any medical condition; see Garmin.com/ataccuracy. Pulse Ox not available in all countries.

3 Active satellite subscription required – NOTICE: Some jurisdictions regulate or prohibit the use of satellite communications devices. It is the responsibility of the user to know and follow all applicable laws in the jurisdictions where the device is intended to be used.

Formed in October 2017 by Bella Mente Racing, Quantum Racing and the New York Yacht Club, American Magic represents a joint vision to win the America’s Cup, the highest prize in sailing and the oldest trophy in international sports. American Magic brings together two highly successful racing programs with one of the foremost yacht clubs in the world, united by a campaign to win back the Cup, reconnect the American sailing base with the premier event in the sport and elevate the quality of competitive sailing in the United States. The name, American Magic, is a nod to the New York Yacht Club’s storied America’s Cup history; a combination of the boat the trophy is named for, and the first boat to defend it. American Magic will develop and support a team that will participate in the America’s Cup competition, the Prada Cup and the America’s Cup World Series events that lead up to both. American Magic’s Official Innovation Partner is Airbus. Other partnerships include Official Apparel Sponsor Helly Hansen, Official Control Systems Sponsor Parker Hannifin and Official Premium Automaker BMW. American Magic is a recognised 501(c)(3) nonprofit organisation. www.americanmagic.com