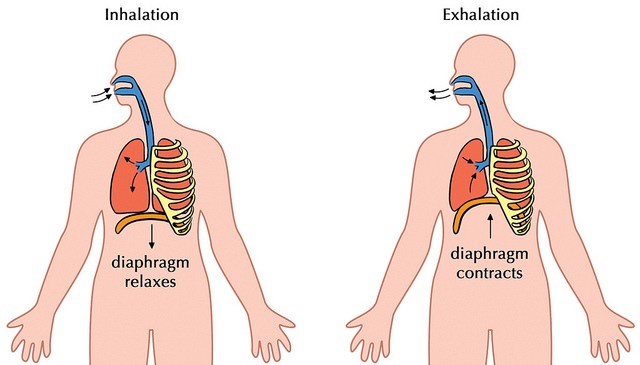 In the newer models (Forerunner 945, Fenix 6, MARQ, Vivoactive 4, etc.), with the heart rate band, you can also further detect your breathing rate (only for some of the models), and can also continue keeping a record throughout the day everyday. This value basically serves the same purpose as the heart rate and can help us monitor the intensity in a timely manner when exercising. Next, we’ll be looking at how to apply the respiration rate in exercise.

[What is Respiration Rate]

One complete breath includes both inhalation and exhalation. The respiration rate is defined as the number of breaths completed per minute.

The following table is the three exercise types that I have recently done: Strength, Run, and Elliptical. I recorded my minimum, maximum, average heart rate and respiration during the exercise period, and also calculate the ratio of heart rate ÷ respiration rate.

And after taking the average of the 17 collected data, we discovered that the ratio of heart rate ÷ respiration rate is about 4 regardless of whether it is average, minimum, or maximum.

This magical number is really close to the information available on the Internet: the average adult’s respiration rate to heart rate ratio is approximately 1:4, which means that for each breath, the heart beats 4 times.

Note: I used the HRM-Tri heart rate band + FR945 to carry out the testing for the above information.

Although from the overall average, the data is very consistent with the principle of respiration rate : heart rate = 1:4, but if we analyze the changes during the actual running process, will we get the same result?

The following graph shows the data on the relationship between respiration rate and heart rate for my 3/26 run (Tempo Run):

Respiration Rate : Heart Rate = 1: 4 is the overall average concept, but this may not be the case in extreme situations.

For example, through my observation, I saw that my maximum respiration rate was about 58 ~ 59, and my maximum heart rate reached 188, so the conversion ratio was about 3.2; and when I’m sleeping, my minimum heart rate was 40 and my minimum respiration rate was 6, so the conversion ratio was about 6.67. That is to say, although the overall ratio is still around 4, but from the lowest at 3.2 to the highest at 6.67 still may occur.

Although the watch also has the function to provide the 24-hr heart rate, it only provides the trend chart and does not calculate the average heart rate for the day. Also, if I exercised that day, then the heart rate throughout the day will also include the exercise heart rate. Therefore I chose the “Sleep Heart Rate” as the reference for the minimum, maximum, and average heart rate during the non-exercise period. For the minimum and maximum values of the respiration rate during the non-exercise period, I also used the minimum and maximum values measured during sleep.

We’re able to see that there’s quite a big difference between the ratio calculated from both the “minimum” and “maximum,” which were, respectively, 6.6 and 2.9, and the value [4]. We speculate that the main reason is because both of these are peak values. They are the extreme outliers which occur during sleep, so they will cause a larger deviation in the calculated ratio.

However, if we take the average respiration rate and heart rate of the entire sleep data, the calculated ratio of 3.8 is pretty consistent with the value of [4].

Through Garmin Connect, we can view the trend graph of the respiration rate throughout the day, but only for the “non-exercise period,” see the figure below.

You can use the 24-hr respiration rate function to check the respiration rate at each point in time, and it will display the three values, namely the average, the minimum, and the maximum, for the period being awake. If you need to view the average during sleep, then you must enter from the sleep analysis graph to view it.

You can see that the respiration rate was not recorded between 12 o’clock and 1 o’clock (did running exercise), because the watch uses HRV to analyze. If you are overly excited, the Garmin Elevate will not be able to make the detection. If you need to look at the respiration rate when exercising, you must wear a heart rate band * with a compatible device * for it to be recorded, and you must select said exercise mode to view it.

Part II: The Frequency of Strides and Respiration Rate When Running (Only During Exercise)

In Garmin Connect (GC), there are instructions for how to breathe when running. You’ll find that different frequency of strides and breathing methods are adopted according to different speed requirements, such as the common 2 to 2, which is inhale while taking two strides and exhale while taking two strides. Of course, in actual running, you just need to breathe smoothly and naturally. You don’t have to deliberately do 2 inhale-2 exhale or 3 inhale-3 exhale, but since Garmin ’s equipment can now detect the respiration rate, it is also quite interesting to analyze [afterwards] and understand your own breathing pattern when running.

The following is an analysis of my recent running data:

Considering that the pacing speed will affect stride and breathing, so we listed the “pacing” column as one of the reference indicators.

Note: The minimum and maximum values in the table are for reference. After all, these two values are regarded as peak values.

Do you now understand your own respiration rate? And the number of steps you can run for each breath cycle? Now you know that the respiration rate : heart rate ratio is about 1:4. Knowing these do not substantially help improve your own running ability, after all, to run better, faster, and with more power, years of running practice are still required. However, after observing and comparing for a long period of time, you may be able to find out early whether your body has abnormalities.