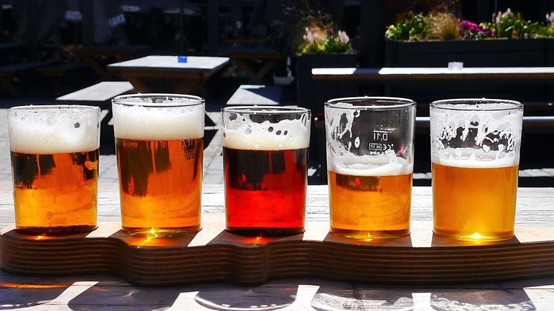 Beer is Not Willing to be the Scapegoat for “Beer Belly”……

When the weather is hot, watermelons and air conditioners with cold drinks have become necessities to cool ourselves down. Eating barbecue with beer is even the standard supper during summer.

By then, many people will remember that their belly has already been gradually expanding, will it just become bigger and bigger if they continue drinking?

Is the “beer belly” that we often talk about really caused by drinking beer?

Beer is Not Willing to be the Scapegoat for “Bear Belly”

“Beer Belly” is actually a figurative expression of belly fat, but because the big belly is often photographed with the beer mug, that’s how the name came to be.

It’s just like the man in the picture below, holding a beer mug in his hand next to his proud “big belly.”

However, beer is actually falsely accused. It’s not the “culprit” that causes belly fat at all.

Usually, when people talk about obesity, the first thing that comes to mind is eating too much. In general, the higher the number of calories in a food, the more likely it is to cause weight gain.

Beer itself is not high in calories; there are about 30-40 kcal in 100mL of beer. The bottled beer that we often drink is about 600mL, which is equivalent to half a bowl of rice.

Secondly, alcohol is categorized as having “empty calories,” and most of which will be metabolized in the liver. The rest is excreted along with sweat and urine.

In other words, the calories of beer itself are not high and most are discharged by the body。. Since beer is not the real cause of the stomach becoming obese, then what is?

The Real Reason for the Formation of “Beer Belly”

It’s time to reveal the truth. There are four main factors:

Although beer isn’t the culprit, it still serves as an “accomplice.”

Studies have found that alcohol will make your brain feel hungry. This is why we have pretty big appetites and feel that anything we eat is delicious while drinking beer.

If we’re not careful, we will consume a lot of high-fat, high-calorie foods, such as barbecued and fried foods, etc. As time goes on, the belly will naturally become bigger.

Nowadays, people, especially businessmen, may not even have time to rest when they are busy. Once they sit down to work, it’s for the whole day.

When the pressure is high, there seems to be an endless flow of small snacks, such as potato chips, cakes, biscuits, tea with milk, and coke. In addition, there is usually almost no time for exercise, so, in the end, the more we sit, the fatter we become.

One thing I’d like to mention here is that don’t think that only men get “beer belly.” With long periods of being sedentary, overeating, and lack of exercise, it’s hard for even women to be exempt from the trouble of having a small belly.

“Be the person that stays up the latest and become the fattest person!” This is a popular phrase on the internet recently. The two may sound unrelated, but there is a lot of scientific evidence proving otherwise –

The end result showed the less they sleep, the thicker their waistline (of course they’ll also become fat).

Of course, one more thing that is inevitable is –

With age, basal metabolism begins to decline. The body fat content will increase at a rate of (about) 3% per decade.

Attentive people might discover that these are also reasons for weight gain. But why is it that the belly is the first that becomes bigger?

Compared with other races, Asians are more likely to accumulate visceral fat and deep subcutaneous fat, which is in the area of the waist and abdomen.

In addition, the prolonged sedentary mentioned above is also the cause of abdominal fat accumulation.

“Beer Belly” is Ugly and Dangerous

“Beer belly” is considered abdominal obesity, and the World Health Organization believes that it is very likely to become one of the most dangerous killers of health.

Abdominal obesity is one of the main factors that accelerate aging. It has been proven that more than 15 diseases which can directly cause death are linked to it.

One could say that it does nothing but harm.

So, how can the nasty and unhealthy “beer belly” be eliminated? The answer is simple: Remain committed to exercising.

In the experiment, they divided the volunteers into two groups: one doesn’t exercise and one with a fixed number of exercises per week.

After 12 weeks, the difference and change in the internal fat was measured. Results showed that compared to the non-exercise group, exercises helped reduce the visceral fat by an average of 225g, which is 8%.

We recommend that you can start with aerobic exercises, such as running and swimming, and maintain a frequency of 3~4 times a week.

When the body is able to fully adapt to the current intensity, you can continue to increase the amount of exercise or try to include strength training.

However, you need to be aware that those exercises directed at the abdominal muscles won’t be able to help you directly to lose the fat on the stomach. Losing fat on only certain body parts is a misunderstanding that many people have.

Whether it’s swimming, cycling, or running, Garmin watches can accurately record your data. There are dozens of built-in sports modes, choose the one you like best and get started!

While exercising, it’s best to be able to pay attention to your heart rate in real time.

Keeping your heart rate interval between 60%~70% of your maximum heart rate while exercising can help you to maximize your weight loss.

In addition to regular and effective exercise, you should also pay attention to your lifestyle habits. Because obesity is not caused by “laziness,” it is also related with stress and sleep.

Garmin watches support 24/7 monitoring of stress and sleep, which can help you to make the appropriate adjustments to improve.

Of course, it’s still best to avoid beer! If you can’t resist and still want to have a drink, then remember to not eat any other food, or else the more you eat, the more hungry you become~