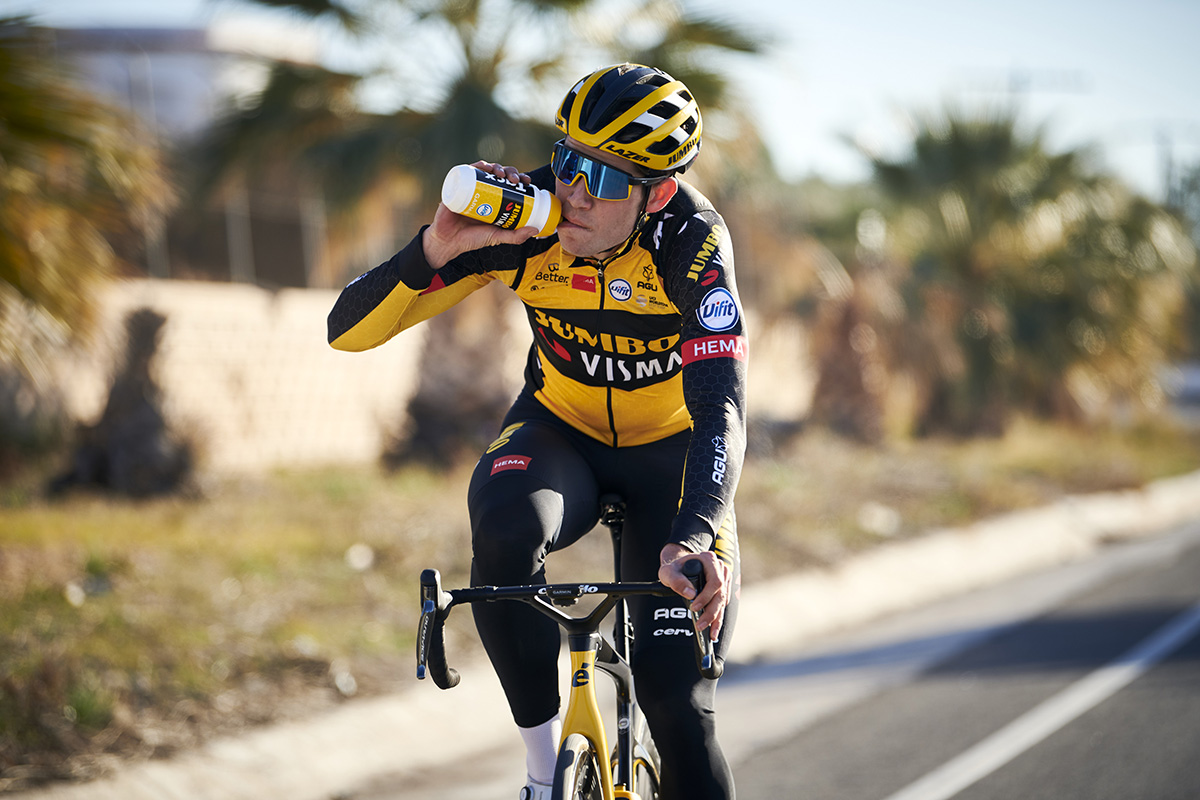 How Nutrition Can Help You Become a Better Cyclist

Most cyclists put a lot of effort in their rides, training schedules, bike maintenance and more. But are you putting enough focus on what you’re putting into your body? Pro cycling team Jumbo-Visma credits nutrition as a big contributor to their current success. Read on to learn more about the importance of nutrition and how it can contribute to becoming a better cyclist.

According to Martijn Redegeld, head of nutrition for both the male and female teams at Jumbo-Visma, performance can be improved with a good nutrition plan.

“We have been working on this area for about 5 years now, and it certainly has been a key factor for our great successes of the past years. But we are not there yet: The developments in the world of nutrition follow up quickly, and there is still a lot to be learned and gained.”

The philosophy within the team is quite simple: Basic nutrition has become central again.

“The focus on this had completely disappeared in the cycling world,” Redegeld says. “Everyone was busy with exotic supplements, powders and pills for the magical effect. But nobody cared about the pure everyday fuel that was used, the amount of protein to recover and so on. In fact, there is a gain of 80-90% that can be derived from basic nutrition. This sounds simple, but getting it right, and getting it tailored to your specific training or race each day, is another thing. It requires a lot of knowledge and understanding within the team.” The riders were a bit skeptical at the beginning but then quickly realized the importance of it. They have more energy during their training sessions, they recover faster and are able to deliver that top performance again the next day. They also feel much more vital in the third week of a Grand Tour, like the Tour de France, for example.

The keyword for the nutrition philosophy within Jumbo-Visma is consistency. “A good nutrition plan is not something you can do for just a couple days and then pay no attention to it anymore,” Redegeld explains. “We design a year-round daily nutrition schedule for every rider. Before the start of the season, we check the race program and the weight of each rider. In this way we can make an individual plan where one chooses, for example, to keep the weight steady, where we need to gain or lose weight. If a rider will join a stage race with a lot of climbing, then we know that less weight is important for that period of time. Besides the calendar, we also keep track of the health of the riders, and how we can create the maximum training gain based on nutrition.”

Pro tip: “One of the biggest mistakes many make is to eat a big breakfast, start cycling an hour later and then in the first hours of the ride they don’t eat because they think they can still go ahead,” says Redegeld. ”But in the meantime, the fuel supply in the muscles is already declining. So if you’re making a long ride, start eating already in the first hour and keep eating systematically. Just take a gel, bar or water bottle every hour on a standard ride. During an intensive or longer ride, increase it to two per hour. Keep doing this, even if you are already close to home at the end of your ride. In this way you keep your fuel storage as high as possible with the aim of not reaching the bottom of it.”

Another key factor? Hydration. During your ride, make sure you drink evenly, just like eating. On average this should be 500 ml per hour (roughly one 20-oz. water bottle), though it varies from person to person and depends a lot on how much sweat you lose.

Pro tip: How do you know if you drank enough during your ride and how much extra you have to drink when home? Redegeld has an easy trick for this. “The best way to determine this is as follows: stand on the scale before and after your ride. You’ll notice that you always lose some weight, and this is entirely due to sweat loss. If you’ve lost 1 kg (2 lbs), then you have lost 1 liter of sweat. You then have to drink a little more (1.5 liters or roughly 2.5 20-oz. water bottles) to be able to compensate for it. It’s not necessary to immediately drink this right after the ride but pay attention to this in the hours after. This is especially important if you’ll also exercise in the following days.”

There’s a rule of thumb to lose a maximum of 2% of your body weight during a ride. When your weight has decreased about 4%, then you know you’re doing something wrong. You may have noticed that you were a bit dazed or maybe had some muscle cramps. Pay attention to your nutrition schedule for the next time, because it doesn’t only drop your performance — you could also pass out.

On some tough race days, riders can burn up to 8,000 calories and beyond. Unfortunately, it is impossible to consume the same number of calories during a race. This has to do with the limiting factor of the human body: It can roughly absorb 90 grams of carbohydrates per hour. That’s about 3 snacks, like a gel, bar or sports drink. For many people, this is already a lot to digest. If you are not used to this, you are guaranteed to get stomach or intestinal complaints. For pro riders it’s not a problem, because they are used to the intake of large amounts of sugars during their training sessions. But there is something special about this limiting factor: They discovered you can actually train and stretch the maximum carbohydrates a body can absorb. How much more is the holy grail in cycling at the moment, but like every training, if you repeat something often enough, your body will adapt to it.

To supplement the great loss in calories, the team makes sure the riders eat and drink enough before, during and after the race with the help of a strict nutrition plan. Consuming a meal during breakfast or dinner is obviously easier than in the heat of the moment during a race, so the team coaches their riders from the team car. “We try to stretch the intake during a race to the limit. The riders are regularly instructed to eat or drink something, when they should empty their water bottle or when it’s a good time to eat a bar, for example. A number of riders also set the nutrition alarm on their Garmin Edge® to be reminded.” The team also pushes their riders to take extra care of their nutrition in the first hours of the race. All to make sure they are ready if they have to attack sooner than expected.

Right after the finish, the riders transmit all their race data from their Garmin head units and tell the coaches what they have consumed during the ride. The number of gels, bars and water bottles, etc. The team will then immediately calculate whether this was in line with the nutrition plan. Some adjustments have to be made regularly, because a rider may have burned more calories or ingested less than planned. They also immediately start drinking a recovery shake consisting of proteins combined with sugars to replenish their energy supplies. In the bus to the hotel and during the massage, there are two or three extra moments to eat. Depending on the severity of the ride, this can be a recovery meal or a snack. The timing of these intakes is important and according to Redegeld, it is much more effective to eat smaller portions, think every hour, than to eat a very large meal at once. These things are critical and can make the difference between winning and losing.

At dinner the correct portion is calculated so the team is sure that each rider can replenish everything. This is particularly important in the long and heavy Grand Tours. In the past, it was played by ear and after two weeks of tough racing, many riders no longer knew what they really needed during breakfast or dinner. “In every Grand Tour there is always a GC contender who suddenly collapses in the third week. This is not because he suddenly loses his physical shape, but because he has not replenished his energy supply properly for one or a few days. By calculating this now, the riders are always well fed at the start and it gives them some peace of mind because they don’t have to think about it themselves anymore,” Redegeld explains.

Pro tip: There are many products and supplements available for cyclists. How do you know what’s best for you? “As long as it mainly contains carbohydrates, it is a good product,” Redegeld says. “Think of a sports bar or a banana. A liquid product such as a gel will be absorbed faster than a bar. So if you need energy quickly, like just before a tough climb, a gel is better to take. But if you’re doing an endurance training at a modest pace and eat and drink regularly, it doesn’t matter whether you take a banana, bar or gel.”

Finally, let’s highlight some nutrition hypes in cycling. Caffeine is a well-known boost for many cyclists, but does it really help? “It is a performance-enhancing substance and can indeed add a tiny bit. You can get this from coffee but note that the strength can vary slightly each time from the same coffee machine. That is why many riders opt for a caffeine pill or gel so they know exactly how much the intake is. It increases your focus, you’re a bit sharper and you may be able to go through the pain barrier a litter easier during a climb. The effect is small but can be decisive at the finish.”

Then there’s the urban myth of beet juice. Does it really make you go faster? “It certainly has its advantages. Beet juice contains nitrate and that ensures your muscle cells to use oxygen more efficiently. Particularly during exercise where oxygen is the limiting factor, like a heavy anaerobic effort, it can offer a small added value. But there are also nutritional supplements that can do similar things. In our team, we don’t value this more than it is. It may add half a percent, but basic nutrition remains by far the most important. If you don’t eat enough the night before, you can still drink as much beet juice as you want, but you won’t win a race.”