When Pamela and Sebastian Blanchard first learned that Hurricane Irma could make landfall in the Florida Keys, they had a decision to make. They lived with their dog Leila aboard a 1979 Morgan 382 sailboat at a harbor in Marathon, Florida, and they were concerned about their vessel enduring the storm. After consulting weather reports and checking their course, they decided to evacuate and set sail for Long Beach, Mississippi, to protect their home. 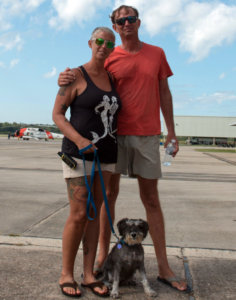 The Blanchards departed on September 6, and the forecast for their planned route — sailing northwest through the Gulf of Mexico — looked good. The first couple of days provided great sailing, but each successive weather update indicated that the days ahead could become challenging.
Sebastian turned to his inReach satellite communication device to get some help. “We texted some friends on land. They were getting updates and told us that we should try to get out of the path of the storm.” Hurricane Irma had shifted west, and the weather in the Gulf changed faster than the Blanchards could change course.

Deciding to Trigger an SOS
On September 9, the Blanchards were about 100 miles south of the Gulf coast city of Apalachicola on the Florida Panhandle. Conditions were disintegrating quickly. The Blanchards could no longer steer or sail their boat, and they discussed their options.

“Nobody wants to abandon their boat,” said Sebastian. “What kind of helped us was being in communication with our friends in Mississippi. They said we needed to make the call.” Around 11 p.m. the Blanchards triggered an SOS on their inReach. They received a confirmation message from the staff at the International Emergency Response Coordination Center (IERCC) at GEOS within minutes.
The staff at the IERCC and their contacts in Mississippi communicated with the U.S. Coast Guard and shared the Blanchard’s situation. The IERCC confirmed with the Blanchards that a Coast Guard helicopter would come for them, but to assure the safety of all involved, the rescue would need to wait until daylight. Sebastian knew that their vessel was sound, but he also knew that they would be in for a “heck of a night.”

That night the Blanchards endured 30-foot waves and their sailboat pitching horizontal. They had some measure of relief knowing that the Coast Guard would arrive soon, but they also knew that a rescue would require them to leave their boat and jump into the high waves of the turbulent Gulf and trust that the Coast Guard crew could reach them. “The Coast Guard lends you their confidence that everything is going to be alright,” Sebastian said.

About four hours later, the IERCC confirmed that a helicopter was en route to rescue the Blanchards. Fortunately, the storm had calmed somewhat, but conditions were still severe. The rescue swimmer from the Air Station Clearwater helicopter crew who swam to the Blanchard’s sailboat in 40-mile-per-hour winds and 25-foot waves recounted that it was one of his most difficult rescues. (Video below)

At 8:28 a.m., the Blanchards sent messages from their inReach device to their friends on shore that they were safe and on the Coast Guard helicopter heading to New Orleans. Leila the dog was safe with them, too. Before leaving, the Coast Guard swimmer attached a radio beacon to the abandoned sailboat, making it possible for the Blanchards to recover their vessel and possessions at some later date.

Despite being mentally shaken by the experience of losing their sailboat and home, the Blanchards and Leila are physically fine and grateful that the Coast Guard crew who risked their lives for them returned to shore safely. The Clearwater helicopter crew shared that the window for the rescue was very short. Had it been a couple of hours later, weather conditions may have worsened and made a rescue impossible.

“We owe our lives to the Coast Guard,” Sebastian said. “Everything they did was top-notch. The story could have turned out a lot different without their help and the inReach.”
“I was very impressed with the inReach, both as a communication device when we’re sailing and for weather,” Sebastian added. “We’re going to take it and use it everywhere, whether we’re on land or water.”

The appearance of U.S. Department of Defense (DoD) visual information does not imply or constitute DoD endorsement.