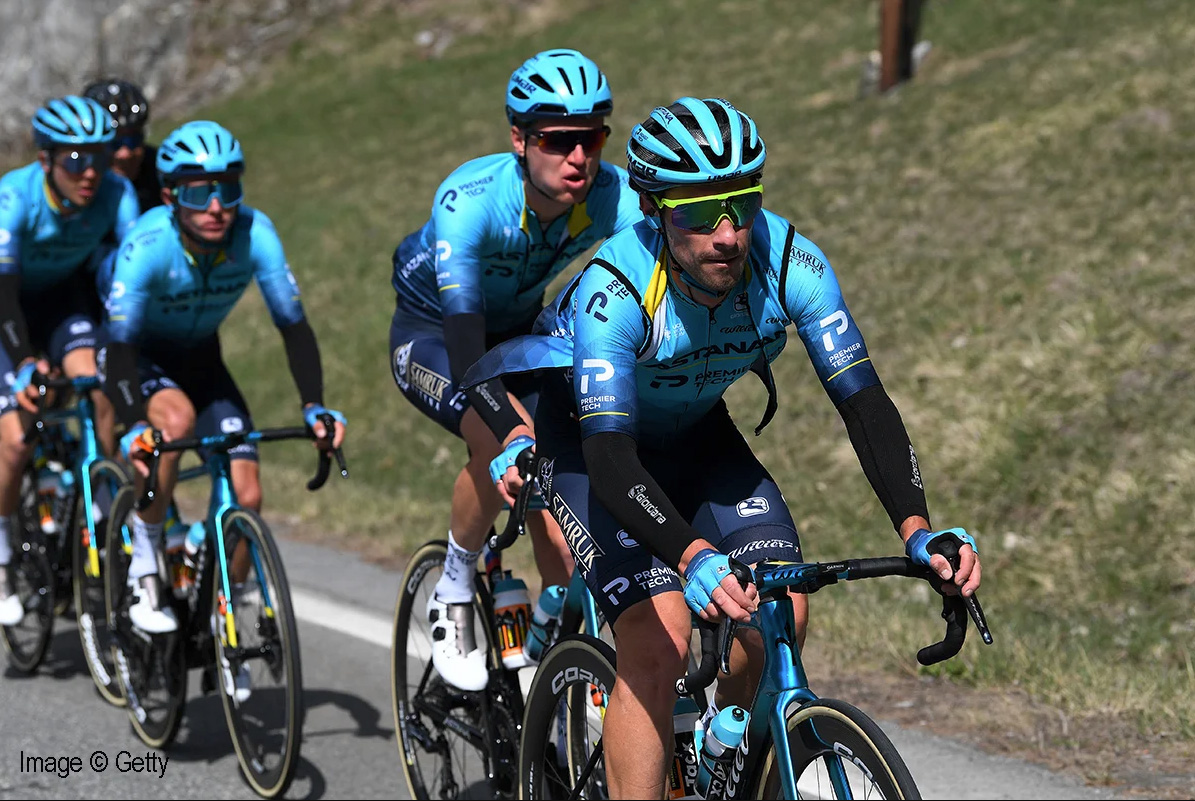 How the Pro Teams Prepare for the Giro

With the Giro d’Italia coming up, many pro teams have set their eyes on the iconic trophy: the Trofeo Senza Fine. Astana – Premier Tech has won the Giro three times in the past 13 years and is heading to Italy with a young but talented team. They explain how the team and riders prepared for this Grand Tour, and what it takes to win it.

Dmitry Fofonov, team performance manager of the Kazakh – Canadian team, looks back on winning those pink jerseys. “It was fantastic! Especially when Vincenzo Nibali won the Giro for the second time in 2016; it was very special. He was a class apart and we had a very strong team with Jakob Fuglsang, Tanel Kangert and of course the late Michele Scarponi.” Dutchmen Steven Kruijswijk was set to win the Giro and take home the Maglia Rosa but crashed heavily into a snowbank in stage 19. “That was an amazing stage that turned the race upside down. Scarponi was in the breakaway but waited for Nibali after that crash to help him for the GC (general classification).”

This year the team has placed their Giro hopes on the young but talented Aleksandr Vlasov. The Russian finished third in the Tour of the Alps, the stage race that is considered as the final rehearsal for the Italian Grand Tour. He will be accompanied in the Giro by a young but qualitative team. Luis León Sánchez is the oldest on the roster but brings, with 24 Grand Tours on his impressive honors list, a lot of experience to the team. But how and when was this team selected for the Giro? Let’s wind back the clock a few months.

In November the team starts building the plan for the upcoming season. “It’s the moment when the season ends for the riders, but for the team’s staff it’s the start of creating a new plan, programming the training camps, etc.,” Fofonov explains. There are many types of races on the calendar, but Astana – Premier Tech is focusing on stage races and Grand Tours. “Once the route and stages of the Grand Tours are presented, you know what to expect and how hard they will be. Like if there are many heavy climbs, how many time trials are included and so on. Then you look at the characteristics of your GC riders so you can adapt the rider’s choice based on that and start building a team per Grand Tour. Besides the riders, a team also consists of a trainer, sports director, doctor, nutritionist, mechanics, etc.”

Creating a team is always about the right balance. Some teams have two GC riders for a Grand Tour, but Astana – Premier Tech prefers to focus on one. Once the GC rider has been selected, the staff will build a whole team around him. These riders have to support him in the best way possible. “The composition of the team is based on the stages of the Grand Tour. If there’s a lot of flat stages, you need riders who are at their best in the flat to protect the GC rider. The same goes for the mountains. But it also depends on how you want to race: Are you going to follow or attack,” Fofonov explains. Even though a WorldTour team can only bring 8 riders in total to a Grand Tour, the selection is wider when they start forming the team. “Normally, you start with 14 riders in the beginning and during the season, you pick the best riders to support your GC rider for a Grand Tour. But on paper it’s always something different than in reality. Sometimes you just have to make some last-minute adjustments because of a change in program or a rider becomes sick or injured. You need to adapt to it. The ideal world does not exist.” To make sure every rider of that team is at his peak during the Giro, they all have a specific training plan based on their role. For some this means they have to focus on the flat roads, for others it’s the mountains or supporting the GC rider in the final of a stage.

The Power of Garmin Data

During the selection process, the team also dives into the data from the Garmin devices their riders use. “They don’t start a training anymore without Garmin. It’s in their system and for them it’s like a mobile phone in their pocket. But Garmin is everywhere in the team. Not only for the pro riders, but also for the trainers, sport directors, etc. We analyse all the data from each training session and all the races in TrainingPeaks®. Not only the performance data, but also things like the number of calories they’ve burned so we can discuss that with our nutritionist. Furthermore, we also upload the course before a training or race so the riders don’t get lost. Simply put: Our riders don’t move nowadays without their Garmin devices.”

The final selection of the roster for a Grand Tour like the Giro is based on data as well. “Back in the day a rider could tell he was in the shape of his life, but you were never sure. Today they all use a Garmin device, so we have all the data. How did he train, how does he feel, is he recovered or tired?” The riders are informed in time if they are selected or not so they can fully concentrate on riding a Grand Tour. The first 5 riders already have a guarantee to ride the Giro from November; the final riders are selected after final stage races like the Tour of the Alps and Tour de Romandie.

How to Win a Grand Tour

Many teams and GC riders want to win a Grand Tour. Everyone prepares in the best way, wants to stay out of trouble during the stages and finish as strong as possible in the final week. But what’s the big secret to make a difference and finish on the highest step of a podium? “Cycling is actually very easy, you just have finish first,” Fofonov laughs. “But kidding aside, you need a very, very strong team. Not only the riders, but it’s the entire collective. The staff and people you don’t see around, like the trainers, osteopaths, masseurs, nutritionists, the mechanics. Everyone and every single detail counts if you want to win.”

And then there’s the mental part during the always stressful Grand Tours. Especially when fighting for the GC, this has a big impact and can make the difference between winning or losing. “It’s very important. Without the right mentality, you can’t succeed. You need to be strong, especially in the third week. It’s also part of the character of the rider. Vlasov is still a young rider, but he has a good character and focus. He knows what he wants.”

What does the team expect from Vlasov in the upcoming Giro? “Everyone who starts has a chance to win. At least this counts for the GC riders. We have a strong performance plan and want fight for the best place. Of course we like to win and did that in the past. So why not? A race is a race and the best rider wins. We try to do our maximum,” Fofonov concluded.

TrainingPeaks is a registered trademark of Peaksware, LLC.