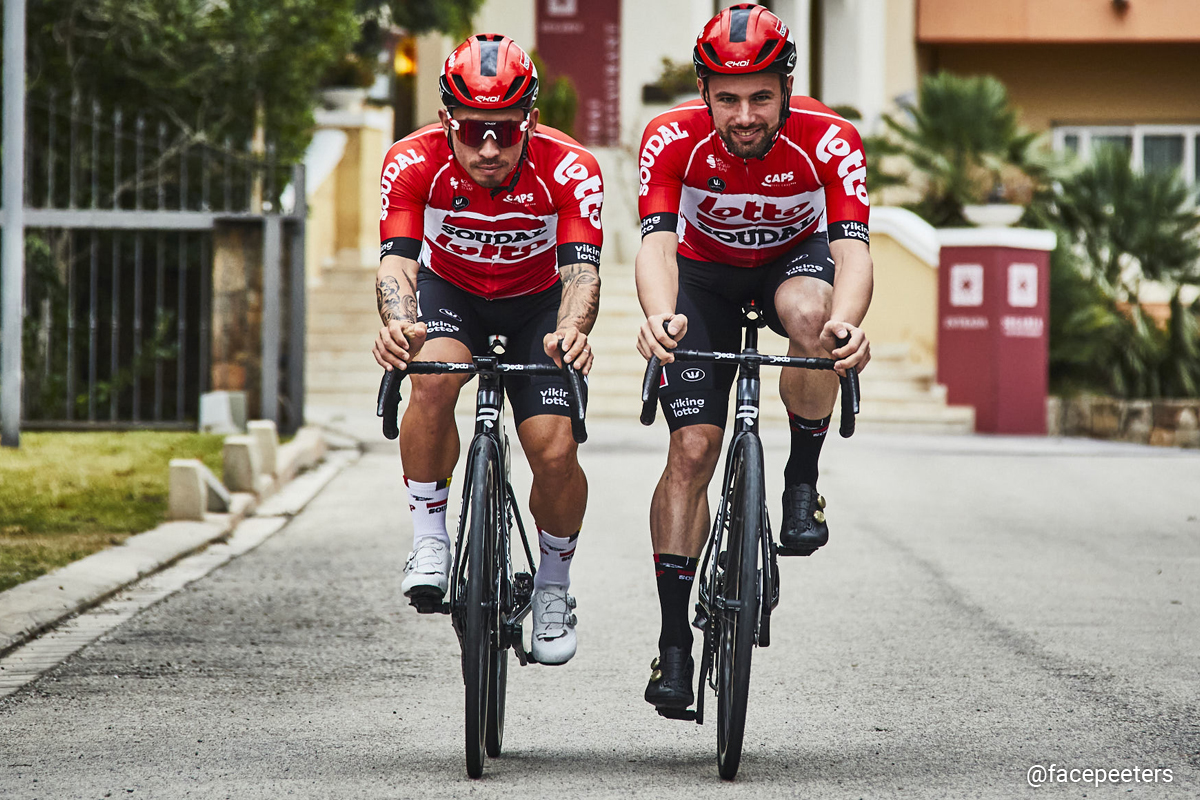 How a Sprinter Survives in the Mountains

Pro cyclists face a mixture of all disciplines in the Grand Tours. For a chance of becoming the overall winner, you need to be a real all-rounder. But there are riders who are specialised in just one discipline, like sprinters. Given that the sprint stages are spread over 21 stages, they often have to survive the heavy mountain stages in order to make it to the next sprint opportunity. Caleb Ewan, one of the top guns among the current sprinters, explains what it takes and how difficult this can be.

From pro team Lotto Soudal, Caleb has a killer instinct when it comes to sprinting. If he joins the race, chances are that he will step on the podium. And probably on the highest step as well. The Australian is happy to be a sprinter in this era: “We’ve got so much depth in sprinting nowadays. It’s not like in some years when there was one dominant sprinter. Now no one knows who’s going to win; there are so many guys who can actually win. Sprinting, at the moment, is at one of the most exciting periods of the last 20 years. It’s nice to be part of that.”

In preparation for France’s most famous Tour, Ewan focuses on everything. “The hardest part for sprinters, for me anyway, is getting fresh to a sprint stage and being able to get through the whole Grand Tour. Sprinting is a part that comes naturally to me, that’s my talent, let’s say. But the rest isn’t really my talent. I’m no better than a normal person when it comes to climbing a hill or trying to get through a three-week Grand Tour. So we were more focusing on that to help me get through there and finishing in a fresher condition so I can actually do a good sprint in the end.”

Winning the final stage on the Champs-Elysées is one thing but getting there is another. Many gruesome mountains have to be conquered in order to make it to the final stage in Paris. On top of that, all riders must finish within the daily time limit. Ewan is clear about that aspect of a Grand Tour: “I hate it … with a passion. It’s horrible. We have to finish within 30 or 45 minutes of the best climbers in the world.” Ewan sighs and thinks for a moment about what’s coming up in the Tour. “Mentally it’s so hard. Sprinters are very competitive, and you can make yourself suffer a lot when you’re going for a win. But to make yourself just suffer to make it through a stage is mentally very hard. On the day itself it seems almost pointless. You spend a lot of time at the back of the bunch with a few guys. Sometimes you’re five to six hours with just two or three riders full gas, struggling through the mountains. The good climbers suffer as well, but they’re going for a stage win, for a reward. We’re just suffering to get through the stage. And after the stage, you know you have to do it all again tomorrow.”

Struggling in the grupetto

“There are no riders trying to drop others or anything like that,” Ewan explains. “Maybe you have a good day in the grupetto, but other sprinters don’t, so you can help them out. In a few days’ time, it might be you who’s having a bad day and you want them to help you as well. You can help by saying something encouraging to them. Because sometimes when you’re absolutely suffering at the back of the field, you just want to stop. So I like to help out if I can. Besides, when I win a sprint stage, I want to win with everyone there.”

Ewan hopes he’s strong enough to stick in the grupetto during the mountain stages at this year’s Tour. “Last year I unfortunately crashed early out of the race, but two years ago I was going super bad in the Tour. Most of the time I even got dropped before the grupetto, which meant my team had to come back and get me. I can imagine it was super hard for them as well because they were able to ride in the grupetto. But in the end, they are there to help me and I can reward them with some stage wins.”

A little help from Garmin

To make sure the sprinters have some juice left for an upcoming sprint stage, one would expect that they somehow save some energy during the mountainous stages. But reality is different. “Honestly, there isn’t much saving my legs. Like two years ago at the Tour, I was absolutely on the limit trying to get through. It’s like a race within a race, a race against the time limit. For sprinters, you’re on the limit on every climb, you have to. Also downhill because we’re already losing so much time. It’s only in the last 10 or 15 kilometres when you know how much time you’ve got left to make it to the finish line. When you’re comfortably within the time limit, you can relax a bit. But you only know that at the end of the stage, before that, it’s hard.”

To make sure he will make it to the end of a stage, Ewan uses the power data on his Garmin Edge® to keep track of his limits. “If you’re on a climb of one hour, for example, and you’re doing 350 watts that you can hold for one hour, then you know you can climb at this pace until the top. You can focus on that. But if we start that climb at 450 watts, I know I can’t hold this for the whole climb. I then need to go back for what I know I can do for the rest of the climb.” And then there’s Garmin’s ClimbPro feature. This allows cyclists who train and compete in mountainous terrain to be better aware of their course. Like total elevation remaining, distance and grade in order to monitor your intensity level. It will not only show the information for the currently active climb, but also for upcoming climbs. This is great for climbers, but also a godsend for sprinters. “It’s always nice to know when you’re suffering, how much longer you have to suffer. When I didn’t have a Garmin and I was suffering, I sometimes got dropped and then discovered it was only 1 kilometre from the top. Now I know when I’m only a few kilometres from the top, so I keep suffering a bit more to get over there.”

The sweetest victory of all

If you wonder why all sprinters want to stay until the final stage in the Tour, knowing that the most difficult part of a Grand Tour is in the final week, Ewan has the answer for you. “One of the coolest things in cycling is rolling on to the Champs-Elysées in Paris. It’s like: I’ve made it after three weeks of suffering, we’re finally here! While the GC riders can enjoy it, for us sprinters it’s game on and you want to win there. You know, winning a stage in the Tour is what most riders dream of but winning the final stage on the Champs-Elysées is like another step above. It’s the one all sprinters want to win in their career. I’d love to win there more times because ending the Tour on a high is the best way,” concluded Ewan.

Follow Ewan and the rest of the Garmin riders at this year’s event starting on July 1st.