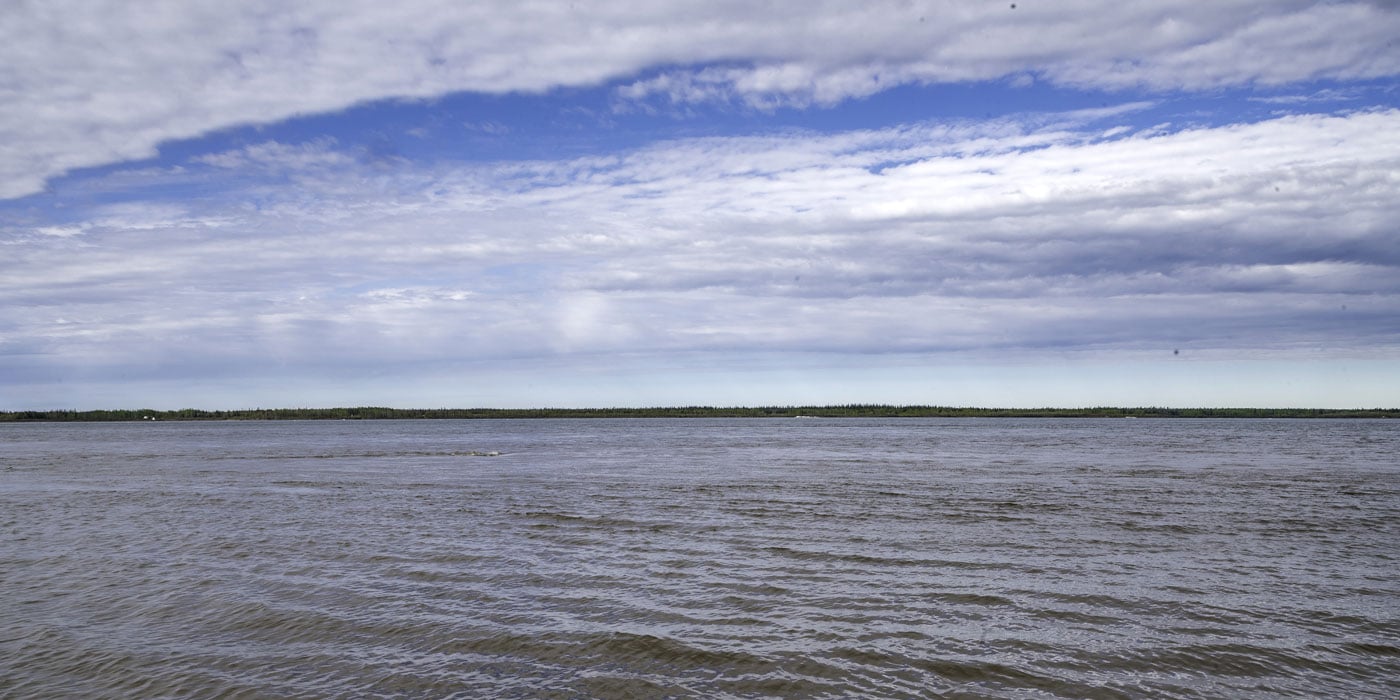 In May 2019, Daniel Acton of Northwest Territories, Canada, set out for a fishing trip with friends on Kakisa Lake. None of them could have imagined what ensued that day. In his own words, Acton shared with Garmin the details of what became a very close call.

“May long weekend is the first sign of summer in the Northwest Territories, Canada. Two friends and I decided to travel to Kakisa, a small northern town located on Kakisa Lake , known for its spectacular fishing holes. We drove the trip from Yellowknife with our small 14’ boat and loaded up for the hour trip across the lake. The weather was sunny and hot, and the ice had just melted off about a week prior. It was a beautiful day to be outside.

“We arrived at about noon and spent the afternoon exploring the beach, fishing and having lunch. Later, the weather began to deteriorate, and the winds picked up. I pulled my inReach® Mini out and viewed the upcoming forecast. A windstorm had unexpectedly changed and was now headed for our area, blowing upwards of 20 to 25 mph. At that point, we decided to try and beat out the storm and headed back to the boat launch (an hour away) to avoid the coming winds. The trip back was fairly uneventful with the boat pointed into the waves, and we almost made it back to the community of Kakisa.

“Two miles away from shore, the wind started gusting, and the waves became larger and larger by the minute. Waves were blowing over the bow of the boat, and we quickly started taking on water. After two large waves crashed over, our bailing efforts became futile. The boat began to lurch over and started sinking into the subarctic waters. Very quickly, we were bobbing in our life jackets amongst the 4’ waves. I took very deep breaths to help calm myself and triggered an SOS from the inReach satellite communicator device.

“Within seconds I was in two-way communication with GEOS Internal Emergency Response Coordination Center (IERCC) personnel, and that feeling was very satisfying. They told me that they had my location and help would be on the way shortly. I informed the group, and we decided to lock arms and stay together. Behind the scenes, the IERCC dispatcher contacted local police, and a rescue plan was deployed. They contacted both of my emergency contacts, from what I gathered later, and updated them as the situation unfolded.

“After a while, things started to get rough. The group was shivering, and the cold water was biting us to the core. We stayed in contact with the IERCC, and they relayed messages to the police and search and rescue teams. Due to the remoteness in the Northwest Territories, help was 45 minutes away in Fort Providence. The police contacted locals who live in Kakisa, a town of about 60 people, who started the rescue knowing we couldn’t survive much longer in the cold waters of northern Canada.

“After about an hour submerged in water, our bodies began shutting down, and we couldn’t feel our legs. Hope was fading. I tried to keep the group’s morale up by telling them the IERCC was working on getting help — keep kicking to stay alive. We were at the point where we accepted death when a rescue boat came crashing in the waves headed our way. I told the fellows to cheer up — we made it!

“They pulled up and started plucking our soaked bodies out of the water. I remember getting in and trying to stand up but collapsing due to severe hypothermia. When we got to shore, we were quickly transported by police escort to the next town where a great medical team was standing by to bring us back up to normal temperatures.

“I would like to thank everyone at Garmin and GEOS for helping to save our lives. Without this amazing technology, we would have never made it out alive. Thank you for getting in touch with local police and sharing our coordinates. When talking with our rescuers the next day, we asked, ‘When did you see us?’ They responded, ‘We went off the coordinates from the inReach. Maybe 20’ out is when we spotted you guys.’

“I would highly recommend anyone traveling in the backwoods or on lakes to pack a Garmin inReach device. It saved our lives, and it could save yours.”