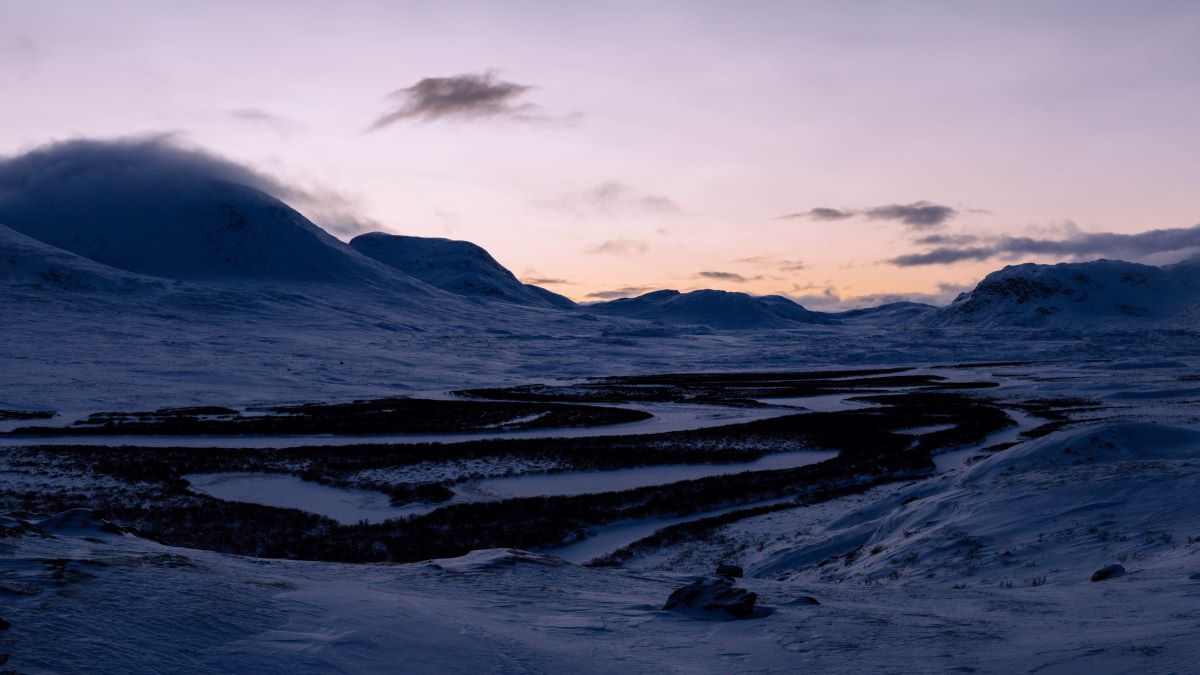 Ruairi Oneill, a 24-year-old commercial filmmaker from Ireland, was seven days into a long winter trek in northern Sweden when he fell through the ice while crossing a frozen river.

Thinking quickly, he planted his trekking poles to keep from submerging fully into the quick-moving water, but still emerged soaked all the way to the top of his knees.

Within minutes, the arctic temperatures began to freeze his pants and boots, making walking difficult and painful. He had seven hours worth of hiking left before arriving at his next shelter for the night.

He was trekking Kungsleden, a popular route and one of the world’s most famous and beautiful hiking trails. The path, established in the 20th century, winds for 400 kilometers and passes through four national parks. Trekkers can take shelter in at least 16 mountain cabins along the way. It’s frequented by adventurers on foot in the summer and on skis or snowshoes in the winter.

Oneill opted to trek with snowshoes, and haul much of his food and supplies in a sled behind him. And although it wasn’t his first solo journey of epic proportions — previously he mountain biked the Icelandic interior and the Scottish Highlands — it did turn out to be a little different.

For the duration of Oneill’s trek through the arctic tundra, temperatures dipped as low as -25 degrees Celsius, and he often was hiking through knee-deep snow and blizzard conditions. He was perpetually cold, but driven to continue by the breathtaking landscapes and sights.

“I was struck by the sheer beauty of the nature and the wildlife in the area,” he said. “It was a gorgeous place, honestly. So totally still and quiet.”

When he was lucky, he slept in the shelter of a hut along the trial. Other nights, he was forced to simply pitch a tent.

The adventure pushed him, both psychologically and physically. While it was an experience unlike any other, at times it was just miserable. And Oneill was by himself.

“The best aspects of solo hiking are the self-reliance and ability to move at your own speed,” he said. “The worst aspect is that often you wish you had people to share the highs and lows of the adventure with.”

He certainly had some lows. Several days into the trip, one of Oneill’s snowshoes developed a long crack in the plastic material. Attempts to repair the snowshoe, and even construct a pair of skis out of a piece of plywood he found, fell flat. He opted to continue on and hope the broken snowshoe stayed intact while he trekked over a long mountain pass.

“I was a little bit scared and a little bit excited,” he said. “It felt a lot better to try to continue on than to turn back.”

But coming down off a mountain ridge, Oneill heard a loud crunch. He looked down and saw that his foot had gone completely through the broken snowshoe, rendering it unusable. He had no choice but to break trail with nothing but his winter hiking boots.

“At that point I knew that I might be in a little bit of trouble,” he said.

Oneill persevered and waded through deep snow to get off the mountain, but eventually was forced to pitch his tent and take shelter due to poor weather conditions.

Huddled in his tent at an elevation of 1,000 meters, it took Oneill two hours to chisel the ice off his boots and free his feet before falling asleep. The next day, he continued on, still cold but filled with the determination to make it to safety.

“With my snowshoes broken, and my feet in ever-worsening conditions, I knew it was my last chance to make it to civilization,” he said.

It was that day — day seven — that Oneill fell through the ice.

When he finally arrived at the hut and built a fire, it once again took him hours to thaw out his boots and free his feet. When he finally did, he saw that his toes were severely frostbitten. It was so bad that he worried he might pass out from the pain, and he was alone.

In preparation for solo adventures, Oneill had purchased an inReach® Explorer+ satellite communicator — at the time more for its navigation and communication features than with an SOS situation in mind.

“Having it as a communication device gave my loved ones some peace of mind while I was out of range of cellular reception,” he said. “But my inReach was invaluable in multiple ways.”

Its preloaded maps showed the location of the mountain shelters along the way, and the SOS feature allowed him to communicate with emergency services despite being in an extremely remote area.

“If I hadn’t had the inReach, I may not have found the shelter with the stove which allowed me to thaw my feet,” Oneill said. “And without the SOS feature I would have had to hike for at least 35 miles in heavy snow on mountainous terrain with broken snowshoes while suffering from frostbite.”

After triggering the SOS and communicating with staff at the GEOS International Emergency Response Coordination Center, the North Sweden Police Department dispatched a Norwegian helicopter to pick Oneill up and transport him to a hospital. There, he received emergency treatment for severe frostbite.

Months later, Oneill is now doing much better. It took several months to return to normalcy, but other than several lost toenails, he’s now completely recovered and in the beginning stages of planning another long hike in the Scottish Highlands.

He’s glad he had the inReach device on that fateful day he fell through the ice.

“Assuming I had even been able to make it to safety, my feet would have certainly been in much worse shape by that stage,” he said.

He advises that winter hikers wear boots a size larger than normal to accommodate extra socks and a vapor barrier, and pack hand and body warmers as an extra source of heat for cold extremities.

Plus, he suggests that hikers always be prepared for the worst-case scenario.

“If something goes wrong in the backcountry, how you deal with it in the first couple of minutes can often decide the outcome,” Oneill said. “Often help may be hours or days away and until it gets there, you are on your own.”

Watch Oneill’s video of the experience here. Note: Viewer discretion is advised as the video contains profanity and graphic images of frostbite.