Getting Help From a Brother and inReach During a Hunt

Steve Foell and his twin brother, Ryan Foell, are avid hunters. A glance at their Instagram feed shows them fly fishing in Idaho, deer hunting in Pennsylvania and duck hunting in Colorado. Following a serious injury during a recent elk hunting trip in the Eagles Nest Wilderness outside Vail, Ryan needed to assist his brother, and having an inReach Mini device on hand was essential in communicating the need for a rescue. 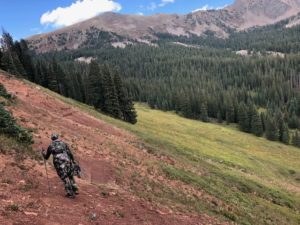 It was a Saturday morning in late September. The brothers spotted an elk and were approaching a shot. “Since I was the caller, I was trying to keep my distance from Ry,” Steve later wrote. “I had to crawl to not be seen.”

As he crawled, a brush or branch pulled an arrow from Steve’s quiver, and the arrow went through his inner thigh, just centimeters from hitting an artery. “It was scary to be 6 miles from my truck and not knowing what was going to happen,” Steve wrote.

At 10:28 a.m. local time, Ryan triggered an SOS on his inReach Mini. Staff at the GEOS International Emergency Response Coordination Center (IERCC) responded 2 minutes later that they had received the SOS and confirmed the emergency. Within minutes, the IERCC contacted local agencies to initiate a response.

Ryan asked if they should stay put and wait for help, and the IERCC advised that they should not move and relayed critical advice from emergency services to not touch the arrow and leave it in place. Ryan elevated his brother’s wounded leg, and they wrapped a belt around the area to minimize bleeding.

Meanwhile, the mission coordinator at the local agency that responded to the emergency requested an air ambulance from Denver. The air ambulance team flew to the coordinates provided by GEOS from Ryan’s inReach device, but the crew was unable to land due to the rugged terrain. An alternative plan was then put into action. The air ambulance flew a ground team and 2 search and rescue paramedics to the area to hike in equipment to potentially carry Steve out by land or hoist him out via helicopter.

“While I was waiting there for 5 hours or so, I truly didn’t know what was going to happen. When the team arrived, they were very professional, and I knew I was going to get off the mountain alive and safe,” Steve said. After the paramedics stabilized Steve, the rescue teams determined that a ground evacuation wasn’t possible. The Colorado National Guard responded, and Steve was evacuated by a UH-60 helicopter and crew. 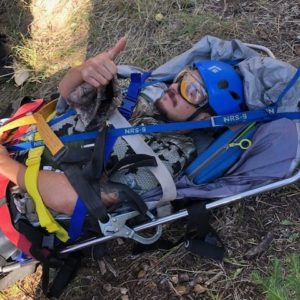 “I’m very thankful for the teams that came out to save me on their days off,” Steve said. “It’s awesome that Colorado has these teams, and they have the utmost respect from myself and my family.”

Steve has fully recovered despite the fact that he has a scar from the arrow wound. Since the incident, Steve and Ryan have had a number of opportunities to return hunting. Their next planned trip is to hunt Coues deer in Arizona. They plan to have inReach devices on hand to provide them with additional peace of mind.

“The inReach was easily the best item I have ever purchased in my life,” Ryan said. “If we didn’t have it, Steve would have lived, but I would have had to hike out 6 miles, drive 30 minutes to get into cellphone service and call someone to get help. It would have been 3 hours until we even got someone to start working on a plan. Anyone that backcountry hunts or hikes should get one.”