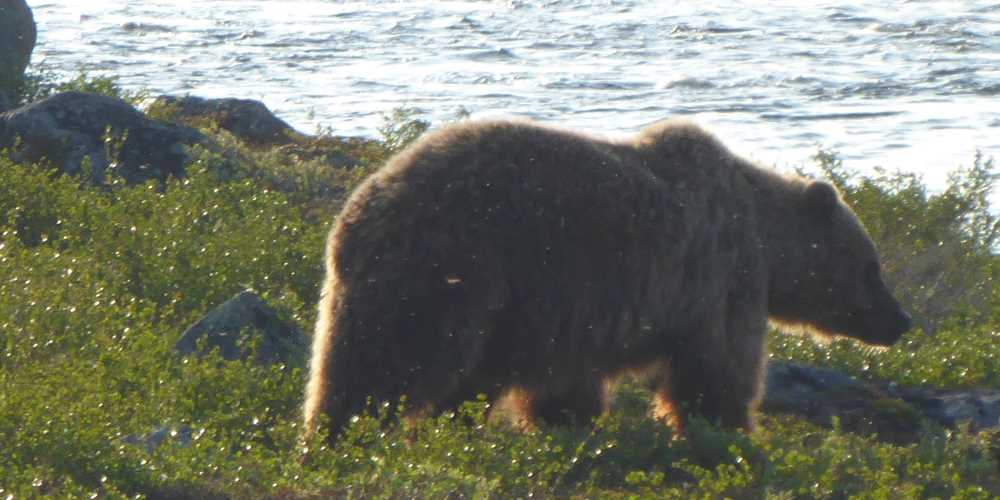 When Todd and Kerri Mozinski left for the Northwest Territories of Canada for a weekslong canoe trip, they told friends and family to expect them back in 40 days.

Five days in, sitting awake through the night as an 8’ grizzly bear circled their camp, they realized that perhaps they had misjudged that guidance. Their only mode of transportation had been torn apart by the claws of the bear — along with thousands of dollars’ worth of other essential gear and food.

The two retired veterinarians from Colorado had dedicated their work lives to dealing with animals. They even had other close bear encounters in their many years of backpacking and canoe trips, but this time, they weren’t sure they would make it out.

Trapped by a Grizzly

They finished up dinner around 9:30 p.m. when Todd saw something over Kerri’s shoulder.

Adrenaline flowing, they grabbed bear spray, got out of the tent and began yelling and making noise. The bear was a mere 20’ away, silently stalking the camp. It got closer, and Todd sprayed, causing it to briefly retreat to the water.

As Todd and Kerri tried to gather their gear, the bear approached again. Todd sprayed a second time, and the bear backed off, clearly unhappy but not enough to retreat. It was a habituated bear, so it was not afraid of humans and knew how to get what it wanted.

Todd and Kerri grabbed their packs and other essential gear and headed back to their sleeping area to get the tent. It had already been destroyed.

“He had broken the poles, it was collapsed, there were holes in it,” Kerri said. “All sorts of things.”

They took off with the gear they had and dropped it about a half-mile from the campsite. The bear didn’t follow, but it was only a temporary reprieve. The only mode of transportation in that area of the Northwest Territories is by boat, and their canoe was back at the campsite.

Todd and Kerri only had one option: head back to camp, and retrieve the canoe.

The bear was still there, and while they were gone, it had destroyed their folding canoe. Although Todd had packed material to repair it, there was no patching the massive holes the grizzly had created in the rubber raft material.

Knowing there would be no way out, they packed up all of their remaining gear and got as far away as they could. After about three-quarters of a mile they got to a lake that they had no means to cross, but by then it was midnight, and they finally seemed to have gotten away from the bear.

They set up a screen tent, and Kerri triggered an SOS on their inReach® Mini satellite messenger. Her hands shook as she typed messages to the staff at the International Emergency Response Coordination Center, who let them know a rescue effort would begin as soon as visibility allowed a helicopter to fly in the morning.

With the peace of mind that emergency services would be coming, Todd and Kerri sat up all night watching for the bear, knowing that if they let their guards down, they could be in trouble. It never came, so when the sun began to rise that next morning, they got out of the tent to get food.

They scanned the area, and the bear was once again a distressing 30’ away. Todd held up the can of spray — which the grizzly had come to recognize — and the bear walked off.

Not long thereafter, the bear found their food and went on to spend the next several hours tearing through it — less than 100 yards away from where Todd and Kerri sat. They silently messaged back and forth directly with the Royal Canadian Mounted Police constable who was coordinating their rescue.

When the helicopter appeared overhead, the bear was still nearby. The game warden and rescue team saw the situation and moved quickly, landing the helicopter and jumping out to whisk Todd and Kerri far from bear country.

“Had we not had the inReach, we would have been in a true survival situation,” Kerri said. “This happened 5 days in to a 40-day trip. We were not scheduled to be overdue until Aug. 25, so nobody would have been looking for us.”

And they had no feasible way out.

“With the bear having destroyed our canoe and gotten our food, and us being a 3-hour flight and a 500-mile canoe from the nearest city, we would have been in trouble,” she said. “So your device truly saved our lives.”

Todd and Kerri bought the inReach device just prior to the trip, but more with the thought in mind of being dumped in a rapid or losing the canoe.

As for surviving a bear encounter, they recommend doing research prior to heading into bear territory, always carrying bear spray and staying calm.

“We were really scared,” Todd said. “But we were kind of running on adrenaline and just trying to deal with the situation. We were most worried while we were waiting for rescue in the morning, but when we heard that helicopter … we knew we were going to get out of there OK.”

Todd and Kerri ultimately didn’t let the bear ruin their plans and, after decompressing for a bit, headed out to finish the 40-day adventure in Alaska. Plus they have many more travel plans, including a possible trip back to the Northwest Territories. They’ll have their inReach, though.

“Had we not had it … ” Kerri said. “We just really want people to know about the product. The inReach was a such a big thing for us.”