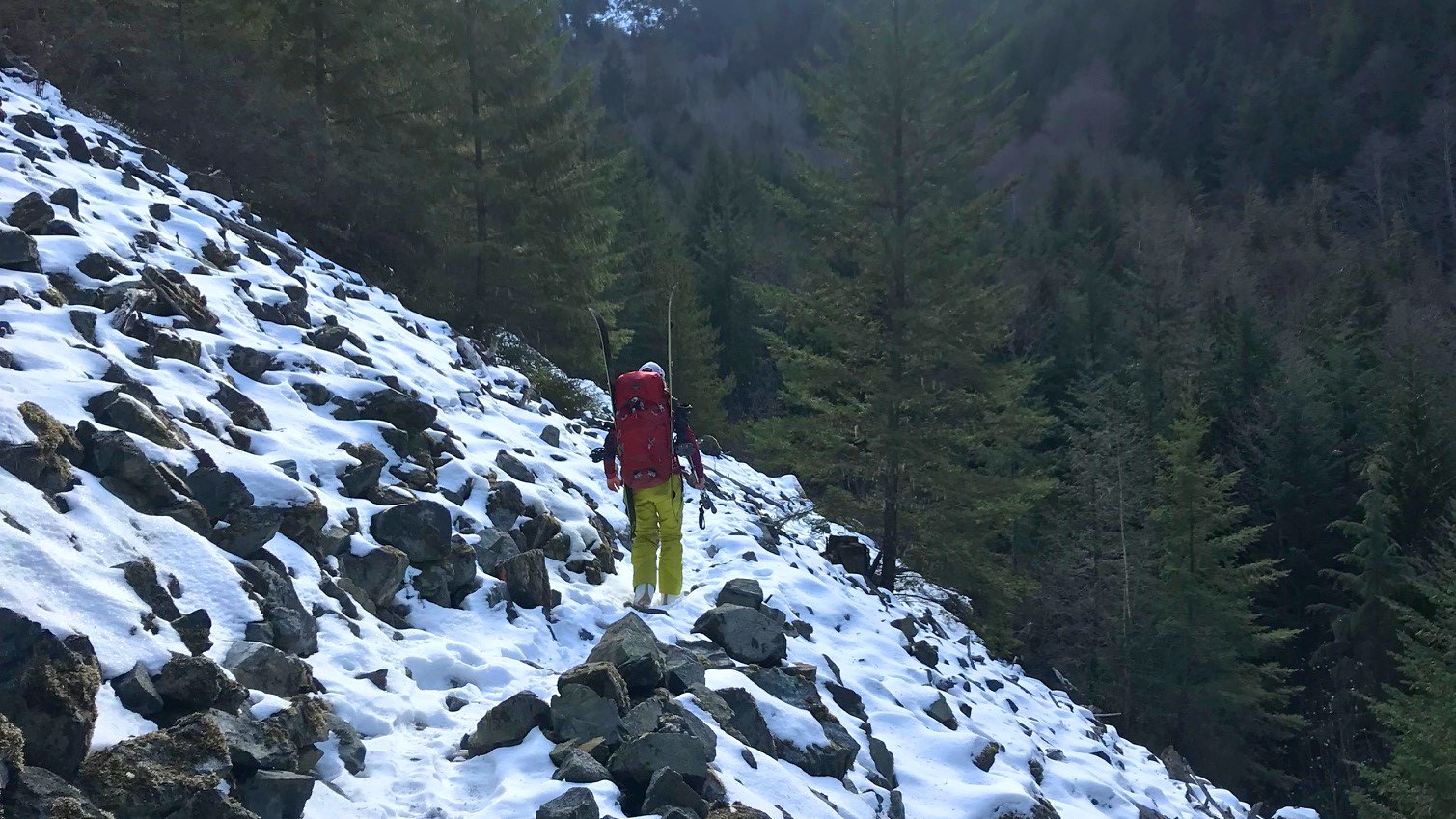 When Matthew Desfosses and his skiing partner set out in the early hours of a February 2019 morning, the plan was to spend the night in Lizzie Creek Cabin in the mountains of southeast British Columbia. Instead, they spent the night battling hypothermia in a snow cave.

Little did they know that they were a mere 500’ from the cabin. Darkness, blizzard conditions and the cabin’s naturally dense surroundings had thwarted their ability to find it.

That day, they had spent nearly 16 hours making their way toward the cabin with packs and skis. Some of the winter access trails they planned to follow had not been packed down, forcing the two skiers to bootpack up summer hiking trails.

Throughout the day, fresh ski tracks had led them in the wrong direction, causing them at one point to bushwhack to get back to the intended trail.

“Needless to say, that was not ideal,” Desfosses said. “It took quite some time and some energy.”

About 12 hours into the ski, they became exposed to the elements above tree line. The hut is located within an island of trees in a small valley between two mountains, and by the time they made it into the valley it was dark and snowing heavily.

“That was not too much of a concern, just a bit of a nuisance realistically,” Desfosses said. “But as we progressed into the valley, the wind picked up, and the visibility went down to maybe 10 or 15’.”

They found a few other ski marks from that day, but the tracks were getting filled in rapidly by snow. Based on their research, Desfosses and his partner knew the hut was located on the left-hand side of the tree line, but when they headed that direction, they encountered an impassable boulder and block of ice.

Their only choice was to go toward the right-hand side and approach the hut from the back side. There, they found more ski tracks that they thought certainly would lead to the hut. They did not.

By that point, it was midnight. They were exhausted. They knew where the cabin should have been, based on maps, but simply could not find it.

“We elected to just cross the entire island of trees from inside the forest,” Desfosses said. “North, south, east, west — no signs of the cabin. I knew on the map where it was, and I knew roughly where we were — we should’ve been right on top of it — but we couldn’t find it.”

They started screaming and whistling, desperately hoping that someone in or near the cabin would hear them over the howling winds.

“No answer, obviously, with the weather,” Desfosses said. “So at that point, it was becoming quite apparent that we were going to be spending the night on the hill.”

Desfosses built a snow cave under a tree well and started preparing to spend the night. To warm up, Desfosses asked his partner to get rice and hot chocolate out of her bag.

“Her responses were quite slow and absent and eventually just zoned out,” he said. “She was unable to entertain a conversation, so I knew she was approaching phase two of hypothermia.”

Desfosses, a paramedic by trade and an avid outdoorsman, was concerned.

“I knew she needed to get off the mountain sooner rather than later, and I was uncomfortable as well,” he said.

So Desfosses triggered an SOS on his inReach® satellite communicator and began messaging with the staff at the GEOS International Emergency Response Coordination Center. Due to the darkness and weather, they updated Desfosses that a helicopter would be dispatched at first light.

“It was quite reassuring to have that back and forth,” he said.

Cold and exhausted, Desfosses and his partner went to sleep in the snow cave. While they hadn’t packed lightly, they had packed intending to spend the night in a cabin with a woodstove. To stay warm, they put on all the layers of clothing they had packed and piled up additional layers of maps and bags between themselves and the snowy ground.

At one point, his partner announced she was feeling hot and began peeling off layers. Desfosses knew from his medical training that was a bad sign.

“People don’t become hot and wanting to peel off their jackets in minus 20-degree weather,” he said. “At that point, you’re progressing down the ladder of hypothermia.”

He instructed her to keep the warm layers on, and eventually they both fell asleep. To their relief, the sound of a helicopter awoke them the next morning.

As Desfosses and his partner flew away to safety, they saw how close they had made it to the hut.

“That was the most frustrating thing,” Desfosses said. “But it was a hut that was built in the 1960s, and it’s so grown in now that the search and rescue person said that even during the day you can walk in front of this cabin two or three times, and you won’t even notice it — so it’s impossible to find it at night.”

For those who enjoy time in the backcountry in winter, Desfosses recommends a few key things.

“The things that were a success to getting off the mountain intact were definitely multiple layers, the stove, some food and some warm liquids,” he said. “Plus, having all the right tools — the inReach, a compass, a headlamp.”

He purchased the inReach device because he often goes on long mountaineering trips in British Columbia.

“Historically, I’ve just left a note or told people where we were going and roughly how many days we would be gone, give or take a day or two, and hoped that we came out on the other side,” Desfosses said.

He decided to purchase the device after seeing a friend using his.

Without the device on that fateful trip, he said they probably would have had to try to make it back to safety the next day “in a very cautious and uncomfortable manner” or hope that they could find the hut and someone there would have a form of communication.

“It wasn’t a completely crazy situation where somebody had broken a bone or something,” Desfosses said. “But the inReach was a key element in getting us off the mountain as safely as possible, given the circumstances. Things can always go awry, and people should always have a backup plan. That’s definitely where the inReach came in handy.”