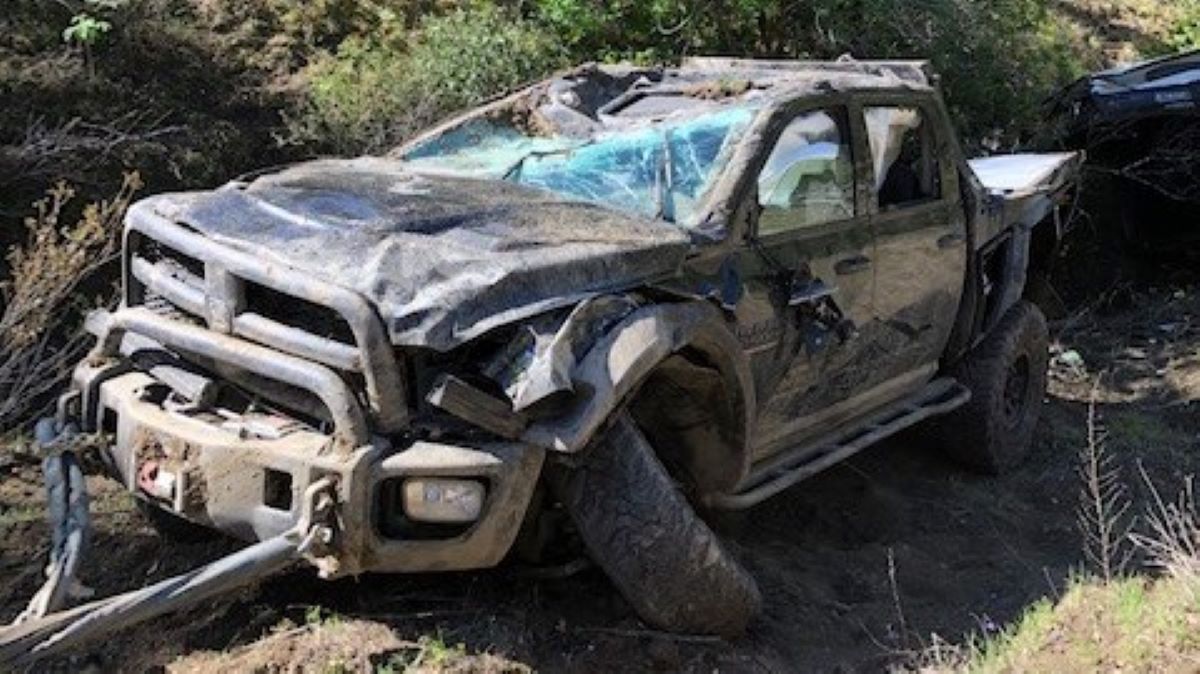 The World Turned Upside Down in an Overland Truck

Sean Silvera was hunched in his upside-down truck at the bottom of the valley after it had gone down a steep hillside — tumbling side over side, front over back, when he began to smell the fumes of leaking gas from the small tank tucked in the cab. A lot had happened in a matter of moments, but all he knew was that he had to get out.

Silvera — a contractor, traveling power yoga instructor and former Marine — was no stranger to time spent on the road. He’d driven his motorcycle to Baja and back, traveled the nation teaching yoga classes and recently completed building out his ¾-ton Ram pickup on 40” tires with heavy-duty suspension, a flatbed tray and pop-up camper. As a lover of overland travel, it was his intention to eventually start living semi permanently on the road, tackling the Pan American and driving up to the Arctic Circle.

In March 2020, however, Silvera left his house full of college-aged kids home on break to spend some time at his rural cabin in northern California about 180 miles away. By the time he got there, it was raining heavily.

The top of a hill was the only spot at the rural cabin where Silvera got a fraction of a cellphone signal. Needing to complete a few work-related tasks by end of day, he hopped in his truck to make his way up the hill. His tires were slipping in the mud, but he wasn’t too worried because the Ram had lockers and four-wheel drive.

Suddenly, though, things took a real turn for the worse.

“A branch was sticking out on my right, so I remember going just a little to the left to avoid the branch,” Silvera said. “And then, boom. The left side of the truck just flopped. Before I knew it, I was rolling.”

Silvera knew from his military training to grab the bottom of the steering wheel and get as small as he could. His seatbelt and the airbags kept him from bouncing around in the cab.

After many flips and hitting an oak tree, the truck finally came to a stop upside down in a ravine.

Once out of the passenger side window, Silvera surveyed the damage. The truck and the camper were wrecked. He had no idea where he was and no sign of a cellphone signal anywhere. Thinking quickly, Silvera reached in the window and grabbed his inReach® Mini satellite communicator, which he had mounted to his dashboard. Using the Earthmate® app on his cellphone, he texted his friend that he was in trouble.

“I only had to say a few words: ‘I had an accident. I need help,’” Silvera said. “He immediately texted back and said, ‘I’m leaving in 20 minutes.’”

Once his friend arrived, they cleaned up the site, called in a tow vehicle and surveyed the scene. It appeared that the truck had simply broken mud free on the side of the dirt road, causing it to collapse over the side and down the slope. Silvera attributes walking away from the accident to a little bit of luck, the camper taking most of the impact that otherwise may have crushed the top of the truck — and his inReach.

Could Have Been Worse

Silvera initially purchased an inReach device for some of his extended trips into rural areas.

“The first time I took it out, I was like ‘This is it. This is the answer,’” he said. “I could actually have a conversation with my wife back home and tell her I was OK or use the SOS option if my phone didn’t work in an absolute emergency.”

Now, he mounts the inReach Mini to the dashboard of all his vehicles.

“That’s the best thing, because even if I was hurt, I could reach it from where I was at,” he said.

And while Silvera made it out of the truck safely that day, he still thinks about how it could have been much worse.

“Where I was, I wouldn’t have been found right away,” Silvera said. “So if I was unconscious, I think the bears or the wild cats would’ve gotten me.”

He recommends that all people who travel in rural areas always have an inReach device.

“It’s a tool that has to be in your go bag or vehicle,” he said. “It’s just one of those things you have to spend the money on right off the bat for your own protection. That’s the one thing that can absolutely save your life out there in the middle of nowhere.”